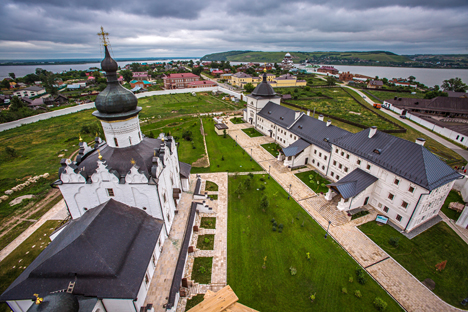 The Uspensky monastery and its cathedral in the town-island of Sviyazhsk located in Russia's Republic of Tatarstan.

Egor Aleev/TASS
The Cathedral has the world’s only fresco of horse-headed St. Christopher

The Assumption Cathedral and Monastery in the island town of Sviyazhsk in Russia’s republic of Tatarstan has been added to the UNESCO World Heritage List, UNESCO said on its Twitter account on Sunday.

"Just inscribed as @UNESCO #WorldHeritage Site: Assumption Cathedral and Monastery of the town-island of Sviyazhsk, Russian Federation," the message reads.

With an area of 62 hectares, the island town of Sviyazhsk is located on a high hill in the estuary of the River Sviyaga, some 30 kilometers from Tatarstan’s capital city of Kazan. It was founded as a fortress by Russian Tsar Ivan the Terrible in 1551 to become the first Orthodox city in the Middle reaches of the Volga River. The Assumption Cathedral was built of stone ten years later. The Cathedral boasts of having the world’s only fresco of horse-headed St. Christopher.