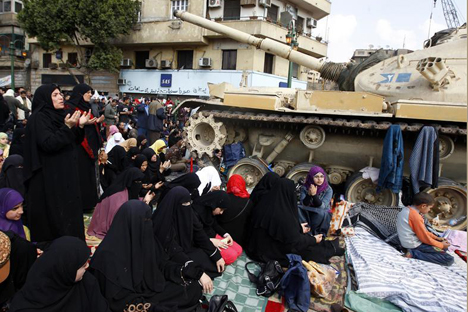 The conflict in Syria has created many refugees. Source: Reuters/Vostock Photo

There is a sizable number of Chechens in Syria, and it may not be very difficult on part of Al Qaeda and its affiliates to gear their mechanisms in enlisting support of these people in fermenting extremism in the country.

Religious extremism and terrorism is a global concern as these menaces transcend national boundaries and erode multiethnic and pluralistic socio-political structures.

In this context, it may not appear a surprise to trace a linkage between extremism and terrorism in the North Caucasus in Russia and Syria, which is undergoing a violent phase since last two years with loss of thousands of lives. The connections between the extremists of the North Caucasus and Syria raise concern as to whether the ongoing violent movements in Syria really augur well for the future of the Arab countries and rest of the world.

The protest movements in Syria were arguably started by the local populace to vent frustration at the four-decade rule of the Assad family. Hence, the movement did have an indigenous character in the beginning. But that was not the case as the months passed and as the protest movements turned violent. It was no more a genuine protest movement by the local people against a dictatorial regime, but an international hotspot of religious extremism and terrorism. The country witnessed internecine war fare between Shias and Sunnis. The Arab world was polarised along the sectarian lines with countries like Saudi Arabia and Qatar supporting the rebels and supplying their arms and money, while countries like Iran, Lebanon and Iraq opposing the violent movements to topple the Shia regime. Al Qaeda affiliate groups migrated from different parts of the world to join the rebels to wage jihad against Assad and establish a Sunni regime, with ideological sustenance from radial brands of Sunni Islam such as Wahabbism.

The North Caucasian angle became increasingly perceptible as the protest movements gathered momentum with the swelling of ranks of foreign militants. The latter half of 2012 witnessed an increasing number of Chechen terrorists joining the Al Qaeda affiliates in Syria. As per a report of September 2012, the Chechen commander Abu Omar led a group of 30 people in Aleppo and fought the forces of Assad. Another report revealed that on December 23, 2012, 39 Chechens boarded a plane from Heathrow airport at London to Istanbul in Turkey in order to sneak into Syria from the Turkish border to join the rebels. Well known Chechen radical organizations like the Association of Chechen and Caucasian Unity have established offices in Turkey, and overtly expressed support for Chechen independence as well as expressed sympathy for their radical brethrens in Syria. The organisation’s financial division, the Fund of the Chechen and Caucasian Unity collects up to $130 million every year from various fundamentalist organizations “in the Middle East, on the Arabian Peninsula, as well as in Pakistan, Bosnia and Albania” to sharpen its radical propaganda and conduct operations world- wide including in North Caucasus. Though Russia has asked Turkey to close the operations of these organizations, nothing concrete in this direction has happened so far.

Another parallel can be drawn between the Chechen situation, particularly in 1990s and early-2000s, and the ongoing Syrian crisis. While Chechnya in its earlier avatar was a centre of international terrorism with terrorists from different countries of Arab, Africa, and from Afghanistan, joined the ranks of terrorists there, and conducted many violent operations including the notorious terrorist acts such as the Moscow theatre siege of 2002 and the Beslan school siege of 2004.

Syria unless its radicalisation is not stopped urgently may turn into a new centre of international terrorism and extremism. The leader of Al Qaeda Ayman al-Zawahiri, who was on a mission to radicalize the North Caucasus, was arrested in 1996 in the republic of Dagestan. Currently, al-Zawahiri is playing an active role in guiding the Al Qaeda affiliates in Syria. As per an AFP report, there are about 6,000 foreign militants fighting in Syria under the guidance of Al Qaeda. There is a sizable chunk of Chechen population in Syria, and it may not be very difficult on part of Al Qaeda and its affiliates to gear their mechanisms in enlisting support of these people in fermenting extremism in the country. Reportedly, in August last year a bomb blast in Aleppo, a fierce site of battle between Assad and rebel forces, killed the Chechen militant Rustam Gelayev. Gelayev was son of a Chechen warlord who had fought the Russian forces. He had joined a unit of ethnic Chechen volunteers to fight along with other extremists to topple the Assad regime. Last year, the major attack on the Air Defence Brigade 602’s base in Handarat was reportedly carried out by Chechen terrorists.

Russia’s concern in checkmating downward spiral of the crisis is understandable. The swelling of the terrorist ranks is a growing concern not only for Russia, but also for all multiethnic and pluralistic countries. During the visit of Russian President Vladimir Putin to India last month, both the countries had reiterated their common position towards a peaceful resolution of the conflict in Syria. Both Russia and India confront terrorism in their regions, and the Syrian situation is of crucial significance to them. The question that has emerged foremost is how to control the radicalisation of the Syrian protest movements. The current situation is comparable to a genie that is out of the bottle. The question is not whether a new spring will occur in this Arab country, but whether the country will turn into another epicentre of terrorism like that of Afghanistan. People may not be interested in the continuance of the Assad family rule in Syria, but certainly the common people detest any transformation of Syria from a stable country into a battle zone among sects, and a field of death and destruction. The involvement of foreign militants including Chechen militants in the Syrian conflict confirm that the Syrian conflict can no more be termed a civil war, but rather a flashpoint in international terrorism and extremism, which needs urgent focus.