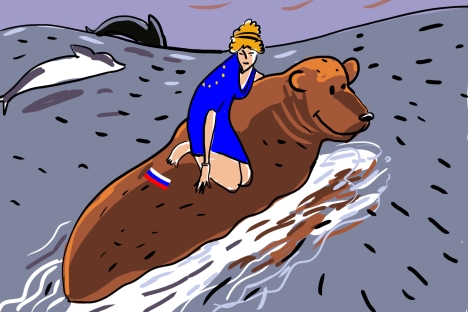 Russia has a vital interest in the success of European reforms, says Sergei Karaganov, the honorary chairman of the presidium of the Council for Foreign and Defense Policy.

Following the disintegration of communism in the early 1990s, there occurred what was then referred to as an unblocking of many conflicts, which had been obstructed by the structural confrontation between the Soviet Union and the United States (then known as East and West, respectively).

First to explode was Yugoslavia. A conflict then flared up in Pridnestrovie and, later, in Chechnya. Russia, because of its post-revolutionary weakness, and the West, because of its euphoria after apparent victory in the Cold War, let pass the receipt of nuclear arms by India and Pakistan, which restarted the previously suspended mechanism for their further proliferation.

Fortunately, not everything unblocked and everyone could breathe easy. However, around 2005, there began a “second unblocking” — a belated consequence of the collapse of the bipolar world.

Genuine globalization — the first ever in our history — led to the explosive growth of the Asian periphery, which for some 200 years had been under the control of the West, under the control of Cold War rules and institutions, and/or vegetating in poverty and weakness.

The rise of “the new Asia” turned out, predictably enough, to be the rise of national states with their own interests and phobias. This region began to form its own brand of geopolitics, rather than one imposed or suggested by outside forces.

This process was qualitatively strengthened by the slow defeats of “the old West,” which had held sway in the world for nearly 500 years. These defeats began with the logically inexplicable adventures in Iraq and Afghanistan; they have developed with the structural economic problems in the U.S. and the EU, which surfaced as a result of the international financial crisis of 2008.

But the most important thing is that they are becoming evident, owing to the inability of Western democracy — in the humane-liberal, semi-socialist form it has taken in the 21st century — to solve serious structural problems.

Military-political passions are beginning to rage in Asia around hitherto unknown reefs. Nations are increasingly lodging old claims against each other. An arms race (primarily naval) has begun in Southern and Eastern Asia. Within the region, one sees the outlines of ten potential conflicts and one entirely real one — between India and Pakistan.

The results of this second unblocking look even more alarming, in the context of another Asia — the expanded Middle East. The weakening of outside control has brought to the surface old and new suspicions, the religious differences that have accrued over the years of outside domination, and a hatred for the outside world (primarily the Western world, including Christianity). This region has entered a phase of wars, social degradation, and the rise of religious and national fanaticism.

Intolerably terrible for the world and for Russia would be a “third unblocking” — the collapse of the European Union. The EU, after all, was created by great Europeans so as to bury the history of European state nationalism that caused hundreds of wars and led to two totalitarianisms — communist and Nazi.

They have succeeded in a fantastic number of things. Europe, the source in the last centuries of primary threats to itself and to the rest of the world, has become the world’s mightiest outpost. Russians, with our history of wars with Europe and in Europe should be especially grateful to the fathers of the European-integration project.

However, the successors of the great founders (the Frenchmen Jean Monnet and Robert Schuman, the Englishman Winston Churchill, the German Konrad Adenauer, the Belgian Paul-Henri Spaak), now that they have achieved success, have been resting on their laurels and have not noticed — not counting the Germans, the Swedes and some other Northerners — the competitive challenges of the new world.

An even deeper transformation is inevitable in the near future, which is already here. Much in the socialist state will have to be dispensed with, in order to become competitive again. This will inevitably lead to the need to change internal political institutions — from the current, almost boundless semi-socialist liberal democracy to something far tougher.

Russia has a vital, existential interest in the success of Europe’s unavoidable reforms, in the building of European integration not collapsing. Russia does not want a third unblocking. It does want to be faced with — in addition to the increasingly dangerous South and alarming East — an unstable and newly hostile West.

The first unblocking has come about. The second is only now taking place: it involves many challenges and dangers, and it must be controlled. The third must not be allowed to happen.

Sergei Karaganov is the honorary chairman of the presidium of the Council for Foreign and Defense Policy. First published in Russian in Vedomosti.ru