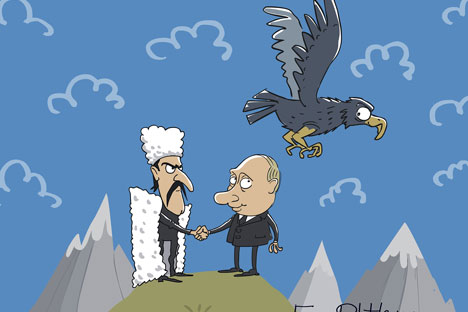 President Putin has called on Ramazan Abdulatipov to head Russia’s largest and most dangerous region in the North Caucasus. The new Dagestani leader is well-connected with Russian political institutions, but will Moscow be able to support his ambitious plans to stem corruption, terrorism and organized crime in the multiethnic republic?

Click to enlarge the cartoon. Drawing by Sergei Yolkin

The news instantly became a major talking point in Russian domestic policy. And this is no small wonder: Dagestan is the largest multi-ethnic republic in the North Caucasus, and it plays a key role in ensuring the stability of the whole region. This task takes on added importance on the eve of the Sochi Olympics. Massive destabilization of the North Caucasus would bring into question not only the choice of Sochi as the Olympic venue, but also the effectiveness of the Russian state as a whole. Secondly, in terms of the number of terrorist attacks and acts of sabotage, Dagestan has been the leader amongst the North Caucasus republics for many years.

In 2011, 413 people died and 411 were injured because of violence that took place in the republic. While the number of victims dropped by almost 15 percent in 2012, the republic still has the dubious honor of being the most dangerous region in Russia. Consequently, January saw the assassination of one of the republic’s Supreme Court judges, Magomed Magomedov – the same judge who delivered the verdicts in the high-profile case concerning the Kaspiysk bombing, which took place on May 9, 2002.

The buzz around the new appointment added fuel to the fire. In the week preceding the publication of the presidential decree, speculation was rife in the media about the coming resignation of Magomedsalam Magomedov. There was no official comment on these reports from the Kremlin or the federal government, which provoked more rumors and speculation.

Indeed, the reasons for the new appointment are not entirely clear. Is it because the Russian leadership is not pleased with Magomedov? Probably, considering he was sacked two years before his term was due to end in February 2015. On the other hand, his dismissal may be seen as a promotion, since he will now become deputy chief of the President’s staff.

Formally speaking, this is a step forward: the former head of Dagestan will continue his career at the federal level. However, if this is the case, why were Abdulatipov’s early pronouncements pointedly critical of the previous team? The new leader promised to dismiss the republic’s prime minister and the whole republican government. One wonders who he is going to replace them with.

It is also noteworthy that, from the very first hours in his new position, Abdulatipov started fostering inflated expectations amongst the region’s people. He claims to be able to clamp down on clientelism and corruption, organized crime and terrorism. Yet Dagestan has been in turmoil for a very long time. The political and social features of the largest North Caucasus republic have been shaped over the course of many years; their roots go back to the periods of Soviet and Imperial Russia.

Things were not happening because of or in spite of the personal contribution of this or that leader. Many factors – overpopulation, a shortage of land, migration to neighboring regions – stem from the features of modernization and urbanization in the Caucasus, as well as the crisis of the traditional, rural way of life in the “country of mountains” (the meaning of the word “Dagestan”).

Still, one of the pros for the new leader is that he is far better integrated into the Russian political establishment than his predecessors. Although he was born in Dagestan (he is an ethnic Avar from Tlyaratinsky District), the highpoints of Abdulatipov’s career have been achieved outside the republic; he has been a permanent presence on the Russian political scene ever since he joined the Nationalities Affairs Department of the Communist Party of the Soviet Union in 1988. The list of posts he has occupied includes deputy, chairman of the Russian Supreme Soviet Nationalities Council, State Duma deputy, deputy prime minister and federal minister, member of the Federation Council and Russian Ambassador to Tajikistan.

Throughout, Abdulatipov has never lost contact with his historical homeland. In 1991, he took part in resolving ethnic tensions between the Chechens and Avars in Dagestan; he also chaired the parliamentary commission for the release of those who were taken hostage or went missing during the armed conflict in Chechnya. In short, he is very well-versed in the affairs of the region, though he is not party to the relations amongst ethnic clans.

The downside is that the new leader in Dagestan does not have a team. In the context of the Caucasus, this hamstrings any leader. Furthermore, unlike neighboring republics, Dagestan does not have a “vertical power structure.” It is a complex conglomerate of ethnic groups and various currents of Islam – Sufis, Salafites and “unofficial Muslims” who shy away both from terrorists and from the official clergy. City mayors (notably those of Makhachkala, Derbent, Khasavyurt and Kizlyar) are forces in their own right that any republican leader will have to reckon with.

Thus, Moscow’s role is key. Will the Kremlin be willing to support its appointee, who was delegated to Dagestan to strengthen its statehood? This would go a long way in determining his success, because many in the republic see Moscow as the arbiter in difficult disputes and in resolutions of local contradictions.

Sergey Markedonov is a Visiting Research Fellow with the Center for Strategic and International Studies (Washington, USA).