Stalemate in Syria buoys dominance of Russian gas in Europe 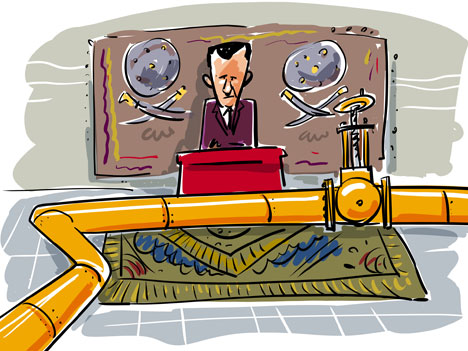 The outcome of the war in Syria may have far-reaching consequences for the European gas market, as the parties in conflict are backed by rival states — Iran and Qatar — hoping to build a new pipeline to the EU via Syria. The battles for Aleppo and Damascus may inadvertently determine the fate of Gazprom and Russia’s future energy revenues.

The civil war in Syria, which is now in its second year, is usually discussed through the prism of human rights. When it comes to the geopolitical dimension, the talk is usually about the struggle between the major regional players for influence in the Middle East.

However, another theme that has long been quietly discussed by the military and diplomats in various countries engaged in resolving the Syrian crisis is being kept away from the public eye — the energy dimension to the Syrian conflict. The armed conflict in the country is in many ways an echo of the struggle between the major players on the world gas market. The main prize on that market is access to the largest and most generous European gas market.

In the 2000s, Qatar, which has the world’s third-largest known gas reserves and the world’s largest undeveloped Northern Field (called Southern Pars in Iran, which also has access to it), has staked on increasing LNG supplies. Tanker shipments of LNG make Qatar more independent in terms of market diversification.

Even so, considering its geographical position, its revenues depend crucially on security in the Persian Gulf region. In the event of a conflict between Iran and the West, Tehran threatens to close the Straits of Hormuz, through which all Qatar gas tankers pass.

Qatar is thus seeking to build pipelines bypassing these Straits. It has been studying the option of building an overland gas pipeline to Europe since around 2008. The resource base for the new pipeline could be the Northern Field, and the pipeline could bolster the emirate’s claim to the field. Now that Tehran has had to suspend development of its part of the field under the pressure of sanctions, Qatar has a chance to get in first.

Qatar needs the consent of only three countries: Saudi Arabia, Jordan and Syria. Syria, under Bashar Assad, is the only difficult section of the pipeline. It is no wonder that Qatar is one of the main instigators of the war against the Syrian regime.

In addition to active public diplomatic efforts, according to unofficial data, the Qatar government is rendering massive material assistance to the Syrian opposition.  Its victory in the civil war would remove the last obstacle to a gas pipeline from Qatar to the Mediterranean coast. This might also explain the actions of the EU countries.

Still, the Syrian regime has a powerful ally in Iran.

The Iranians have long harbored plans to build a gas pipeline to the coast of friendly Syria, enabling Tehran to take its gas to world markets. Due to the international sanctions imposed in response to Iran’s nuclear program, Western investors are afraid to invest in hydrocarbon projects on its territory; EU countries would not even discuss the option of buying its gas.

Bringing gas to the Mediterranean coast might solve that problem. Even if Western energy companies refuse to buy Iranian crude at source, Tehran could always sell its gas to Europe through second or third parties.

In this context, the Middle East crisis might play into Russia’s hands: the stalemate in Syria quite suits Moscow. If the opposition fails to topple the Bashar Assad regime, there would be no question of a gas pipeline from Qatar to Turkey and Europe. Even so, Moscow does not stand to gain much from an unqualified Assad victory either. As long as the civil war continues, there is no question of an Iranian pipeline in Syria.

This might explain the fact that Moscow’s assistance to its last ally in the Middle East has been confined to its firm stand on the U.N. Security Council, preventing the West from launching legal intervention or imposing a no-fly zone as it did in Libya.

While Qatar, Iran and the EU are fighting over Syria, Gazprom continues to develop its mega projects — Nord Stream (the third and fourth spurs are under discussion) and South Stream (construction of the underwater part has yet to begin). If Russia builds them before the war in Syria ends, Moscow might retain its position on the European gas market, which has an inestimable role to play in replenishing Russia’s budget.