Could the Russian economy withstand a U.S. default? 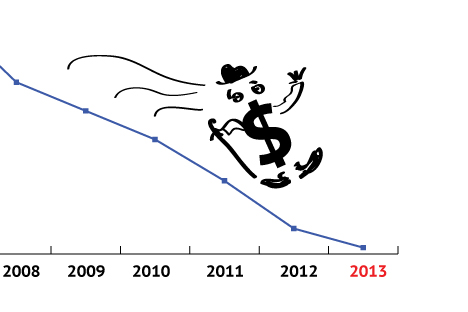 Investment fund CEO Stanislav Mashagin analyzes the likely consequences of a U.S. total default. While the initial shock of such a default would mean temporary stock market closure and vanishing chunks of the world’s wealth, the expert argues that Russia’s economy — armed with experience from past crises — would weather the storm.

In general, it is senseless to discuss the likelihood of the U.S. defaulting on its obligations, because it is impossible to assess. The worst-case scenario is a total default, which is more than possible.According to experts, the current demand on American households exceeds incomes by $3 trillion every year. The deficit is partly financed by increasing the federal debt.

The U.S. increases its debt by more than $125 billion every month to service its current debt. As of today, the U.S. national debt ceiling is at $16.394 trillion — that ceiling was exceeded on December 31, 2012. The U.S. Department of the Treasury took measures to continue servicing the debt until May 19, 2013. Standard & Poor’s, Moody’s Investors Service and Fitch Ratings have not ruled out downgrading the U.S. rating in 2013 because of budget and debt problems, which would further increase the cost of servicing the debt and, consequently, the debt itself.

Initial consequences of a U.S. default

The early consequences of a total default would be the suspension of settlements in the government bond sector and payments in U.S. dollars. This would be followed by a U.S. stock market slump and its closure for several days. The fall of other world indexes would be automatic. World GDP would plummet and demand for raw materials would evaporate. Nobody would buy oil, gas or steel over a certain period.

A halt of settlements in the Forex market could be possible. Everything would depend on how quickly the central and commercial banks and major funds could determine the main settlement currency. Settlements would most likely continue with euros, British pounds and Japanese yen as the basic and most liquid currencies.

Then money would be cashed, which would significantly speed up inflation: money mass would grow and national currencies would be devalued.

A halt in settlements in U.S. bonds and a drop in stock exchange indexes would inevitably and inexorably bring about the total bankruptcy of the majority of world banks and funds. A huge chunk of the world’s “wealth” would simply “disappear.”

Russia after the first month

Russia today is more vulnerable to a global economic shock than it was in 2008 — in particular, because the Reserve Fund has been depleted and the budget is more dependent on oil. Before the crisis, the Russian budget was balanced, with oil prices at $50-60 per barrel. To balance the budget today, however, the price of oil has to be $120, according to some estimates. About 40 percent of government revenue is generated by oil and gas, and the Russian budget as a whole depends on commodity prices.

Following a U.S. total default, budget revenues will fall proportionally to fallen commodities prices, and the Finance Ministry would have to cut spending — a very painful measure. Social transfers would surely diminish, further weakening the already sluggish demand that would no longer be shored up by huge government spending.

Next, all export-oriented business activity would fall. Producers oriented toward internal demand would get a temporary respite (as was the case in 1998), and the food industry might increase its turnover somewhat. In the internal market, the situation would depend heavily on the payment of wages and pensions, as no other sources of demand — such as credit and state expenditure — would exist.

To some extent, Russia would benefit from the fact that direct and portfolio investments in the country were at a very low level; the net outflow of capital (currently $80 billion a year) may even diminish because of uncertainty. Thus, Russia already has an insurance cushion consisting of “bad news,” so that a possible decline would be less destructive.

However, after the initial shock wore off, Russian companies would continue to supply gas, oil and metal to the European Union and China on tougher terms of settlement in various currencies. This is because there would be no consensus on the universal equivalent and market value. Accordingly, budget revenues would gradually recover.

The Russian Central Bank’s currency exchange policy would most likely be as follows: it would choose a new currency to which it would peg the rate of the ruble. Obviously, it would be the currency that remained most stable during the period of turbulence. Perhaps a “shrunken” dollar or the euro, but it could also be a basket of currencies, including some new ones. As soon as the system of currency coordinates emerged, the driver of the Russian economy — commodity exports — would be back with a vengeance. Commodity exporters would get a chance to become real world players.

The Russian banking sector would revert to the Soviet model where, after the bankruptcy of the entire sector, 100 percent of the assets of the remaining banks would be cleansed and consolidated within 2–3 state banks not involved in world financial markets: Sberbank, Gazprombank and Rosselkhozbank. Perhaps the state corporation Vneshekonombank would be preserved to deal with non-standard transactions.

The Russian budget and the state-owned companies would try to mitigate the consequences of the fall of household incomes; the country would see “new jobs” and payments to households from the modest budget, as in previous times during the most difficult economic years. Government spending, in addition to pensions and state company spending, would, with the exception of partially reduced tax and wage payments, be terminated instantly. This would preserve some liquidity in the first month.

On the whole, Russian companies and government bodies would feel very comfortable in this absolutely catastrophic economy. The experience of the worst crisis years of 1992, 1998, 2004 and 2008 has equipped them with some useful tools consisting of rules and schemes of operation.

Stanislav Mashagin is president of the Personal Strategies investment fund.