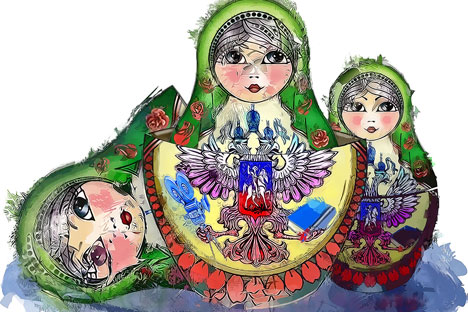 The Russian media constantly reports about growing government interest in increasing Russia’s soft power. Existing public diplomacy instruments reach a permanently growing global audience, but Russia’s international image does not seem to be improving. The problem may be that people around the world understand Russia’s values but still disagree with its policies.

Click to enlarge the image. Drawing by Javier Aguilar

During the Cold War, Soviet propaganda was a powerful vehicle of global confrontation. After the bipolar world ended, Russia switched off almost all instruments for communication with the foreign public: the country was on the verge of bankruptcy and there were more urgent agenda items to be handled. Besides, the new Russia was so euphoric about the future of global affairs that it hardly saw any use in yesterday’s instruments of confrontation.

That situation changed several years ago when the new Russian leadership felt that their actions were misunderstood in the West. President Putin started a revival of the RIA Novosti state news agency and established a new international TV channel, Russia Today. With the establishment of annual meetings between Valdai club experts and Vladimir Putin, as well as the nomination of the Russian town of Sochi as the 2014 Winter Olympics host city, the number of foreign communication projects continued to grow.

2013 will not be easy for Russian diplomacy

In 2007, “Russkiy Mir” (“Russian World”) Foundation was established to promote Russian language abroad. It was later joined by a foundation for public diplomacy that was named after the 19th-century Russian chancellor, Alexander Gorchakov. The Russia Beyond the Headlines media project also became a critical part of Russia’s foreign communication system. All of these agencies report significant success in their domains of establishing broad contacts with foreign audiences. Are there any benefits resulting from those policies?

There are two main approaches to a country’s international image. One approach is encapsulated in a term coined by renowned political scientist Joseph Nye Jr. — “soft power.” Soft power is defined as power to achieve political results by attraction, rather than by coercion or money; it works for countries just as well as popularity and reputation work for people. Another popular approach is called “nation branding.” The same way a product brand brings with it certain perceived qualities, a brand of country impacts national exports, investment, talent and tourism attraction.

There is no evidence that either Russia’s soft power or its brand have improved in the last few years, which raises questions about the effectiveness of national public diplomacy efforts. Neither public opinion polls nor investors’ interviews demonstrate significant progress. Most companies can hardly boast of Russian image as a booster. According to Igor Balk, managing member at Global Innovation Labs, the IT industry is one of the few sectors of the economy that is not being damaged by Russia’s poor international image.

"Kaspersky, ABBYY, Yandex are globally competitive. Usalytics will soon revolutionize the Internet marketing industry," says Balk.  "How many global players of Russian origin can be named outside IT and natural resources?"

When a mechanism is not working the way it was expected to, there are two questions to ask. First, is it functioning? Second, is it being used the right way? The public diplomacy mechanism seems to be working well in terms of absolute numbers, as people all over the world are increasingly reached by Russian international print and broadcasting media.

However, it is hard to say that Russia’s image is improving, despite increasing efforts. Growing viewership or readership numbers do not necessarily result in improved attitudes. The reason is obvious: media can be used as a tool of sharing one’s perspective and eliminating misunderstandings, but what if there are no misunderstandings? Just like two people can understand each other quite well and still feel disaffection, foreign publics can understand modern Russia well enough and still dislike its policies.

The United States faced a similar problem shortly after the tragedy of 9/11. Trying to improve Muslim attitudes toward the U.S., the latter multiplied its public diplomacy efforts in the Middle East. However, the problem was not just a distorted perception, as American politicians had thought. As experts and practitioners later realized, many Arab audiences admired U.S. culture and the American way of life, but disagreed with U.S. foreign policy in the region. What the U.S. needed was a change in policy, not an explanation of it.

The same may be the case with Russia. Russian culture was ranked in the top 10 (out of 50) by respondents of the Simon Anholt Nation Brand Index, whereas Russian governance did not even make it in the top 20 (ranked 43rd in the U.S. in 2009).

Ironically, Russian public diplomacy is not focused on culture and values, which could create an atmosphere of trust. Instead, Russia’s public diplomacy mainly concentrates on policy coverage, which may be helpful but insufficient. According to Pew Research Global Attitudes Project, between 2007 and 2012, the number of people saying they are largely favorable toward Russia decreased in 17 countries and increased in only three (out of 27 where data is available for more than one year).

Meanwhile, the number of people who have an unfavorable view of Russia increased in 20 countries and decreased in just two. This cannot be explained simply by a lack of mutual understanding or by media bias, since the same negative change was diagnosed even in Russia itself.

In trying to revive the Soviet international communication experience, modern Russia forgets a very important part: it was not the propaganda that made the Soviet Union popular in certain parts of the world. It was the policies — international development, construction, education.

Communication tools were only a means of spreading the message. Rebuilding sophisticated communication mechanisms can help Russia to promote its culture and values, but not the policies. Those need to reflect other countries’ views for the soft power quest to succeed. Russia has built an effective mechanism of distributing a message. Now it needs to enhance it by developing two-way communication with foreign publics and considering outsiders’ opinions in the policy development process.