Syria on the eve of a bloody anniversary 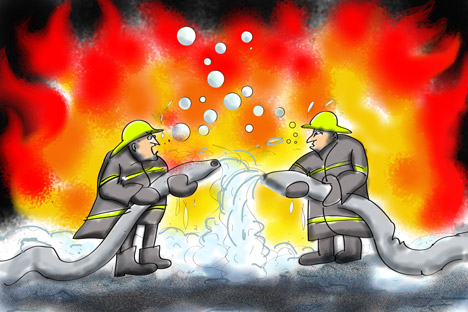 March will mark two years since the beginning of anti-government protests in Syria. Though it is increasingly clear that the West and Russia must work together to resolve the crisis, they still seem to favor different approaches. Russia, on principal, is against external interference, while the U.S. is pushing Moscow to support political transition in Damascus.

Syria is back in the headlines after a brief hiatus. Not that any progress has been made in the country: it is still mired in a military and political deadlock. However, key international players are beginning PR preparations for the approaching anniversary of Syria’s internal conflict. After all, it will no longer be possible to blame Bashar Assad alone for the two years of bloodshed.

U.S. President Barack Obama has demonstrated a balanced approach. In an interview with The New Republic magazine, he asked a rhetorical question: “Could it [a military intervention] trigger even worse violence or the use of chemical weapons? And how do I weigh tens of thousands who’ve been killed in Syria versus the tens of thousands who are currently being killed in the Congo?”

In an interview with CBS, Obama offered a reply to this question: “And Syria is a classic example of our involvement; we want to make sure that not only does it enhance U.S. security, but also that it is doing right by the people of Syria and neighbors like Israel that are going to be profoundly affected by it. And so it’s true sometimes that we don’t just shoot from the hip.”

In other words, there will be no direct intervention. Still, the situation in Syria is so bad not because of U.S. avoidance of openly helping the armed opposition that is increasingly associated with Al-Qaeda. The problem is that Russia openly supports Damascus — or, more precisely, Syria’s President Bashar Assad.

U.S. Department of State spokesperson, Victoria Nuland, said on Jan. 28: “There are a number of steps that Russia can take. It can firmly and publicly cut off the [Assad] regime’s supply of Russian weapons — especially attack helicopters. It can cut off Assad’s circle of access to Russian banks. It can actively support a political transition and work with us on who can come next, who can keep the country united and take it on a democratic path.”

This statement is only partially true. To speak of a civil war in Syria is wrong, according to Boris Dolgov, senior researcher at the Institute of Oriental Studies of the Russian Academy of Sciences. Syria’s government troops are not fighting armed citizens, but rather well-trained combat units financed and supplied from abroad. How would they otherwise have been able to fight the regular Syrian army for two years?

It is hard to argue with Bashar Assad, who told the Lebanese newspaper Al-Akhbar a few days ago: “Shutting down Syrian borders for weapons and contraband would have solved the problem in a couple of weeks, because there would have been no more sources of money and arms.”

Nuland’s grievances against Russia have a political dimension too. Moscow has repeated, on more than one occasion, that it is not exactly fond of Assad. Russia’s Foreign Minister Sergey Lavrov reiterated this much in late January.

“We were never enamored with this regime and never supported it,” Lavrov said. “And all of the steps we took that were aimed at facilitating the implementation of the Geneva Agreement on the formation of a transition governing body confirm that we want the situation to be stabilized and conditions created for the Syrians themselves to determine the fate of their leadership, their people and their country. That’s what our position is all about, rather than about supporting any specific side in this tragedy.”

The essence of the disagreements between Moscow and Washington is that Russia (as well as China) opposes regime change through external military, political or economic pressure. This is a matter of principle.

The United States, meanwhile, is apparently inviting Moscow to agree on who is going to be Syria’s next president — that is, to “squeeze out” Assad together. This is certainly a tempting proposal, because the Kremlin, despite locking horns with Washington over the issue of human rights in Russia, is openly declaring its readiness for cooperation on an equal basis on a broad range of issues.

In his interview with СNN at Davos on Jan. 27, Russia’s Prime Minister Dmitry Medvedev confirmed that Syria’s future is a subject of the Russian-American dialogue. “There are no irreconcilable contradictions in our positions,” said Medvedev. However, he repeated that the Syrian people are the ones who should decide Assad’s fate. “Not Russia, not the United States, not any other country,” the prime minister said.

Medvedev’s reply does not quite clash with what Henry Kissinger — a veteran of American foreign policy — had to say at Davos. Kissinger called on the United States and Russia to work together to resolve the crisis, emphasizing the need to step carefully. If the outside world intervenes militarily, he noted, “it will be in the middle of a vast ethnic conflict; and if it doesn’t intervene militarily, it will be caught in a humanitarian tragedy.”