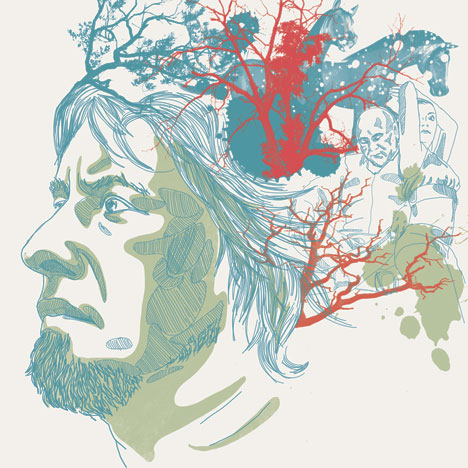 Russian-American writer Alexaner Genis and RIR's Nora FitzGerald reflects on the books of Vladimir Sorokin, Russia's prominent writer who has created a language of violence and terrible beauty.
prevnextprev_picnext_picpaginator_prevpaginator_nextcontent_pagepage_number

Click to enlarge the cartoon. Drawing by Natalia Mikhailenko

The short-list for the international Booker Prize is comprised of ten writers from nine different countries. Vladimir Sorokin was chosen to represent Russian Literature. In my view this is at it should be, as Sorokin is the only one, except perhaps Fazil Iskander, who deserves not just the Booker Prize, but also the Nobel Prize.

But that’s just what I think.

Many people don’t like Sorokin, sometimes they hate him and more often than not they don’t understand him, mistaking the views of characters for the author’s own. There is so much blood and pain in his books that they are both hard to read and hard to put down at the same time.

Like Tarantino, Sorokin has developed a certain language of violence, which helps him to engage his readership and take hold of their subconscious.

“I am always writing about Russian metaphysics,” Sorokin once acknowledged and of course he was right.

The science of looking beyond the physical studies the original, fundamental, unmoving reality – that which is not visible to any eye that has not experienced pain. In this dark kingdom of eternal forms, Vladimir Sorokin the veteran Platonist reveals the national archetype.

He is helped by his temperament, which constantly puts him at odds with the authorities.

Sorokin plays the same role in the literary process of our generation as Solzhenitsyn played in the 1960s. But while Solzhenitsyn created and documented the past, Sorokin concentrates on the future.

The earlier writer sought the roots of tragedy, while Sorokin predicts them. But ultimately both writers are after one and the same thing – the truth.

For Solzhenitsyn, ‘not living a lie’ meant revealing what the authorities hid, whereas Sorokin wants to reveal the truth that language hides from us.

And here their paths part for good – it is this distinction that explains why Solzhenitsyn spoke out after time had passed, whereas Sorokin listens to the times - he concentrates on the present.

Sorokin thinks in layers and writes in the cycles of opuses. Having touched on a raw nerve, a sore point of our time, Sorokin won’t leave it alone until it has stopped aching.

While in his early books (the best of them being “Marina’s Thirtieth Love” and “The Norm”) he examines the semiotics of totalitarian power and the linguistic mechanisms of repression, later Sorokin has stepped away from brilliant conceptual experiments in favor of autocratic utopias.

Having set out the boundaries in “Day of the Oprichnik,” in rich prose Sorokin elaborates on a Russian nightmare with a Chinese twist.

Like Swift or Orwell, but even more like the Strugatsky brothers, Sorokin laughs at the familiar and invents a fantastical realm. Able to condense five centuries of history, Sorokin describes reality in the context of the eternal.

Life, confined into the only form possible for it, is doomed to last indefinitely. At least until the oil runs out. What happens next is described in his latest book “The Blizzard.”

Using Leo Tolstoy’s story “Master and Man” as a starting point, introduces his favorite technique in  his writing repertoire – the literalization of metaphors. So in Sorokin’s work the “malenky chelovek,” the small man of Russian literature, has become even smaller.

Now he fits on a dish, drinks out of a thimble, but swears like a trooper.

The main characters in “The Blizzard” spend day and night fighting their way through a blizzard and spend their life on a road that is packed full of dangerous escapades, torturous imaginings, amorous adventures, drug-induced highs and discussions on the nature of good, evil and the nation.

But the landscape stays the same, which is why nothing is visible, like on the metro. This is why the destination becomes increasingly murky, and the only thing that’s important is the journey itself, the road, which is ever more hard to find.

In Sorokin’s post-apocalyptic world everyone is going somewhere, but no one is moving. In his early work this oxymoron was illustrated by a queue, in his more mature works the metaphor for this is a blizzard. Eternal and indifferent, it seems like a natural obstacle, but the physical challenge in the book turns out to be metaphysical.

In this small masterpiece Sorokin does not defile the great Russian literary tradition, he just summarizes it. Coachman Verkhushka is not merely a composite image of a nation capable of bearing great suffering, but a nation that is impotent.

Doctor Garin personifies all the do-gooders in the liberal tradition. True to his duty as a doctor, he makes a vaccine, which prevents the Colombian Plague, which turns people into zombies (cocaine?)

On the way Garin goes through all the challenges typical for a member of the intelligent class. He gives in to passing desires, becomes good friends with a coachman, punches his face, seeks redemption and finds it in the throes of hell.

Under the influence of a psychedelic potion, Garin explores an underworld where reality is exaggerated, where he, as we were promised several times, is fried in vegetable oil. Neither public confession, nor impassioned prayer, nor empty threats stand a chance of saving him from these terrible tortures.

But then, having come to his senses, Garin again experiences a religious reverence for his return to normal life and buys two portions of the potion, which is strongly reminiscent of Dostoevsky’s novels.

And it keeps snowing, the coachman is freezing, the doctor isn’t going anywhere. The space that has been made alien by snow remains alien and strange. Like all Sorokin’s latest opuses, “The Blizzard” finishes with Chinese intruders, when the new master of life rides into the distance on a three-storey-tall horse.

In order to appreciate Sorokin’s phantasmagoria, readers need a basic knowledge of the Russian classics Sorokin stylizes and interprets. This is why Sorokin’s work is hard to translate, but not impossible, as proved by the success of his books abroad, especially in countries with a totalitarian past – in Germany, Austria and Japan.

In the United States it is harder for people to understand Sorokin, but the recent release of his books, first and foremost the “Day of the Oprichnik,” in English, has opened up the sharpest voice in contemporary Russian literature to an American audience. A Booker prize would not be out of place here.

If Vladimir Sorokin spent more time in the United States, the acclaimed author would surely develop an even larger cult following: His appearance alone confirms the American idea that Russian writers are rugged and serious non-comformists emanating noble elegance.

Sorokin’s fiction fulfills a more rigorous role, however, bearing witness to society’s ills through the creation of violent myth and grand metaphor. Here is a primer for acolytes following him in English:

“The Ice Trilogy” (NYRB Classics)—The three-novel opus is a departure from Sorokin’s earlier works and represents a resurgent realism in Russian literature, according to critics.

“Sorokin is best when in the detailed evocation of individual psyches,” according to RBTH literary critic, Phoebe Taplin. “He seems equally at home mimicking businessmen or anarchists, web designers, chemistry professors or members of a new age cult. “

For the uninitiated, Sorokin’s fiction is known as brutally and repetitively violent. He is deeply controversial in Russia, so much so that his denouncers once invited people to throw his books into a mock public toilet.

“Day of the Oprichnik”(Farrar, Strauss & Giroux 2011)—This high-tech fairy tale has been compared to a performance art piece; in its form, it echoes Solznitsyn’s “One Day in the Life of Ivan Denisovich.” But in its content, it is truly singular.

According to Taplin, “Sorokin uses a spicy mixture of archaic Russian terms and futuristic slang. His characters drink kvass and eat kasha, while driving high-end cars (mercedovs) decorated with the traditional oprichink symbols — a severed dog’s head (to bite the tsar’s enemies) and a broom (to sweep them away).

“The Queue”(NYRB Classics)—Released in English in 2008, the novel tells the archetypal Russian story of the line that winds around the city streets  even though no one knows what’s at the end of it.

Miniature vignettes, snatched dialogue and small dramas create a Kafkaesque vision of a permanent, static life in a line—one that never quite explains itself.

Sorokin is not the only writer to explore this theme: Olga Grushin’s “The Line” offers an historical version of this lemming-like behavior and the existential attachment to standing and waiting.