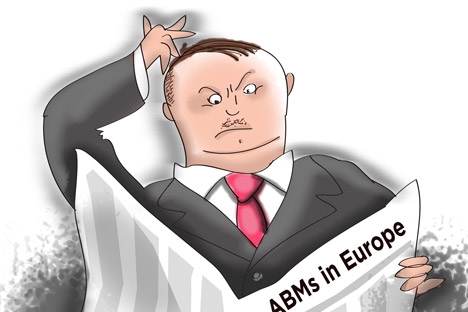 Leaked U.S. Defense Department studies cast doubt on whether a multibillion-dollar missile defense system planned for Europe will ever be able to protect the U.S. from Iranian missiles as intended, AP reported on Feb. 9. Is this a signal to Moscow that Washington is now ready for a compromise on the issue?

The idea of the United States being ready to modify its stance on regional anti-ballistic missiles (ABMs) has been in the air since another “leak” situation arose recently.

With a microphone that was supposed to be switched off [at a nuclear security summit in South Korea in March, 2012], U.S. President Barack Obama told Russian Prime Minister Dmitry Medvedev that he would have more flexibility on missile defense once re-elected. However, it would be a mistake to think of this matter as purely situated in by the context of Russian-American relations. This issue brings in several aspects — both internal and external.

First, it should be understood that the study conducted by the Pentagon is a pure manifestation of the rationality with which America tries to pursue its policies: Cost-benefit analysis is the primary foundation of the report. In turn, the fact of the “leak” itself could be regarded as a signal to Russia.

U.S. to propose further cuts on nuclear in Moscow

When thinking of this report, one has to take into account that the American economic situation is not in perfect shape. The “fiscal cliff’ has been avoided for the moment, but measures taken remain inadequate. There is a need for further cuts in possible expenses. The optimal option is to cut those expenses that are less useful for current strategic balance — i.e., nuclear weapons.

The era of nuclear containment being at the heart of international security is way back in the Cold War period.

Today, only Russia itself seems to retain this at the core of its strategic thinking. Meanwhile, Washington is relying more on high-precision conventional weapons — weapons based on new physical principles and new areas of warfare. Thus, a nuclear arsenal, even though remaining an important part of strategic military balance, has a lower position amongst the aims of military developments.

Thus, the ABM issue should be linked with another idea floating in the air on the continuation of nuclear disarmament negotiations, which could save up to $8 billion per year for the country’s budget. Since the most vocal demand on the part of Russia is exactly the issue of the Euro-ABM, this “secret report leakage” could be judged as a signal to Moscow to be more positive about the possibility of such talks.

Another aspect has similar financial roots, although it is more about Europe than Russia. These days, Washington’s efforts are directed more toward the Asia-Pacific region, and fewer voices — both in the political and military domain — consider it worth spending similar means and having as many forces in Europe. Confronted with financial limitations, Washington is simply restructuring its foreign policy burdens, and Europe’s place is becoming bleaker.

Meanwhile, if we look at it from Russia’s perspective, internal and external parameters can also be seen. Due to a lack of policy options, current leadership prefers to have a manageable level of conflict in relations with the United States. the presence of a “safe external enemy” is a pretext for consolidating Russian society.

This is why, even with the possibility of a compromise on European ABM in the air, there are already voices heard within the Russian expert community claiming that  this could be proof of another conspiracy to render Russia’s nuclear arsenal impotent.

On the other hand — taking into account the recent deterioration in bilateral relations, and the fact that it is not in Moscow’s interest to have a real, uncontrolled spiral of conflict between the two countries — it would be wise to use this very opportunity to sustain working relations with American counterparts.

It would be wise to present the opportunity as a positive development and make real the latest talk about the necessity of forming a comprehensive and inclusive Euro-Atlantic community (with Russia included). This is necessary for balancing Russia’s active turn toward Asia and emerging countries, especially since Russia does not have a full convergence of interests with either set of partners.