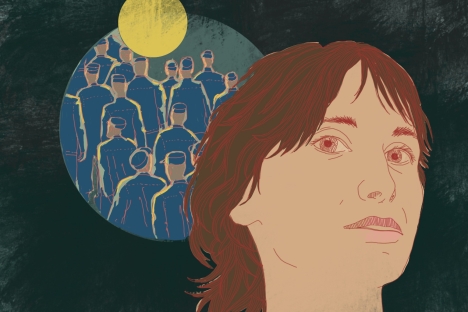 Victoria Lomasko teaches painting lessons in juvenile detention centers and is currently working on a methods handbook for those who wish to follow her in this work. Lomasko explains how she got into this line of work and why it is important for juvenile delinquents to have such a link to the outside world.

Drawing by Natalya Mikhaylenko. Click to enlarge the image.

One day, teenagers in the Mozhaysk Juvenile Detention Center asked me what I was doing there and why I was teaching them. They said that I was probably being paid a lot of money for my lessons, and they thought there was something mysterious about it.

At first, I was curious to learn what prison life was like and wanted to do some stylized drawings based on it. Then I became interested in giving lessons to inmates — how could I organize drawing lessons here, in this very specific environment? I developed a direct bond with the teenagers: I knew who they were, knew that they had names and interests, and that they were waiting for me.

Yet, I still never completely turned from an artist into a social worker; an artist is focused on experiments and looking for themes that have been previously unexplored.

When the painting curriculum for juvenile inmates is fully completed, the project will be over. It is important for me to transform my findings into a book, to make them useful for other volunteers who are ready to work in juvenile detention centers.

Life in a juvenile detention center is like groundhog’s day: there is a strict regime that must be followed. Some of the teenagers make attempts at self-reflection, but they are completely isolated from a normal life and are in some way frozen. They do not want to think or analyze, and painting lessons can shake them up a bit, because it is very intense mental work.

If you ask a juvenile inmate to draw whatever he wants, most-likely, it will be prison-related. One of my students, Andrey, was very good at painting what is called “stamps” — detailed drawings in a prison style made on handkerchiefs or simple cloths. He was a respected “prison painter” among the other teenagers.

At first, he disliked my lessons, because my assignments contradicted his usual practice and he was not very successful. Andrey accused me of making everyone paint with no emotional involvement — and so did others. They would ask why I forced all these “forms” and “counter forms” on them.

For them, painting with emotional involvement meant barbed wire around a heart or a rose, a sun behind bars and naïve copies of icons. But then, when the Center for Prison Restructuring published a calendar of paintings made by juveniles and one of them was Andrey’s, he changed his attitude toward our classes.

In general, my students usually complain, saying they do not know what to draw. They have forgotten about everything that was outside the detention center; inside it there is nothing exciting. I explain to them how boring, unpleasant or awful things can be turned into something exciting — about featured drawings, albums made in cities under siege, war or prison camps. After this they usually start taking a more attentive look around.

What prisoners dream about

Usually teachers should not ask teenagers what they were sentenced for. Recently, however, clothing labels were changed to include the article number [of the law] the inmates violated in their crime. There are always students with very different conviction articles. One of my first students, Oleg, was a skinhead who was convicted for a group murder.

The story went this way: a small city, Caucasian mafia, teenage clashes. Oleg was a witness to the murder of his friend by teenagers from the Caucasus. The latter were ever punished. Oleg decided to take revenge, so he created a skinhead group that attacked Caucasian markets. He considered himself a patriot: if the government wants to do nothing, he was going to do it himself, he said.

We created an exhibit of the pictures made by the students, including a picture by Oleg that depicted his crime. The exhibit was hosted by one of Moscow’s leading schools. I listened to what high school students were saying when attending the exhibit, and it turned out that a lot of them supported Oleg’s attitudes.

They were shocked to learn that those in juvenile detention centers were teenagers like them, but a lot of them shared those nationalistic ideas. Of course, school students need to discuss issues like this. But what can we tell them?

The future for inmates

We visit the detention center once a month. Every six months the student composition is changed completely: some of them are released, and others move on to adult prisons. This means that every student in a group can attend no more than six lessons.

I think, among the students I have had over the last three years, there have been at least five people who could have become artists if the lessons continued.

Previously, inmates could stay in juvenile detention centers until they turned 20 (or until 21 if they had no conduct violations). Many managed to get out and not fall into the adult penitentiary system; but now they feel that adult prisons await them and they prepare for them. The juvenile inmates treat the detention center as a temporary stay where learning is not mandatory. Instead, they feel they should master the prison laws and jargon or get the right tattoos.

Indeed, juvenile detention centers lack people from outside — lack that link to society outside the bars. When you go to a different juvenile detention center that previously had no such lessons in place, you see how difficult it is for teenagers to establish contact: they are not ready for the lessons and cannot express their feelings. It is really hard to work in such an environment — as if you are trying to break a wall with your head.

Victoria Lomasko is a Russian artist who draws pictures of people in the arts. Usually her subjects are those who have been involved in high-profile court cases, including Pussy Riot band members and the organizers of the Forbidden Art exhibition. During the political unrest in Russia in 2012, she depicted life in the regions and presented illustrations of the protest activity in her Resistance Chronicles project.

The opinion is abridged and first published in Russian in the Bolshoi Gorod magazine.