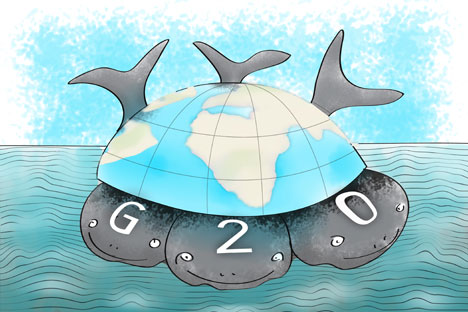 The first meeting of the G20 Finance Ministers and Central Bank Governors under Russia's G20 presidency was held in Moscow in mid-February, as a preparatory step towards the upcoming Summit in St. Petersburg on Sept. 5-6.

A wide range of pressing issues was discussed, including, first of all, “traditional” G20 topics, such as the global economic outlook, implementation of the Framework Agreement for Strong, Sustainable and Balanced Growth, international financial architecture and regulation reform.

Secondly, two priorities proposed by Russia – investment financing and government borrowing and public debt management. Issues of currency markets volatility, as well as national tax base erosion and profit shifting by multinationals were also mentioned in the Communiqué.

It is evident that the continued global economic uncertainty calls for our responsible and consistent joint efforts. The time when crises were local and isolated is in the past. Financial problems in a number of the world’s big economies still affect the global economic situation and it is not longer possible for any country to stay outside the inter-connected economic processes with spill-over consequences and face these challenges alone.

Among the main tasks for the G20 and Russia’s presidency therefore are initiatives to encourage global governance institutions to have closer coordination of economic policy, to create effective instruments for eliminating the global imbalances that have built up in order to stimulate growth in all parts of the world.

When the crisis struck it was the G20 through which countries agreed on coordinated economic support measures, it was the G20 that introduced tough restrictions on trade protectionism and provided a new impetus to trade talks, drafted new financial regulation rules, and began talks on reforming the international financial organisations.

And it was the G20 that brought additional efforts to facilitate sustainable development and promote green growth, which focuses, above all, on high environmental standards and quality of life.

The challenge is whether the G20 will be just as effective in resolving long-term development tasks, and whether we can continue a policy that will actually pull the global economy out of stagnation and uncertainty and put it on a steady and sustainable growth track.

In order to have focused and result-oriented discussions Russia proposed to concentrate the G20 agenda on its primary goals of achieving balanced growth and creating jobs through, among other things, encouraging investment, increasing transparency and making regulation more effective.

One of the specific proposals, introduced by Russia this year is a format of joint Finance and Labour Ministers’ meetings which we hope will contribute to the improved conditions of labour markets worldwide.

Overall, the issues on the agenda we have proposed are closely interlinked and complement each other. For example, the investment issue is closely linked to another of our financial priorities – managing sovereign debt. The situation in this area is complicated today, especially in the developed economies, making investors uneasy and stirring up the vicious circle of debt and economic crises.

It is our firm belief that only by following a clear and transparent policy in managing fiscal deficits and sovereign debt in medium term, countries can win back the confidence of investors. Investment, transparency, and effective regulation are thus issues that unite all items of our financial agenda.

Russia is deeply committed to continuing the work that has already been started in this high-level format. We will strive to implement the agreements on creating a fairer and more risk-resistant financial system. The accountability process would allow us to review the implementation of the earlier G20 commitments and a fresh look at where we need to redouble our efforts.

By the time the G20 leaders arrive in St. Petersburg in September, a number of important financial track issues have to be worked through and reported at the ministerial meetings in April and July, such as national medium-term fiscal strategies, long-term investment financing, IMF reform review, “too big to fail” problem of financial institutions, derivatives markets reform, shadow banking, credit rating agencies, financial indices, the OECD's plans on tax base erosion and profit shifting, financial inclusion and others.

In this respect we believe that the decisions on reforming IMF voting quota distribution and the quota formula are achievable and these changes should fully reflect the transformed balance of power in the global economy today, including the increased role and weight of emerging markets, developing economies generally, and protecting the voice and representation of the IMF’s poorest members.

A decision to set a timeframe was reached at the meeting in Moscow and it was agreed that the integrated approach to the formula and the quota distribution should be well developed by the Summit in St. Petersburg, so that the leaders could set the course towards establishing a new formula and quotas agreement to be finalized by the end of the year.

It is also worth mentioning that the Moscow meeting of Finance Ministers and Central Bank Governors provided a new impetus to the joint efforts aimed at increasing tax transparency, addressing issues of tax base erosion and profit shifting policies by multinational companies.

Russia pays special attention to these international challenges as they fully correspond to our own domestic priorities, including the development of national financial markets. We welcome the UK’s active role in pushing for the OECD-led initiative that demonstrates the emerging synergy of our countries’ respective presidencies in the G8 and G20 this year.

It was repeatedly said that 2013 will be a make-or-break year, the year that sets a trend. If we are not able to ensure that the nascent stabilization and positive trends are here to stay, or if we fail to pursue policy coordination and stay on a common positive note, be it currency volatility or other issues, the global economy faces the risk of sliding back into recession.

The G20 process, which allows decision makers of the world’s largest economies to agree on coordinated policies and create an even regulatory field, should not be underestimated.

However, the ultimate beneficiaries of the decisions taken through this unique format must be the common people in our countries, the world population at large. The G20 participants will have to bear this in mind when delivering later in the year on the promises made.