Russian and British Eurosceptics can unite 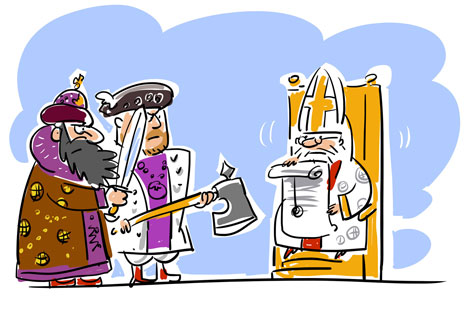 Just about everyone is scolding Britain for being dismissive of the European Union – with the notable exception of Russia.

Strange as it may seem, both Russia and Great Britain, without consulting each other, have adopted very similar policies towards the EU. These boil down to: “Yes to economic co-operation; no to political union and surrender of sovereignty.”

While British Prime Minister David Cameron is fighting to curb the EU’s budget appetites, Moscow’s scepticism can be seen in the long-running stalemate over the new Partnership and Co-operation Agreement between Russia and the EU (the old one formally expired back in 2007).

President Vladimir Putin from time to time enlivens the scene by his critique of the EU’s economic policy on Russia, with its emphasis on “reduction of the EU’s energy dependence on Moscow”. Translating this from the EU’s politically correct Newspeak, it means trying to replace Russian energy exports to the EU with exports from other sources, including the dictatorships in Turkmenistan and Iran.

Of course, there is a big difference between the two countries’ images, which, in the eyes of a layman, might make a travesty of the very idea of comparing Britain’s and Russia’s visions of the EU. Britain is very much Europe’s “good boy”, so its opposition to the EU’s influence, based on Britain’s traditional independence and values, is respected in Brussels.

Russia, on the other hand, is Europe’s “bad boy”, and its criticism of the EU is seen as stemming from its “Communist past”.

Some of the EU’s think  tanks view Russia’s European projects, including the construction of undersea pipelines for pumping natural gas to Europe, with great suspicion, seeing in them one more sign of Moscow’s unapologetic imperial ambitions.

But, pragmatically, these EU policies make no sense. Militarily, Russia ceased being a threat to the EU two decades ago. Russia’s elite is very well disposed towards the EU, making its banks the primary holders of its savings and unilaterally introducing many European norms into Russian law.

The reason for this sad state of affairs is not very different from the reason for EU-British friction. The EU is increasingly an ideologically intransigent body, advocating rather questionable modern values (such as same-sex marriages, which not all Russians or Brits find easy to stomach) as obligatory elements of “European identity”.

In a way, it’s reminiscent of the Middle Ages, when Orthodox Russia’s relations with individual European states could be better or worse, depending on realpolitik, but its relations with the Vatican were invariably frozen and full of ideological distrust. Today, the EU obviously aims to be the new Holy Roman Empire, taking on the role of moral arbiter and central authority. This is something that both Russia and Britain have always found hard to accept, since the times of Henry VIII and Ivan the Terrible.

So how would Russia react to Britain leaving the EU altogether? Interestingly, when England’s separation from Catholicism became total under Queen Elizabeth I, Ivan the Terrible immediately developed a liking for her, and even proposed marriage. He was one of the very few people in Russia at the time who knew something about England and its relations with the rest of Europe.

Similarly, the vast majority of Russians today take little or no interest in their country’s relations with the EU (let alone Britain’s).

But the Russian elite is watching, and taking notice.

Dmitry Babich is a political analyst for the Voice of Russia radio station.