Behind the fear of meteorites 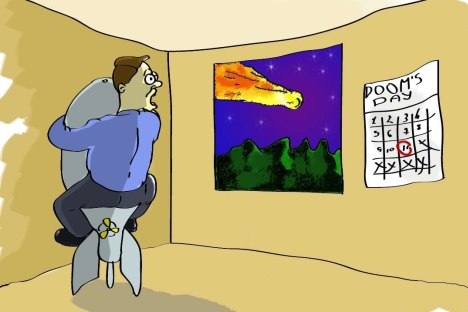 Few people know that the Chelyabinsk meteorite exploded exactly 100 years after another unique astronomical event, with a difference in six days: the Great Procession of Meteors in 1913 raced a dozen meteorites by the sky of the northern hemisphere.

The Chelyabinsk meteorite not only caused millions in damage and injured over a thousand of people, but it also awoke a new phobia in people’s minds. The Ogoniok magazine correspondents investigate panics of historical epochs, trends in mass hysteria, and the role of technology and mass media in stirring our fears.

n 1913, Russian journalists asked writers and artists of St. Petersburg to talk about what they were most afraid of, later publishing a special “terrifying” issue on their findings. A real encyclopedia of phobias from the beginning of the 20th century was thus released: the artists painted demons and devils, and the writers wrote stories about the evil ghosts.

Remarkably, the magazine did not mention a single word about the coming revolution and war, or a worldwide catastrophe of any sort. Hence, at the beginning of the last century, science had inspired the people to peace of mind, but all kinds of mysticism still conjured up fear of the incomprehensible.

Today, the situation seems to have flipped completely: vampires and other creatures have become teenagers’ idols, while advances in science have come to instill genuine horror in humanity. It turns out that, with the expansion of our knowledge about the world, the list of threats has expanded.

An average person with an ordinary education is simply unable to formulate many of these threats; still, the average person recognizes when something is frightening. Just remember the mass hysteria around the launch of the Large Hadron Collider, or the expectations of a global climate catastrophe to accompany the end of the world as calculated by the Mayans.

Even nanotechnology, which was promoted five years ago by the current Russian prime minister, seemed a mysterious source of evil that destroys living organisms at the molecular level.

Technological progress has also played its role. If anything like this had happened in the Soviet era, no one would have paid attention to the explosion in the atmosphere. In fact, this is exactly what happened in July 1949, when another meteorite exploded in the sky over Chelyabinsk: the newspapers printed a small article, and residents skimmed over it and immediately forgot about it.

Or, for example, does anyone remember the bolide explosion 15 years ago in the skies over Siberia? The power of the explosion was equal to 20 of the atomic bombs that were dropped on Nagasaki.

No more meteor shower in Russia?

Meanwhile, there is no doubt that the recent Chelyabinsk explosion will be remembered for a long time, thanks to video recorders that shot the blast in all possible ways. The recordings hit the Internet, there were jokes and collages made about the meteorite, and then, one by one, "conspiracy theories" about the explosion were born.

Soon, those in government corridors started to talk about creating a new anti-meteorite defense.

Now, frightened people do not accept the arguments of scientists, who say that, in principle, we cannot control 90 percent of the asteroids and comets passing close by us. Here are some figures: each month in the Earth's atmosphere, medium-sized bolides explode with energies up to 300 tons of TNT.

Every 10 years, meteorites slam the planet's atmosphere with the energy of 50 kilotons of TNT. However, objects like an asteroid or the Tunguska meteorite visit us once in a millennium.

According to Hakob Nazaretyan, the chief researcher of the Oriental Studies Institute and an expert on psychology of the masses, the formation of a "panic crowd" is scarcely dependent on nationality and culture; mainly it has to do with fears of an historical epoch.

In the Middle Ages, for example, mass panic was caused by witches. Today, there are other fears — the fear of radioactive contamination, airplane crashes, and falling asteroids. The sources of rumors change with time: if previously they were distributed by taxi drivers, merchants, or grandmothers, now it is the mass media that contributes to drawing people into mass panic and hostility.

Looking at all the information noise around the meteorite, we should ask: are we not deceived as our ancestors were 100 years ago? Maybe we should be afraid not of rocks in the sky, but of something more real that is already at our doorstep.

The opinion is first published in Russian in the Ogoniok magazine.

Kirill Zhurenkov, Sergey Melnikov, Vladimir Tikhomirov are the columnists for the Ogoniok magazine.

Turn of the century

On the eve of the millennium, computer users around the world were afraid of the so-called Y2K bug. Many were concerned that the data in computers would just be reset when the year switched to 2000 — this could have been critical, for example, for financial programs. In some countries, large sums of money were put into finding the Y2K solution, even though experts criticized the idea and argued that the issue was not worth inflating.

A large-scale outbreak of the disease occurred in 2009 and led the World Health Organization (WHO) to raise the pandemic threat to the maximum — 6 points. This was the first time the threat level had been that high in 40 years. The whole world was in a panic. Later, when fears subsided, WHO was accused of fanning unnecessary fears, and entire batches of purchased vaccine remained unclaimed.