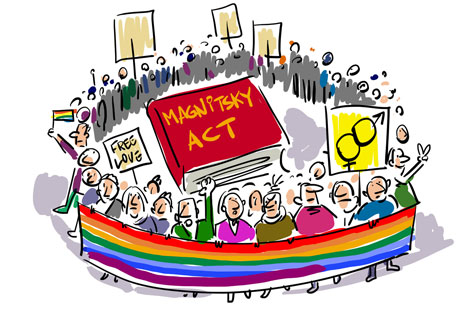 A holocaust is around the corner!”, “Eichmann would have been proud!”, and “Who is next?” scream Russia’s liberal bloggers. State TV, as well as pro-Kremlin and numerous Orthodox websites, send quite a different message: “They are after our children!”, “Gays are Russia’s shame!” and “Nip this danger in the bud!”

The bill “for the prevention of homosexual propaganda to minors” sailed through its first reading in Russia’s parliament, but it also exposed tensions that are unparalleled even by the standards of contemporary Russia (where the government is hardly shy about issuing bans and curtailing civil liberties).

The bill has been branded “homophobic” by numerous high-placed Western officials and influential organisations, including the EU’s foreign affairs chief Baroness Ashton, German Foreign Minister Guido Westerwelle and Human Rights Watch, among others. It would impose fines on those individuals or organisations that engage in homosexual propaganda among minors.

The State Duma is pressing on with its adoption-related initiatives, while for many in Russia’s weakened opposition, gay rights have become the latest rallying cry. On both sides of the political divide, grotesque exaggeration thrives as camouflage for unpleasant truths.

The Kremlin has ordered the pliant Duma to adopt the law, which is a world away from the Nazi regime’s persecution of homosexuals. As a piece of legislation, it pursues two aims, the first being to bolster its standing in provincial Russia, Vladimir Putin’s main power base. There, in Perm or Khabarovsk, relaxed metropolitan attitudes to homosexuality are rarely if ever voiced.

Its other aim is to distract public opinion away from the one theme that is of real concern to Russia’s ruling elite: the US “Magnitsky Act” and the Kremlin’s response to it – a blanket ban on American citizens adopting Russian children.

The bill is formulated in such deliberately vague and general terms that it virtually gives enforcement officials carte blanche to harass gay activists, or anyone they choose, for a range of activities so broad that it even encompasses reading publicly poems by the Russian poet Marina Tsvetaeva (who was bisexual) near a school.

On the bright side, few people here believe that the law will actually be implemented as it would bring nothing but embarrassment.

On the opposition side, the gay rights lobby seized the opportunity to incorporate its demands into the wider opposition narrative of the struggle with the Kremlin.

Some Russian opposition leaders say that advocating gay rights, although a noble endeavour in itself, does not help the Kremlin’s opponents gain ground in the provinces, where the attitude to the lesbian, gay, bisexual and transgender movement is frosty to say the least. But they are running big risks.

The line that gay rights activists are giving to the public is very straightforward: anyone who is against gay rights Netherlands-style is a homophobic Kremlin stooge. A radical left-libertarian attitude to societal values is recast as a mainstream slogan.

In these circumstances one thing is very visible: Russia lacks any meaningful movement or party that is conservative in the Western sense of the word. That essentially means pro-democracy, pro-market, but also pro-family values and traditional attitudes (such as recognising the importance of faith).

Those claiming to be Russian conservatives often turn out to be individuals with a tentative grasp on reality, who demand the restoration of the Soviet Union under absolute monarchy, who despise democracy as “a devilish import from America” and advocate prison sentences for gays.

While many Russians oppose these patently silly laws that discriminate arbitrarily against citizens, not many are quite ready to see the radical redefinition of their values on which the EU seems to insist.

Unfortunately there is no voice of reason between unfettered liberal modernisers and those who consider reform and democracy to be synonymous with destroying tradition. Russia badly lacks an equivalent of the US Republican Party, and it is by no means inevitable that one will develop.

Konstantin von Eggert is a commentator for Kommersant-FM radio.