Where to invest in the Russian economy in 2013 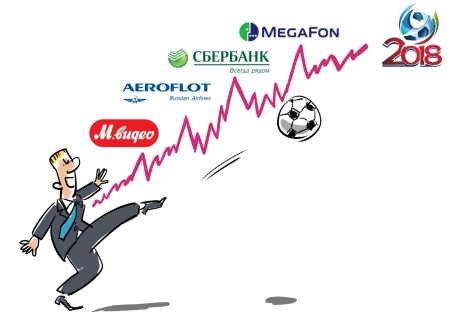 Which sectors of the Russian economy are growing the fastest this year? Analyst Mark Rubinstein tips investors on where to find the most bang for their buck in the Russian market this year.

Which sectors of the Russian economy will be the most beneficial ones for investors over the next six months and in the longer term? I suppose these are the sectors contributing to the growth of domestic consumption and those focusing on infrastructure development.

The former will grow faster than normal because of extensive bank lending, higher incomes, slower inflation and a stronger ruble. The latter will be showing growth because the country needs to overcome a major obstacle (along with establishment of the rule of law, economic and political liberalization and reduction in corruption) to more rapid economic expansion — namely the outdated and underdeveloped infrastructure.

Consumer lending in Russia went up 40 percent in 2012, to reach the pre-crisis record high of 2007. Yet the debt burden on Russian households remains insignificant, at about $1,800 per capita, compared to around $4,000 in Eastern Europe and more than $30,000 in developed economies.

The penetration of mortgage lending — a key banking product — is still very low even though the economy is growing at the pre-crisis pace. The mortgage-to-GDP ratio in Russia is about 3 percent, compared to 5 percent in Turkey and Brazil and 21 percent in Poland and the Czech Republic.

If the Russian economy manages to grow overall at a rate of 3–3.8 percent this year, the sectors focusing on domestic consumption will gain from 10 percent to 20 percent.

The sectors with securities having the highest potential yield in the next six to 12 months are finance, home construction, transport, automotive, media services and telecoms. My advice is to invest in Sberbank*, VTB, Vozrozhdenie Bank, LSR Group [these securities are present in the author’s portfolio], Avtovaz, Sollers, Severstal, Aeroflot, M.Video, Megafon and Yandex.

When it comes to the infrastructure, we should bear in mind that the largely outdated or underdeveloped infrastructure not only affects the potential economic growth, but also prevents the country from meeting its international commitments, including holding the 2018 FIFA World Cup.

We should not turn a blind eye to this event: not a single arena of the 12 venues is yet complete and no highways and hotels in the 11 host cities meet the official requirements. Organization of the 2018 World Cup will cost Russia an estimated 1.3 trillion rubles ($42.6 billion).

The federal program for development of the transport infrastructure for 2010–2015 envisions investment in the railway infrastructure alone at 320 billion rubles ($10.5 billion) annually.

In the energy sector — the one probably facing the most infrastructure challenges — 62 percent of the facilities in the generating segment alone are over 30 years old.

This segment requires almost 3 trillion rubles ($98.4 billion) in investment during the next six years: imagine how much additional installed capacity the new football arenas, airports, railway stations and hotels will require. International giants, such as General Electric, Siemens, Caterpillar, and Komatsu, will probably account for a substantial share of the investments in this sector.

My advice on how to participate best in this growth is via shares in Mostotrest, NLKM, MMK, LSR Group, E.ON Russia and Globaltrans.

In brief, investment analysis consists of three basic things: analysis of opportunities, risks, and of the way the first two factors correlate with the current cost of investment. Analysis of the above companies indicates a significant potential for growth in the next 6–12 months.

Mark Rubinstein is the director of the analysis department at IFC Metropol. The opinion is first published in Russian in Vedomosti newspaper.