Russian-American relations set for a pause 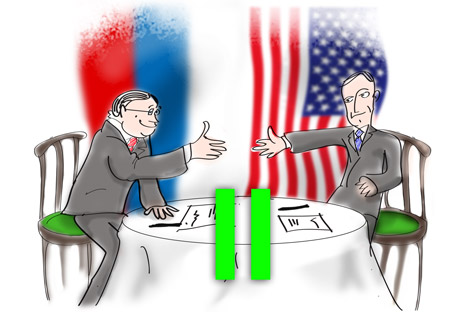 Four years after a “reset” in Russian-American relations, the two countries seem poised to postpone efforts to clarify their positions indefinitely. Expert Fyodor Lukyanov explains why the agenda of the recent meeting between U.S. Secretary of State Kerry and Russian Foreign Minister Lavrov confirms this expectation.

Russian-American relations set for a pause. Drawing by Niyaz Karim. Click to enlarge the image.

Clinton brought a yellow box with a red button to the meeting; the red button read “reset.” The idea was that the two diplomats would push the button together, as a symbolic gesture — except the Russian translation on the box read “peregruzka” (which means “overload”) rather than “perezagruzka” (which means “reset”). Nonetheless, this mistake did not cloud the mood then.

Russian-American relations have since completed a full cycle: there was a thawing of tensions, followed by active talks and an agreement; then attempts to move further stalled, which led to a deterioration of the relationship and new conflict. The Magnitsky Act and Russia’s retaliation — including the ban on U.S. nationals adopting Russian orphans — caused a new wave of mutual rejection.

The two met against a backdrop of negative rhetoric, although they showed an obvious desire to defuse tensions. This was even more apparent, since, this time, the negative sentiment seemed to be emanating exclusively from the Russian administration, which seemed to have decided that it was time for a break.

Will the 2009–2012 scenario repeat itself? On the one hand, the pattern of relations between the two countries has not changed since the 1970s — periods of relative calm alternated with spells of cooling relations. There is little hope that Obama’s second administration and Putin’s third Cabinet will be able to break away from this spiral, because the two countries have so far failed to build a solid, unifying foundation.

The traditional model may be adjusted, however, as the fundamentals of bilateral relations are being eroded.

Soviet-American nuclear parity — the foundation of strategic stability — formed the backbone of the system of international relations during the Cold War. When the Cold War was over, the significance of this nuclear balance decreased, but the phenomenon remained. This gave Russia and U.S. exclusive status, even though nuclear balance had lost its place as the center of world politics.

During the Bush presidency, America decided that the issue was not relevant any longer. It was time to put an end to the incessant negotiations and allow each country to do whatever it wanted to its nuclear stockpiles. It was at this moment that relations hit a 25-year low, revived later by a new round of talks over a Strategic Nuclear Forces treaty. This made up the core of the “reset” campaign.

Now it is time for Moscow to turn away from nuclear rhetoric. The reasons for this are clear: further reductions in the nuclear arsenal pose the question of alternative ways to ensure national security. American missile-defense-system projects, coupled with China’s growing potential and the largely inadequate capability of Russia’s conventional forces, require the country to possess sufficient deterrence potential.

What will be left of the Russian-American agenda once this systemic component has been withdrawn? The meeting between Lavrov and Kerry outlined a possible answer.

According to official spokespeople, three issues topped the agenda — Syria (most of all), adoptions and the missile defense system.

Syria is a tragic case, but it is just one of many regional conflicts involving the world’s leading nations. There have been many conflicts of this kind, and there will be at least as many in the future. Whatever the outcomes, they will not produce a systemic impact on Russian-American relations.

The issue of adoptions is even more localized. The conflict around Russian orphans says a lot about the ethical makeup of the two countries. The very fact that such a narrow topic has been brought to a high political level at all is an abnormality that builds on some ulterior motive — a symptom of a disease rather than its cause.

Last but not least, there is the missile defense system. This is not an area for systemic engagement, although it is relevant to strategic issues. Discussions and attempts to find a solution reached their peak long ago, and it is more or less clear how the parties will behave.

The U.S. will likely adjust its ballistic missile defense plans toward a more frugal and better-targeted system — but the concept will remain. Russia will build on its nuclear potential and cite Washington’s reluctance to give up on its missile defense campaign, regardless of whatever reductions are introduced to the original model.

Afghanistan and Iran are two more issues to address. The former seems to have faded away on its own: the U.S. will not depend on Russia for military transit any longer after 2014. Iran remains a relevant issue. However, it is not a bilateral challenge, but rather an entanglement of problems, especially amid the boiling Middle East.

This suggests a pause in Russian-American relations, instead of a new cycle or turn of the spiral. This pause will be filled with formal diplomatic efforts in relation to Syria and Iran — that is, “third-party issues” that are not related to the bilateral framework. Sergei Lavrov and John Kerry are perfectly suitable for the job.

As for any clarifications of the bilateral framework, they have been indefinitely postponed.

Fyodor Lukyanov is chairman of the Presidium of the Council on Foreign and Defense Policy.