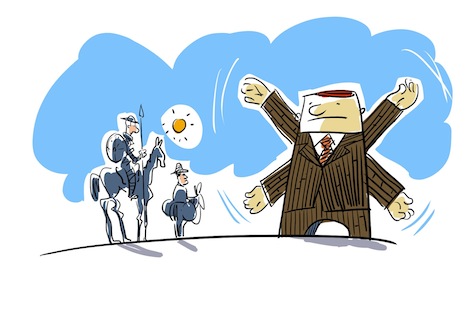 Everyone is tempted to speak their minds about what the “new old president” has or has not been able to accomplish since the Mar. 4 election; this was a watershed moment of sorts that was supposed to clarify the configuration of power in Russia.

Previously, we had both a formal president and an informal leader of the nation, but the election was intended to make Vladimir Putin the formal and unconditional leader of the country, all at once.

First of all, following the presidential election, Putin’s inauguration and the formation of a new government, politicians and analysts were keen to see what the configuration of power would look like. Some analysts expected the tandem to survive the inauguration and the country’s governing model to remain in place for some time to come.

It became clear very quickly, though, that there were no grounds whatsoever for the tandem to persist. While in office as president, Medvedev needed a prop for his power in the form of Putin’s authority, his political experience and his presence as a guarantor of consensus among the elites and between society and the government.

The newly inaugurated President Putin does not need an equal partner-in-tandem, because, even after spending four years as president, Medvedev has failed to gain any political clout of his own.

The second and very important thing worth noting is that an unprecedented fight against corruption started in Russia immediately after Vladimir Putin returned to the Kremlin. It looks as though the powers that be are bent on dragging government officials and business people connected to them through a purging process…

The Russian State Duma is on the verge of passing a bill that bans government officials from owning stocks or accounts in foreign banks and requires them to declare foreign real estate. Many commentators perceive this law as Putin’s attempt to bring the Russian elite under the state’s control. I believe the official steps in this direction are an integral part of a broader fight against corruption, which will help make the Russian government more transparent…

This has spawned a lot of speculation in political and expert circles: if Putin were to abolish the untouchable status of top officials, then high-profile denunciations of ranking executives (including government ministers or deputy prime ministers involved in graft) might follow; some could possibly even go to jail. Would this not result in a serious split within the elite and a weakening of the incumbent president’s political base?

Consolidated elites are traditionally viewed as a substantial basis for government power in transitional societies such as Russia’s. In Putin’s case, however, we know that, since the very beginning of his presidency, he has never relied on economic elites or worse — corrupt officials.

Putin has experience waging a very serious struggle against such a “power basis.” Oligarchs and regional leaders were thought to form this kind of base during the Yeltsin era.

As he engaged in a simultaneous and very successful battle against both of these powerful forces in the 2000s, Putin relied on what were still very weak government institutions  at the time — the law enforcement system, and, of course, massive public support. In today’s circumstances, government institutions are much more effective and powerful for serving as Putin’s base in his new battle.

This is why I believe the consistent struggle of Putin and his team to purge the Russian government of its all-pervasive corruption could be more effective and successful in today’s circumstances; it is unlikely to create any real threats to the incumbent authorities.

The president’s approval ratings have declined somewhat in the year since he was re-elected. This can be explained not only by the fact that this is what normally happens in all countries in the first year following elections, but also by the huge expectations Russian society has for its leader in terms of improving both the moral and economic situation in the country. As aforementioned, Putin’s power and the basis for his authority are rooted in massive public support.

To prevent further declines in the president’s approval rating, Russian society needs to see specific results of the government’s activity: successes in the economy, in fighting corruption, in cleansing the government, in improving the moral and political atmosphere in the country, and in society as a whole.

Since it would be more difficult to achieve quick and tangible success in the economic sphere under the current circumstances and amid a generally unfavorable global economic situation, the government could achieve tangible results in other areas such as the fight against corruption, which, in turn, would create more favorable conditions for economic growth.

Andranik Migranyan is a political scientist who writes as a contributor for Izvestia newspaper. The opinion is first published in Russian in Izvestia.