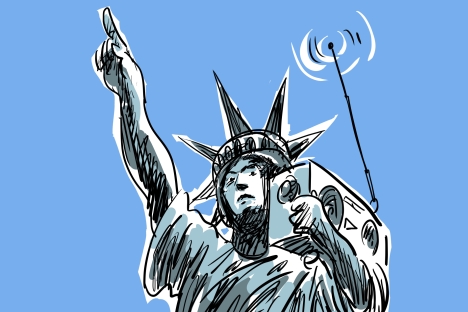 As Radio Liberty celebrates 60 years on the air, a group of its former correspondents are fighting for their jobs - and, they believe, the life of the station.

In my mind, Radio Liberty is like the hero of a Hollywood action franchise: By any reasonable laws of the universe, this hero should have died long ago, but by the laws of  his genre, he not only continues to live, but also defeats all his enemies.

According to any reasonable interpretation of the laws of the universe, Radio Liberty should never have survived. It was never allowed on an FM frequency in Russia and over time lost nearly all of its regional partners under pressure from local authorities. Finally, now, a Russian law has deprived Radio Liberty of its AM medium wave frequency, on which it was able to broadcast in Moscow and the Moscow Region.

But even this latest blow did not finish the station off. Its broadcasts were, after all, still available on shortwave and the Internet, where a substantial audience continued to download programs.

It seemed that even Kremlin could not remove these last two opportunities for Radio Liberty to communicate with its audience. But then something unbelievable happened.

Last September, the president and vice-president of Radio Liberty selected a new director to lead the Russian Service. In this process, they dismissed a large group of journalists, among whom were some of the most popular hosts both on air and online. A few other journalists left voluntarily in a sign of solidarity with their colleagues and a protest against the dismissals.

The new director replaced these journalists, but the popularity of the station went into a precipitous decline. The website fell in the rankings and many of the daily broadcasts were repeats of previously aired programs. Some in the Russian media establishment again began to write obituaries for the station.

But Hollywood is Hollywood and Radio Liberty is once again rising from the dead. The journalists who were fired last fall began a campaign of support among Russian politicians human rights activists who have friends in the United States. People such as Lyudmila Alexeeva, Sergei Kovalev, Valery Borshchev, Mikhail Gorbachev and Grigory Yavlinsky began to write to the Broadcasting Board of Governors - the American institution that selects the leadership of Radio Liberty.

The group of fired employees launched a Facebook page called “Radio Liberty in Exile" and Andrei Korolev, the former Radio Liberty correspondent in Murmansk took it upon himself to design and maintain a website called New Liberty.

Meanwhile, the Radio Liberty exiles were aided by Ted Lipien, who maintains a website called BBG Watch that follows the activities of the Broadcasting Board of Governors. Lipien publishes in English materials on the Radio Liberty in Russia and offers them to the American media. Former Radio Liberty managers, John O’Sullivan and Mario Corti, also publish articles in the Western press.

Foreign correspondents accredited in Moscow regularly interview the exiled journalists and all the details of the conflict have been tracked for several months by the most popular newspapers, online publications and news agencies in the Russian Federation.

In late December, the president of Radio Liberty resigned and was replaced by Kevin Klose, who also led the station in the mid-1990s. The group of dismissed journalists wrote a letter to him asking him to act on the situation. It was signed by 20 current employees of the Russian service and 15 of Radio Liberty’s correspondents abroad. In late February, Klose came to Moscow and met with human rights activists and the dismissed journalists.

On March 1, Radio Liberty celebrated the 60th anniversary of its first broadcast.

It remains to be seen if the dismissed journalists will be allowed to return to the station, but the story proves that Radio Liberty can manage to survive no matter if the threats it faces come from internal or external forces.  At least, the credits have yet to roll on this movie.

Elena Rykovtseva was a journalist at Radio Liberty from 2001-2012.