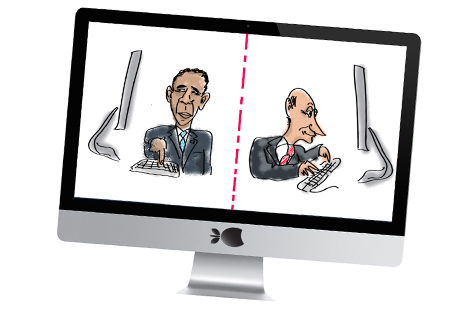 Cyberspace may become an arena of confrontation — particularly, between Russia and the United States — unless confidence measures are taken soon.

The future of the international information space has been a regular topic of discussion at all influential platforms of late — from the UN, G8 and G20, to OSCE, BRICS and the annual Munich Security Conference. The reasons for increased attention to cyberspace problems may vary, but they all have one common denominator: The countries that are most advanced in the field have turned out to be the most vulnerable.

While Russia is particularly concerned about the use of new technologies to wage information wars and destabilize regimes, the U.S. is worried about their potential use for criminal, terrorist and military purposes.

In 2010, the U.S. became the first country to officially declare cyberspace as a potential battlefield alongside land, sea and air. In 2011, it was the first to develop a national cyberspace strategy that would allow Washington to react to computer sabotage using all available means — including nuclear weapons.

Earlier, the U.S. set up its Cyber Command — a paramilitary structure to repel virtual attacks. In late 2011, Congress approved and appropriated money for the development of offensive cyber technologies. Last autumn it was revealed that the U.S. Air Force Command was planning to buy a range of toxic programs to disrupt or destroy the computer networks and control centers of potential enemies.

Moscow takes a guarded view of Washington’s activities, believing them to be one of the main causes of the cyber race that has swept the world. The armed forces of a number of countries (including China, India, Israel, Great Britain, Iran and Estonia) recently set up cyber units.

Russia’s defensive and offensive cyber potential is still far inferior to that of the U.S., but Moscow has recently been developing it more actively.

In late December 2011, the Ministry of Defense published a document titled “Conceptual Views on the Activities of the Russian Armed Forces in the Information Space,” naming the information space as a potential arena of hostilities.

In March 2012, the Russian authorities formally announced plans to create a cyber command similar to the one that exists in the United States. In January of that year, Vladimir Putin ordered the Federal Security Service (FSB) to develop a national system to forecast and prevent cyberattacks, giving the agency new powers to fight cybercrime.

The Russian Security Council and the Ministry of Foreign Affairs pay great attention to international information security. In March 2012, the Ministry of Foreign Affairs created the position of roving ambassador, to coordinate the political use of information and communication technologies. One of the agency’s key tasks will be to promote initiatives for adopting the U.N. international code of conduct on the Internet.

Russia is also advocating the principle of non-interference in the information space.

The U.S. and its NATO allies, however, have rejected the Russian initiatives, regarding them as the desire of a weaker side to limit the potential of a stronger side.

Discussions of this very issue divided states, and countries fell into two camps, depending on what views they held about the future of the World Wide Web. The U.S. and its NATO allies found themselves on one side of the divide, and Russia, China, Kazakhstan, Belarus, Armenia, Tajikistan, Iran and a few other countries were on the other.

Some experts hastened to dub the virtual conflict between East and West “The Cold War 2.0.”

It is unlikely that the gap can be bridged and that a comprehensive international agreement will be prepared any time soon. Moscow and Washington harbor no illusions about persuading the other to change its stance. Instead, they are trying to avoid a disaster.

It is very hard — and, for the most part, unrealistic — to trace the source of an attack. Since Washington and Moscow reserve the right to react to cyber incidents as if they were traditional acts of aggression, the situation could very well be catastrophic. To prevent such a catastrophe, the parties are trying to agree on confidence measures, such as exchanging information and setting up hot lines in the event of massive cyberattacks.

Considering the current deterioration of Russian-American relations, international information security remains just about the only area where a breakthrough is possible. However, barring an early agreement on confidence measures, cyberspace may cease to be a unifying element and a potential area of practical cooperation between Russia and the U.S. and become an arena of confrontation.