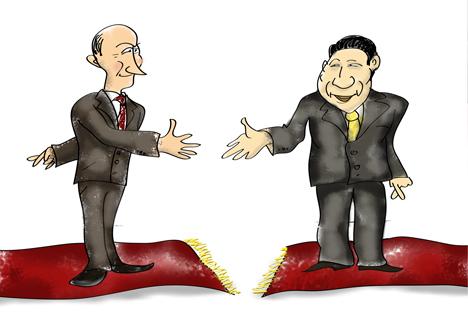 Newly elected General Secretary Xi Jinping will make Russia the destination of his first official foreign visit later this March. This decision not only signifies Moscow’s strategic importance to Beijing, but it also highlights unsolved issues — particularly on the economic side — in bilateral relations between the two countries.

General Secretary Xi Jinping of the Chinese Communist Party is scheduled to pay an official visit to Moscow on Mar. 22. Russia will be the first foreign country the Chinese leader will have visited since his election at the annual session of the National People's Congress.

Rosneft may supply China with additional 9 million tonnes of oil

Given rising tensions in relations with the United States and many of its neighbors, Beijing is looking to bolster friendly relations with Moscow. The economic foundation of the friendship between the two countries is in need of some bolstering, too.

Xi Jinping announced that his first foreign visit as China's leader would be to Russia at a meeting with a delegation from Russia's ruling party (United Russia) in December 2012.

Clearly, the choice of the Chinese leader's first foreign destination has important symbolic significance. However, it should be understood that Xi Jinping did not really have many other options, since he must represent China at the BRICS summit in South Africa.

An alternative to Russia would have been a visit to an African country, but that would have meant a difficult choice in deciding which partner on that continent to visit first. A visit to Europe, the United States or one of the neighboring countries was not on the agenda, so Russia was the safest choice for the new Chinese leader.

That being said, the timing for the visit could not have been better. Judging by American officials' latest pronouncements, the country's turn toward Asia will be implemented without delay. Therefore, China is in dire need of reliable allies — or at least problem-free neighbors.

Yet, at the moment, China is surrounded by "problem" countries on all sides: with some, China is engaged in territorial disputes (India, Japan, Vietnam, Philippines); with others, it has growing trade but somewhat guarded political contacts (South Korea, Mongolia, Kyrgyzstan, Tajikistan, and Kazakhstan); some countries simply lack stability (Pakistan, North Korea).

Thus, the only country that could play the role of an ally to China is Russia. However, there are still many problems that need resolving here, too.

In recent years, Moscow and Beijing have been actively stepping up their political cooperation: They have created the Shanghai Cooperation Organization; they have been voting in unison at the UN, counterbalancing the three other permanent members of the Security Council; they have been opposing U.S. missile defense plans.

However, when it comes to trade, relations between the world's second and sixth largest economies (in terms of nominal GDP) are far from fully realizing the potential they have.

According to China's General Administration of Customs, in 2012, trade between Russia and China grew by 11.2 percent to reach $88.16 billion.

In order to hit the set targets, progress needs to be made in several areas at the same time.

Firstly, trade clearly cannot reach $200 billion without the signing of a contract for China to buy Russian gas. A memorandum to that effect was signed between Gazprom and CNPC back in 2006.

Two pipelines with a capacity of 68 billion cubic meters (bcm), or 2.4 trillion cubic feet (tcf), were supposed to have been launched last year. However, due to price disagreements, this project remains only on paper for the time being.

In the meantime, the year 2013 is opening new opportunities. Gas prices in Europe are falling, while prices for the liquefied natural gas (LNG) that China imports are steadily on the rise.

Very soon the prices will even out, and sales to Europe and China will become equally profitable for Gazprom. For China, it will make no difference from who it buys its energy resources, except for considerations of the strategic reliability of pipelines and the vulnerability of deliveries by sea.

Secondly, the two countries need to significantly increase their oil trade. It appears that the relevant agreements in this area will become the focus of Xi Jinping's visit.

The president of Russia's major state oil company Rosneft Igor Sechin is ready to give CNPC, CNOOC and Sinopec access to offshore oil projects on Russian territory, as well as increase oil supplies to China via Kazakhstan.

This might dispel the uneasy feeling still remaining after the price dispute between Rosneft, Transneft and CNPC over the Skovorodino-Daqing pipeline. The situation was resolved only in early 2012, at the cost of $3 billion in losses for the Russian participants.

Thirdly, Moscow and Beijing need to revise the large-scale program of economic cooperation between regions of the Russian Far East and Northeast China. A proposal to this effect was signed back in 2009, but it has so far largely remained on paper.

The Russian leadership should also decide whether or not to allow Chinese investors into the Russian Far East and Siberia; if yes, the rules of the game should be defined.

Lastly, the two countries must step up their investment activity. In 2012, China was the fourth largest foreign investor in Russia (in terms of accumulated investment, with $27.8 billion), after Cyprus, Luxembourg and the Netherlands; the latter three largely represent money tied to Russian offshore companies.

The mechanisms China and Russia have set up to increase investment have so far not been working. The $4-billion joint-fund that was established in 2012 by China Capital Investment Corporation and the Russian Direct Investment Fund (with a managing company in Hong Kong) has not yet invested a single cent.