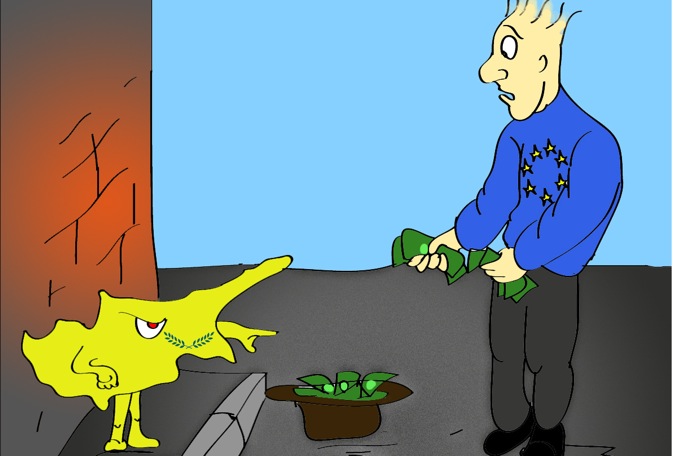 The unprecedented and steep deposit tax the EU wants to shove down Cyprus’ throat will shave over $3 billion in Russian assets. These are legitimate funds and not a mafia stash as some like to believe.

Yawn! Cyprus is a tiny country, who cares what happens there? Well if you are a Russian with tonnes of cash stashed away in the island’s banks, you most certainly do. In fact, even if you don’t have any deposits parked there, chances are the chain reaction from the European Union’s planned great bank robbery could one day hit your finances too.

For years Russians have treated Cyprus like their private little Switzerland. They have collectively pumped in over $31 billion in Cypriot banks, boosting the local economy and turning the idyllic island into an upmarket playground. Here’s how it could all come unstuck.

Cyprus is the latest addition in the long line of insolvent European countries – Portugal, Ireland, Greece and Spain – needing a bailout from the wealthy northern Europeans (read Germany). The solution is simple – the EU will provide nearly $13 billion in bailout money to help the Cypriot government pay its bills and avert a banking collapse.

Now observe that none of the other nations that came knocking at Brussels’ door with a begging bowl had such an avaricious levy imposed on them. The reason is plainly evident: over 40 percent of the depositors are Russians and, therefore, easy targets. The EU honchos evidently believe most of these Russian account holders are not legit and relieving them of a tidy amount doesn’t hurt the good gentry of Europe. Go back a little in history – the same set of people applied the same logic to sponge off Asia, Africa and the Americas.

Why are Russia’s leaders worked up?

The popular belief is that if Russian money travels outside Russia it must be tainted – by the mafia, graft, uranium smuggling or something like that. But in reality most of the money belongs to Russian firms. In fact both private and state-run companies use Cyprus as a tax haven because the country has a corporate tax rate of 10 percent which is 50 percent lower than Russia’s.

Here is how it works. Russian investors wire the money to shell companies in Cyprus. The money is then repatriated through investments in Russian ventures at home and abroad. According to data provided by the Russian central bank, Cyprus is the leading source of foreign investments into Russia.

Believe it or not, this is standard global practice these days. The United States uses Puerto Rico in a similar role and the role of Mauritius to pump investments in the Indian stock market and IPL cricket matches is well known.

A US Senate investigation last year revealed that dozens of American tech companies move their profits offshore to evade the taxman. Microsoft has saved nearly $7 billion off its US tax bill since 2009 by using such loopholes. Similarly, Hewlett-Packard avoided paying taxes through a series of loans that shifted billions of dollars between two offshore subsidiaries.

The $31 billion Russian stash belongs to corporates, banks and individuals. Cyprus offers them anonymity and ease of banking in their day to day business and personal lives. A 10 percent levy would amount to a $3 billion loss that could directly impact the Russian economy. This is why Russian President Vladimir Putin has slammed the move as “unfair, unprofessional and dangerous”. Indeed, if the Russians knew the money was tainted – and you can bet the FSB keeps an eye on the cash pipeline and every rabbit on the way – there’s no way Putin would have associated with it.

BRICS Bank on the anvil

As for corrupt Russian individuals and the mafia parking their ill-gotten gains in Cyprus, there’s no evidence to prove they are not there. But wouldn’t the mafia find more secretive havens like Switzerland or Britain’s Isle of Man? In fact, last year over $200 billion was wired out of Russia. Only a fraction of that reached Cyprus.

Mikhail Prokhorov, the metals magnate turned politician, wrote in Kommersant that Europe “has opened a Pandora’s Box, creating a dangerous precedent in deciding the problem of the capitalisation of the banking system in problem countries”.

Prokhorov noted that he held no money in Cypriot banks. Nobody in his right mind would call him a crook.

Alexander Lebedev, who owns major newspapers in London, said Cyprus was also a transit point for criminal money leaving Russia so such a tax doesn’t really affect transit. But he added, “There are fears for the middle class, who also used Cyprus.”

A run on European banks?

The proposed tax needs to be approved by the Cypriot parliament. But with ordinary – and hurting – Cypriots hitting the streets in large numbers, a vote in favour seems unlikely. But if the tax does go ahead, it would be akin to holding a banner warning YOU ARE NEXT to the PIGS countries. It could lead to an irresistible run on the banks. Note that banks in Cyprus were closed on Tuesday and Wednesday to prevent precisely that.

Trouble in Europe will also impact nations that export to the world’s biggest market. India’s rupee dropped to 54.2725 per dollar on Monday, the most in two weeks. This is the kind of news that the global economy, which is limping back from the recession, can do without.

The amazing thing about this ‘bailout’ is that ordinary people are being made to foot the bill for the negligence of bankers and European regulators who were clearly sleeping on the job. It makes you wonder how long such abuse can go on before people take matters into their own hands. Clearly, Europe’s leaders are playing a dangerous game with the people they lord over.

They’re going to get you

Did I say Russian depositors are easy targets? Well, not all of them. It is well known that the Russian mafia doesn’t like to be played with. Mainly, they don’t like their loot to be taken away from them. If you are a Cypriot lawmaker, here’s a piece of advice – don’t do anything stupid.

Bet you are wide awake now.