Russian fleet to return to the Mediterranean 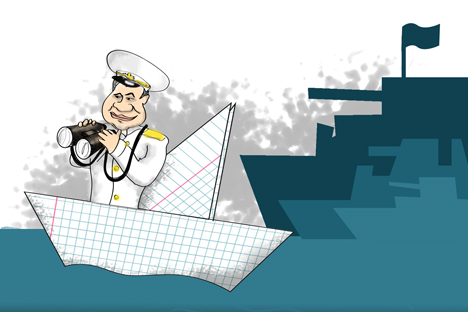 Russia's Defense Ministry and the Kremlin are going to re-establish a permanent naval presence in the Mediterranean Sea. While billions are being spent to upgrade the navy, experts say the motivation is not to threaten other nations.

Military maneuvers held by Russia earlier this year in the Mediterranean Sea have convinced the Defense Ministry and the Kremlin of the feasibility of re-establishing a permanent naval presence in the region. While billions are being spent to upgrade the navy, experts say the motivation is not to threaten other nations.

The recent statement made by Russian Defense Minister Sergei Shoigu that the Russian navy plans to re-establish a permanent presence in the Mediterranean Sea prompted a skeptical response from certain quarters of the media and expert community, since it was made amid reports of the fleet's poor technical condition and problems with the supply of new weapons.

Shoigu announced the decision to revive the Mediterranean navy squadron on March 11, at a meeting of the heads of the central commands of the Ministry of Defense and the defense industry. He stated that the decision had been made to "set up a naval task force in the Mediterranean zone, where the fleet will establish a permanent presence."

His speech gave the idea that the Russian navy was highly capable, as demonstrated by the exercises held in January of this year in the Black and Mediterranean seas.

The aforesaid exercises involved an inter-fleet group made up of over a dozen surface ships and submarines, along with 20 support vessels.

The North, Baltic, and Black Sea fleets landed troops on the Black Sea coast of Russia, repeatedly passed through the Bosphorus Strait, the Sea of Marmara, and the Dardanelles, and conducted more than 60 missile and artillery drills at air, sea, and underwater targets in the Eastern Mediterranean. Fuel, water, and food stops were made at ports in Malta, Greece, and Syria.

The results persuaded the Ministry of Defense and the Kremlin (no decisions are made without the president and the prime minister) that, as early as 2015, the fleet could have an operational, multi-purpose squadron of ships and vessels in the Mediterranean — as the Soviet Union once had. However, it is true that the comparison here does not work in modern-day Russia's favor.

The Soviet navy's 5th Operational Squadron, which was based in the Mediterranean throughout the 1980s, was made up of 70-80 vessels under the special forces unit “Vympel”: it included 30 surface ships, 4-5 nuclear and up to 10 diesel submarines, two floating workshops, 3-4 tankers, bulk carriers, minesweepers, service ships, refrigerators, hospital and rescue vessels, and seagoing tugs.

This veritable armada was tasked with preventing a nuclear missile strike against the Soviet Union by the U.S. 6th Fleet, which is based in the Mediterranean to this day.

At present, America is hardly likely to be plotting a nuclear attack on Russia — which is just as well, since the new operational formation could not hope to compete on equal terms. If all the surface ships and submarines from all four Russian fleets were added up, the total number would still fall short of the Soviet Union’s 5th Operational Squadron.

Moreover, the Russian fleets face the same difficulties as the Soviet squadron did, since Russia still has nowhere to station such a force in the Mediterranean. The logistical support point at Tartus cannot possibly be described as a proper naval base, and no one knows what will happen to it if the Syrian government falls.

On the other hand, the establishment of a Mediterranean task force provides an incentive for Russian sailors and shipbuilders to develop the fleet, enhance its prestige, and generally upgrade one of the most important branches of the armed forces. It can serve as a beacon to guide the navy and the defense industry toward building new ships and training sailors to undertake long-term missions and collaborate with foreign navies.

This includes the U.S. and NATO, with which Russia shares many challenges and threats — piracy, international terrorism, and the proliferation of missile technology and weapons of mass destruction, among other things. Russian sailors are tackling these very issues in the Horn of Africa.

There is another reason why Russia decided to set up a navy detachment in the Mediterranean: The armed forces have been allocated 20 trillion rubles ($647 billion) of budgetary funds to upgrade the military. New ships are under construction and military schools have drastically increased admissions of cadets.

These future officers and seafarers must hone their military prowess not on the shore, not anchored at port, not even on a computer simulator, but out at sea — preferably during long naval exercises in conjunction with other world fleets. The Mediterranean is the most convenient region for that purpose.

The defense minister is under no illusion that the task of forming a Mediterranean squadron will be easy.

"The overall condition of the fleet cannot be described as satisfactory," said Shoigu. "First of all, the navy has had no new ships or vessels for an extended period of time, and the schedule for routine maintenance has not been observed. As a result, in most cases the turnaround time is lengthy, and many of the ships and vessels are limited in terms of weapons and military equipment."

However, Shoigu does not conceal a trace of optimism: "Under the State Armaments Program to 2020, the fleet is to receive eight missile underwater cruisers, 16 multi-target submarines, and 54 surface warships of various classes," he said.

If the plans are realized, Russia can indeed expect to establish an operational squadron in the Mediterranean Sea on a permanent basis. However, in view of its present capabilities, it is unlikely that the Russian navy is taking this step with the intention of threatening or intimidating other nations. In all likelihood, it is simply driven by the desire to fly the flag of St. Andrew [the patron saint of the Russian navy].

Undoubtedly, a well-positioned fleet would boost Russia's international prestige, but more important is the motivation to revitalize the fleet.