Why Russia should focus on naval power 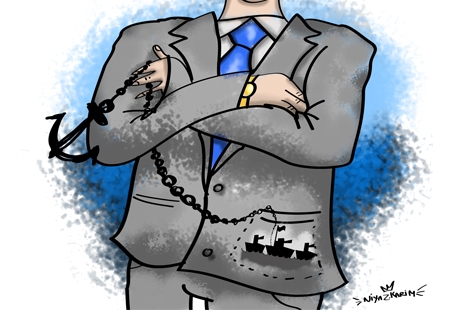 Russia, like many other "middle-class," actively developing or BRICS countries, is now rapidly trying to expand its naval presence in international waters. Expert Vasily Kashin explains why this “second world” phenomenon is connected to the changing dynamics of globalization and economic competition.

In recent weeks, the Russian authorities have made repeated statements about restoring the country's global naval presence, which was lost following the collapse of the Soviet Union.

It was announced that a permanent task-force fleet would be stationed in the Mediterranean, and Navy Commander Adm. Viktor Chirkov stated that similar formations could also appear in the Pacific and Indian Oceans.

Talks have been held with Vietnam on the use of the former Soviet navy logistics base at Kamran.

The new phase of Russia's naval expansion is nothing compared to the scale of the Soviet fleet that once patrolled the world's seas. The Mediterranean flotilla will consist of just 5-6 ships, utterly incapable of confronting the U.S. Navy. At Kamran, the best-case scenario would be the appearance of a logistical support point, whereas in Soviet times it was a full-fledged naval base, complete with a powerful defense system and permanently stationed troops.

Now it points to a different manifestation of globalization. Russia is just one of a long line of second- or even third-tier countries striving to establish an open-sea fleet.

Besides China (which claims to be the world's second superpower), naval programs are being developed by India (which is promoting the concept of an expeditionary fleet capable of operating anywhere in the world), South Korea (which plans to build an ocean fleet by 2020), Brazil a program to build an open-sea fleet is contained in their 2008 National Defense Strategy), and Japan (which is quietly but effectively establishing a naval force).

The desire to build an ocean fleet has also been expressed at various times by Iran and, somewhat earlier, Thailand — owner of the only aircraft carrier in South-East Asia.

The drive to create an open-sea fleet is the result of globalization — similar in many ways to the naval arms race at the turn of the 20th century.

Back then, more than a century ago, globalization was associated with the acquisition of colonies and semi-colonies by the European powers and the United States. In those days, the main threat to the interests of a great power came from rival powers. To protect colonies and transport links, they needed a powerful ocean-going, battle fleet. A weak, open-sea fleet made no sense, because it would have been destroyed in a direct confrontation with the enemy.

That narrowed the number of participants in the naval race to a handful of the most economically robust nations.

Today's version of globalization has ditched the idea of colonies and zones of privileged interests. Even economically second-rate powers — such as Russia and India — can have multi-billion dollar investments and thousands-strong colonies of citizens on other continents.

The main threats to the physical safety of these diasporas and investments do not come from opposing armies, but from uprisings, social unrest, terrorism, piracy, and other activities by non-state actors. The exorbitant price of direct military conflict between the major powers means that even mutually hostile countries employ tactics such as economic sanctions, blockades, and other non-military measures.

In these circumstances, a compact fleet capable of operating in open water is becoming a necessary tool for any large state with global economic interests. Developed countries in pursuit of their own global commercial interests either have their own open-sea fleet or are part of a military alliance with a country that does. All developing countries with global economic ambitions are currently building seaworthy fleets.

It is not about attritional rivalry with other powers. Rather, the goal is the creation of relatively compact formations able to deliver combat aircraft, cruise missiles, and special forces to any point on the surface of the globe, as well as to evacuate thousands of citizens from a hot spot. Such a fleet should be able to protect commercial shipping lanes from pirates and ensure the delivery of goods to any country against which unfair sanctions have been imposed.

In the absence of vessels specially equipped for such operations, Russia will make do with its Soviet legacy for the time being.

Nevertheless, the Russian fleet is capable of carrying out continuous and long-term anti-piracy operations in the Gulf of Aden and maintaining a prolonged presence off the coast of Syria, thereby reducing the likelihood of direct military intervention from outside.

Of course, any pretensions that Russia's new ocean fleet will rival the U.S. and its allies should be nipped in the bud immediately; Russia's attempts to confront the traditional maritime powers have usually ended in tears.

Vasily Kashin is an expert at the Center for Analysis of Strategies and Technologies.

The opinion is first published in Russian in Vedomosti newspaper.