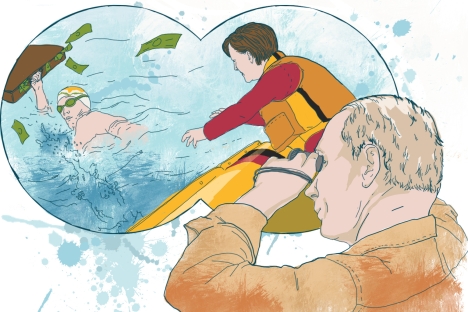 Bonds in the eurozone became overvalued, and Cyprus was left with the spillover from Greece’s financial crisis. It is up to the EU to ensure the crisis does not spill over any further.

Russia to raise 2013 capital outflow forecast due to Cyprus crisis

In 1998, then-Prime Minister Sergey Kirienko's government advised that the preferential tax regime with Cyprus be terminated. It shocked the Cypriot leadership: The island stood to lose half its business. The Cypriot president received a private meeting with Boris Yeltsin and convinced him not to cancel the privileges. As compensation, Cyprus agreed to buy and host an S-300 system, which had been paid for but not delivered because of opposition from Turkey.

In those days, Cyprus viewed Russia as a geopolitical ally. Even now, Cyprus provides services and maximum support for Russian business. However, the country cannot shy away from the fact that it joined the European Union in 2004 and the eurozone in 2008. Cyprus is no longer in control of its own destiny.

Recently, German Chancellor Angela Merkel has spoken a lot about the country's "dysfunctional" financial model. This has greatly undermined the credibility of the Cypriot financial system. The central indicator in all this is the ratio of banking sector assets to GDP, which is 7-to-1 in Cyprus. By comparison, banking assets in Luxembourg exceed GDP by a factor of 20, by a factor of five in Britain, and by a factor of around three (the European average) in Germany.

The "dysfunctional" Cypriot model came about because local banks were forced to write off Greek debt. It is possible that Cypriot banks were not very fussy when it came to buying Greek bonds, but all EU policy was aimed at saving Greece. Investors were convinced that the eurozone would not let Greece fail — or any other member of the union for that matter.

Therein lies one of the major contradictions revealed by the current crisis: For political reasons, investors overvalued eurobonds in the zone's periphery. Cyprus essentially became a victim of the spillover from the crisis in Greece. Now the situation in Europe is very fragile.

Cyprus can infect other countries, and not only because money will flee the island. The threat of a tax on deposits has spooked investors in troubled states, and the outflow of deposits from the entire European periphery could well accelerate.

Of course, the sought-after sum of €17 billion ($21.8 billion) could be produced by the EU itself. Here it is instructive to note two circumstances: First, Cyprus must demonstrate the ability to save its own skin, which is perfectly logical since no country would bother to reorganize its financial system otherwise. Secondly, there is a politically motivated unwillingness to help the "Russians," whose funds in Cyprus are of "dubious origin," according to eurocrats.

It is clear that European governments are finding it increasingly difficult to convince voters of the need to support the peripheral countries, and Cyprus is a convenient test case for them to demonstrate a tougher attitude.

What the upshot will be for Cyprus itself, no one seems to know. The details surrounding the bankruptcy of Laiki and the rescue of the Bank of Cyprus are still uncertain. What is clear is that even these measures will not raise the whole amount or eliminate all the risks.

After Merkel's pronouncement, the island's current status as a financial center is dead in the water. It remains to be seen how the financial flows will be affected, but, in any case, people’s standard of living will fall and many will be unemployed.

Inadequate support on the part of the EU and the ECB may even cause Cyprus to exit the eurozone. In such a case, the conversion of bank assets and the payment of salaries in the local currency would undermine the financial sector and reduce the quality of life even more than if the euro were preserved.

The main danger is that the risk looming over all the peripheral European countries will increase. The crisis will intensify, and it is just a matter of time before the next weakest link emerges.

The European Union bears full responsibility for ensuring that the crisis does not spill over. Therefore, it must take all measures to rescue Cyprus. If not, overcoming the consequences of the contagion will be far more costly.

Alexei Kudrin is the chairman of the Committee of Civil Initiatives and Russia's former finance minister .