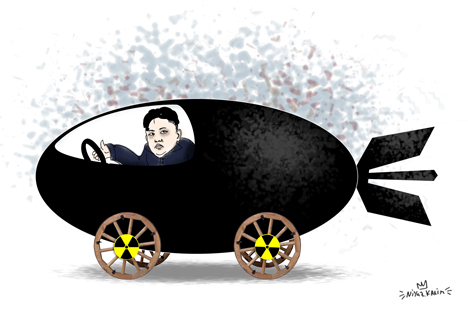 The reports that have been coming in from the Korean Peninsula in the past few weeks are disturbing and contradictory. On the one hand, tensions continue to escalate as Pyongyang and Seoul are locked in an upward spiral of threats to raze each other to the ground. This is the most severe situation since the 1968 Korean crisis, when DPRK captured the U.S. Navy spy ship Pueblo.

On the other hand, the 31 March plenary session of the Workers’ Party of Korea adopted a policy of economic development, to run in parallel with further build-up of the country’s nuclear forces. This event was followed by a session of the Supreme People’s Assembly, which re-appointed former Prime Minister Pak Pong-ju to head the cabinet. Pak is known as a supporter of economic reforms.

These developments suggest that, rather than unleashing an all-out war, Pyongyang is in fact keen to develop its economy. Of no less importance is the fact that, for the time being, people in both countries continue to live their normal daily life.

In analysing the current Korean escalation we must specifically look at two major recent events: North Korea’s announcement on 8 March that it was invalidating the 1953 armistice and all associated agreements with South Korea; and also Pyongyang’s cutting of the military hotlines with Seoul and Washington.

International media reports have been primarily focusing on Pyongyang’s increasingly belligerent statements that an order had already been issued to deliver nuclear strikes against U.S. military bases in different regions of the world, that North Korea is now at war with South Korea, etc. This news certainly cannot leave anyone indifferent.

However if we discard emotions and scrutinise the North Korean documents which are being cited by the media, we will find the following.

First, just as was the case with similar statements Pyongyang made in the past, the fresh threats clearly state that any military action would be entirely reciprocal, only to be resorted to if the country was subjected to an outside aggression. There are therefore grounds to perceive these public statements as a strong warning to North Korea’s opponents not to cross the “final line”.

North Korea is most likely harbouring no plans for a pre-emptive strike on its potential adversary.

Second, in considering the risky game that has again brought the two Koreas to the brink of open warfare, we should assess the role of all the parties involved, and their contribution to the present standoff.

The USA and South Korea are adding fuel to the fire of tension with just as much fervour. In fact, whereas North Korea has so been limiting itself to rhetoric (although admittedly fairly belligerent rhetoric), its opponents have been taking actual steps towards greater escalation of the conflict.

Washington’s decision to deploy interceptors in Alaska as a measure against a possible North Korean missile attack is one such step. Another is the use of nuclear-capable B-52 strategic bombers (for the first time in so many years) and a B-2 stealth bomber close to North Korea’s borders in the on-going joint US-South Korean exercises Key Resolve and Foal Eagle.

The scenarios of these exercises include practice bomb runs to imitate nuclear strikes against North Korea. This is no longer just rhetoric but actual military activities aimed, among other things, at intimidating and demoralising the opponent.

Any country would view such behaviour as an act of provocation, and would react correspondingly.

And yet Washington and Seoul have recently announced plans for another exercise, a third one in the span of the last two months. It will involve the two countries’ marine troops and will last the best part of April.

The exercise will be staged in a disputed sector of the Yellow Sea on the border between the two Koreas, roughly in the area where North Korean artillery bombarded South Korea’s Yeonpyeong Island in 2010 in an exchange of fire during a South Korean military exercise.

In the light of the current situation on the Korean Peninsula, and in order to prevent the worst-case scenario, the international community should immediately and unambiguously call on all parties either side of the 38th Parallel to exercise maximum restraint and weigh their actions against possible consequences.

Russia, with its historic strong interests on the Korean Peninsula and its vast experience as a mediator, has already committed to preserving peace in the region. Perhaps this time around it would be a good idea to join efforts with the Chinese partners.

Alexander Vorontsov is head of the department for Korean and Mongolian Studies at the Institute of Oriental Studies of the Russian Academy of Sciences.