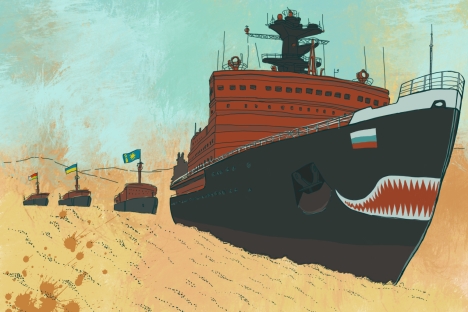 Russian Minister of Foreign Affairs Sergei Lavrov discusses the necessity of Russia’s independent, multi-vector foreign policy. According to the official, Russia’s foreign policy is not conservative in seeking international stability; rather, it aims to ensure peace, equality and representative, collective leadership for effective global management.

President Vladimir Putin approved the new edition of the Russian Foreign Policy Concept on Feb. 12. The draft Concept has been agreed upon by the government agencies most actively involved in international activities and has been examined by various divisions of the Presidential Executive Office. The Russian expert community, including members of the Foreign Ministry Academic Council, was involved in its preparation.

The main result of these discussions is the understanding that there is, in fact, no alternative to the current independent foreign policy course pursued by Russia. In other words, we cannot even hypothetically consider the option of Russia being in “wing position” to any other key player in the international arena.

The independence of Russia’s foreign policy is prompted by its geographical size, its unique geopolitical situation, its centuries-old historical tradition, its culture and the consciousness of the Russian people. This course is also the result of the last 20 years of the country’s development in new historical conditions – the period when, often through trial and error, a philosophy of foreign policy was formulated that best meets the interests of Russia at the present stage.

The main task of Russia’s international activities is to create favorable external conditions for an upsurge of the economy, for putting it on the track to innovation and raising the people’s standards of living.

Obviously, the goal of ensuring the progressive strengthening of the country’s potential can only be achieved in conditions of international stability. So, ensuring global peace and security is at once Russia’s duty as a global player, a permanent member of the U.N. Security Council, and a key issue for promoting its own interests.

In this respect, you sometimes hear reproaches that our foreign policy is conservative and is committed to the losing position of protecting the status quo, which inevitably changes. That is an obvious distortion of the Russian foreign policy doctrine.

Russians proceed from the assumption that the world is at a sharp turn and has entered an era of profound change, the result of which is practically impossible to predict. In this situation, the obvious choice is between sharpening frictions between cultures and civilizations – which may lead to an open clash – and deepening mutually respectful and equal dialogue in order to move toward a partnership of civilizations.

We are convinced that the most reliable way to prevent global competition from morphing into military confrontation is to work tirelessly to ensure the collective leadership of the major world powers, which must be representative in terms of geography and civilizations.

The activities of Russian diplomacy are aimed at exerting a positive influence on the global processes, in order to form a stable and – ideally – self-regulating, polycentric system of international relations in which Russia, by rights, plays the role of a key center. Russia is ready for a serious and all-embracing dialogue with all interested partners, starting from the understanding that nobody can claim to have the monopoly on the truth.

Russia is a convinced advocate of the method of network diplomacy, which implies the creation of flexible, mutually intersecting associations of states in accordance with their joint interests. One successful example of forming such an association of states located on various continents is BRICS.

As the president of G20, G8, SCO and BRICS in 2013–2015, Russia is vigorously pursuing the line of making these multilateral formats more effective in strengthening global management. This is one practical manifestation of Russia’s multi-vector foreign policy.

In accordance with its tradition, Russia will continue to play the role of a balancing factor in international affairs – a role that the majority of our partners confirm to be highly relevant. This is not only due to the international weight of our country, but also due to the fact that we have our own opinion about on-going events, which stems from the principles of law and justice.

Russia’s growing attractiveness is also connected with the broadening potential of its “soft power,” as a country that combines a rich cultural and spiritual heritage with unique opportunities for dynamic development.

Moscow is convinced that the views of leading international players on the more acute problems of our time have much more in common than they have differences, especially when it comes to ultimate goals rather than tactical approaches.

For today, everybody is interested in seeing a reduction in international and internal state conflicts, a solution to the problems of non-proliferation of weapons of mass destruction and means of their delivery, and keeping terrorist and extremist groups at bay.

So we are talking about overcoming individual or group egoism and becoming aware of the common responsibility for the destinies of human civilization in deed, and not only in words.

The opinion is first published in the International Affairs magazine.