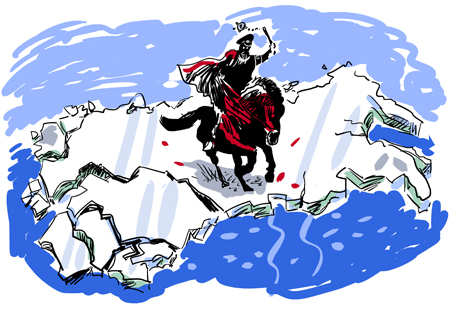 The country’s authorities should undertake drastic reform of the nationalities policy.

“The nationalities issue” remains a priority for Russia’s social and political development. In the 1990s-early 2000s, the media and experts focused on self-determination for ethnic minorities and individual republics (Chechnya being the most salient example), while, in recent years, various versions and interpretations of the "Russian idea" have come to the fore.

In 2012, according to the Russian Academy of Sciences Sociology Institute, about 10–15 percent of Russian citizens supported the “Russia for the Russians” slogan, and around 30 percent believed that ethnic Russians should enjoy broader rights and benefits than other peoples.

The massive demand for certain ideas generates a corresponding ideological supply. Ethnic Russian nationalism has ceased to be a marginal trend. The idea of “the special Russian way” is voiced more and more frequently, even by politicians who consider themselves to be liberals.

Although the provision on giving the Russian people the status of the core people of the state is not included in the Russian Nationalities Policy Strategy, it has been widely discussed at the highest level.

The results of the censuses conducted in 2002 and 2010 conferred a kind of legitimacy on the advocates of a “Russian revival.” Russians have never before accounted for 80 percent of the population – either in the Russian empire or in the Soviet Union – hence the conclusion that Russia is a Russian state in which the ethnic majority must enjoy preferential treatment in the administrative, business and public sectors.

According to a study carried out by the Public Chamber, if the party of Russian nationalists takes part in the 2016 parliamentary elections, it might win 10 percent of the votes. How does one account for such a development? What might be the consequences of the swelling ranks of supporters of the “Russian idea?”

Today, the “Russian revival” is portrayed as an irrational impulse on the part of certain dark forces. Granted, there is a lot of irrationalism and backwardness – but not only this. The growth of Russian ethnic nationalism is, in many ways, an objective process.

It reflects the transitional nature of modern Russian society, which has its roots in Soviet times but has yet to find itself a proper modern expression. All this adds relevance to the search for identity and arguments about what Russia should be like in the new century.

The growing popularity of the “Russian idea” is, to some extent, a reaction to the breakup of the Soviet Union, the dramatic change in the social status of Russians in the former union republics and the ethnic-state entities within the Russian Federation.

Noted Russian demographer Vladimir Kabuzan has aptly described the situation in some of the country’s regions as “internal Russian abroad.” While the Russian authorities long treated the ethnic majority on the basis of “we don’t care how the child amuses itself as long as it does not rebel,” all the liberal public expected from the Russian people was for them to repent the crimes of the imperial past.

These miscalculations and errors resulted in the “Russian question” being monopolized by extremists and the “Russian revival” being perceived as political revenge. Various forms of revenge have been proposed – ranging from calls for a drastic cut in immigration and proposals to establish “de facto” apartheid between central and southern parts of Russia, to reviving the empire under a “Russian flag.”

Yet all the versions of the “Russian revival” have the same ideological and political content: a penchant for a simplistic perception of the world, coupled with militant xenophobia and isolationism.

Another danger stemming from the “Russian revival” is the tendency to interpret a nation in biological terms. In that sense, Russian nationalism differs little from the national-separatist projects of the early 1990s. That is why implementation of the “Russian project” would be tantamount to an attempt to put out a fire by pouring petrol on it.

The Russian authorities should react promptly to the upsurge of ethno-political activity under the “Russian banner.” They should do so not by making high-sounding declarations but by undertaking a drastic reform of the nationalities policy, which must, at long last, replace folklore and ethnographic activities with a course of creating a single identity based not on blood but on common citizenship and state loyalty. Otherwise, the consequences may be dire.

If the authorities let the process of the “Russian revival” develop spontaneously, the question of the country’s unity will become irrelevant, because the center will exercise the right to self-determination – including separation from abhorrent “aliens,” which could be Russia’s own non-Russian citizens.

While the Russian ethnic nationalist movement is today represented by a plethora of political groups, tomorrow they may very well unite. Inaction on the part of the authorities would be the best encouragement for advocates of the “Russia for the Russians” thesis to integrate, thereby threatening Russia’ unity.

Sergei Markedonov is a visiting fellow with the Center for Strategic and International Studies, Washington, D.C.