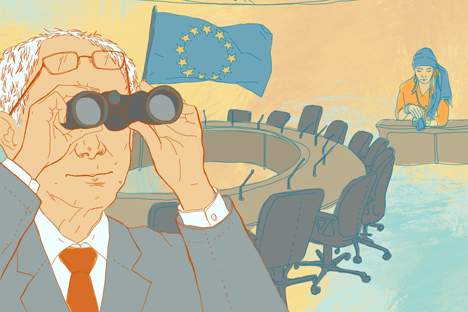 The period of EU expansion is being replaced by a period of consolidation.

The EU has no clear idea of where it should be heading. There is a growing need for forecasts, yet the accuracy of these forecasts is diminishing as the number of “unknowns” grows. The EU is headed for a period of consolidation, in preparation for a “re-launch” of the union.

In terms of the prospects of expansion, one can say with a fair degree of certainty that, in the next 10 years, the European Union will admit all of the West Balkan countries. There are the exceptions of Bosnia and Herzegovina, Albania and Kosovo, although Bosnia and Herzegovina and Albania will also become members later. Iceland will also join the organization.

Turkey is a special case. Never in the history of the EU has a state received candidate-country status (Turkey received it in 2005) and not become a full member. This is not to say that the situation will last forever.

Some scholars believe that the European Union will face collapse if Turkey joins, while others think that it may give a new lease on life to the union.

At the end of the day, both may be right. It would depend on the timing of the decision on Turkey’s accession.

The most favorable period will probably be the 2020s, when the European Union will be entering a new period of stability following the current political, socio-economic and financial crisis. Turkey, for its part, will still have enough political will to decide to join the European Union, even against the background of growing euro-skepticism in Turkish society.

However, if there is no accession in the new decade, the changing balance of forces in the region and the world – forces which will not be in favor of Europe – along with the emergence of Turkey as a full-fledged regional leader, may prompt Ankara to decide that it would be better off keeping its options open rather than handing over some of its sovereignty to Brussels.

It is highly probable that the European Union will spend the rest of this decade directing its efforts toward solving its internal development problems, finding itself in a high-risk zone economically, socially and politically.

It will have to go through a painful process of remodeling the social market, which has to become more competitive if the EU hopes to occupy leading positions in the 21st century.

As things stand today, it is hard to predict the withdrawal of any state from the eurozone and the return to national currencies. Firstly, mechanisms for such a withdrawal do not exist. Secondly, the negative impact and unforeseen consequences obviously outweigh the positive expectations – both for the failing states and the group as a whole.

The West European social market and the “welfare state” are living through hard times, although they are unlikely to be displaced by the Anglo-Saxon American model of development. Though they are likely to survive, they will most likely become less generous.

We can also predict further shifts toward democratization of the European Union, which was initially a project of national elites. The problem of a “democracy gap” has become so acute that it is hard to see how the situation in the EU can be stabilized without solving it.

The European Parliament will continue to strengthen, and European political parties are likely to begin appearing by 2020.

There is a good chance that, in the following years, the European Union will remain committed to deepening financial, budgetary and fiscal integration. Eurobonds may well be introduced in the coming years.

Thus, the fairly protracted period of EU expansion is being replaced by a period of deepening integration and consolidation. The European Union is poised for a “re-launch.” Financial and economic integration will lead to political integration.

There are both pluses and minuses in this for Russia. The emergence of a more consolidated foreign policy player would be a positive factor for Moscow, inasmuch as their interests coincide, for example, on the central role of the United Nations in international affairs.

However, where interests diverge – in the EU’s eastern neighborhood, conflicts in the post-Soviet space and the influence on the development of Central Asian states, for example – Russia will find it ever harder to capitalize on its privileged relations with some European capitals.

On the whole, the room for foreign policy maneuvers in relations with the European Union will shrink – and this includes oil and gas supplies. This will be especially true after the European Union member-states come up with a common energy policy, as they are likely to do in the next few years.

Therefore, further efforts should be exerted to create permanent mechanisms for coordinating and harmonizing the interests of the parties.

Aleksey Gromyko is deputy director of the Institute of Europe at the Russian Academy of Sciences, head of the Center for British Studies and a member of the Russian International Affairs Council.

The opinion is first published in Russian at the website of the Russian International Affairs Council (RIAC).