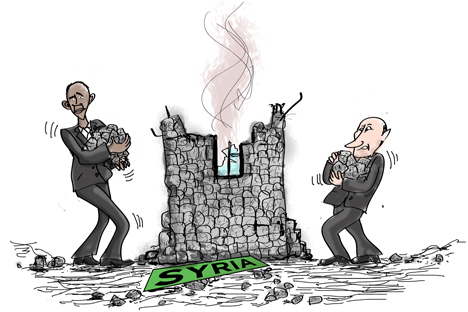 International politics analyst Yevgeny Shestakov considers Russia and the U.S. should not resolve their differences via international conflicts like the Syria crisis.

Events in civil war-torn Syria have demonstrated the lamentable inability of Russia and the West to agree on a mechanism to overcome the crisis. The only consolation is that it has made leading powers think about how to structure dialogue and where the fine line lies that separates fundamental contradictions from pragmatic policy.

On one hand, the recent talks in London between the Russian and British defence and foreign ministers can formally be described as a failure. Not even a hint of a compromise was achieved on the prospects for a settlement in Syria. And yet the two countries stressed the need to continue strategic dialogue. The ministers were at pains to emphasise what united Moscow and London, playing down the issues on which they failed to agree.

I would not describe this as a form of politeness. The emergence of new challenges – North Korea’s nuclear tests and the rapid development of Iran’s nuclear programme – have forced world powers to renounce confrontation in favour of partnership, such as it is.

Geopolitical competition is being replaced with the awareness that there are enough areas in which Britain and the US could interact with Russia to mutual benefit. But for this to happen, all sides have to move away from exchanging “pinpricks” under various pretexts and start “gathering stones” to build a new centre for managing international processes, along with the UN mechanism.

Whatever the explanations given in Washington for not going ahead with the final stage of missile defence in Europe, it certainly allayed some of Moscow’s fears for its security and created the prerequisites for a meeting between Vladimir Putin and Barack Obama at the G8 summit in Northern Ireland and later at the G20 summit in St. Petersburg.

I would guess that the publication of the names of Russians on the Magnitsky list, scheduled by the US Congress for April, will not provoke such a negative reaction from Moscow as one might have expected only a few months ago. Granted, a tit-for-tat response, publishing a list of US officials banned from entering Russia, cannot be avoided, if only as an obligatory diplomatic formality.

Whatever the cause of the UK court’s decision to postpone the Litvinenko inquest for several months, it is clear that this gave Moscow and London the breathing space to restore bilateral relations. These relations had been greatly weakened in recent years, when foreign policy dialogue was reduced to a minimum. Not the least of the reasons for this was the Litvinenko case, inherited from the previous British government.

Last month, the US ambassador to Moscow, Michael McFaul, tweeted a link to a 2009 Obama speech, in which he said that he wanted to see a strong, peaceful and prosperous Russia. Why did he choose to remember this speech now? Clearly, Washington has decided that it cannot build a fully fledged global security system without Russia.

Syria is still a partner

Attempts to resolve international problems without Moscow are doomed to produce more Syrias. The UN Security Council has been unable to adopt a consensus decision due to objections put forward by Russia and China. In Britain and France, demands are growing for unilateral supplies of arms to the Syrian rebels, bypassing existing Security Council resolutions and the EU’s embargo on this kind of operation. But supplying weapons to Assad’s opponents will amount to a death knell for international institutions, demonstrating their inefficiency in crises. That would speed up the global arms race, prompting non-aligned states to think about developing nuclear weapons as their best defence.

By contrast, Russia is calling on its partners to be more pragmatic and not renounce existing international institutions just to settle the Syrian crisis. Moscow is calling on its partners to “gather stones” and not to throw them at each other in the future. Pragmatism requires that all sides must refrain from publicly building up mutual tensions.

Differences over Syria or missile defence will not go away soon, but more discussion of these issues should take place behind the scenes. There are many areas where Moscow and the West agree more closely, and it would be beneficial if they were made public.