The business of children’s products 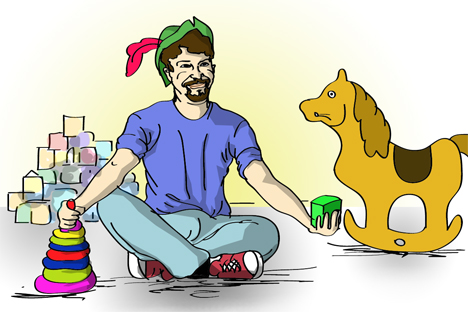 Why do we rarely talk about the involvement of children in creating products for them?

The business of children’s products is innovative and one of the focal points when it comes to commercialization of innovative technologies, making it valuable to manufacturers. First of all, the main trend in innovation these days is the production of smaller or miniature items, most of which are immediately accessible for children. Secondly, the manufacturing of a smaller version of a future product is one of the stages of innovation in industrial production, as is the manufacturing of a toy. And above all, the pattern of consumption has changed.

The period of "childhood" has been significantly lengthened, and the market for toys and children’s products has grown dramatically. The children’s market now also comprises of adult children and those who can be classified as having a “Peter Pan Syndrome.”  Such children are not just in their 20s, but even in their 30s and 40s. For instance, many adults enjoy regularly watching children’s cartoons. Comic books, children’s books, Spiderman costumes, roller skates and other childhood treats accompany a child along with university degrees into adulthood.  The consumption of children's products is growing and will increase in the future because these products, no matter how complicated, are easy to use and don’t require special training.

Simon Waterfall, co-founder of London ad agency Poke, analyses a list of phenomena that help us understand the world and along with this we can see some of the properties of the future. Since the advent of the typewriter, the keyboard has evolved considerably, but many people belonging to the older generation still type using the two index fingers. But if we observe children, especially when they play computer games, you notice that they use all 10 fingers. The good motor skills, which previously provided, helped in playing the piano are now being successfully used on a conventional keyboard.

Observing children getting text messages on the cellular phone, it’s easy to note how they use the thumb like an index finger. At first glance, these minor details are important, once we recall that this is something that changed in only a generation or two, and that technology has already made a difference in the physical functioning of human beings. It looks like in the future, new technologies will change our bodies, and how we receive, process and transmit information to our brain. These processes have been ongoing, independent of our will. Our children are different from us. Now we can safely say that the quality of human intelligence has been influenced not so much by the amount of gray matter as the quality of data transmission between neurons through synapses.

In an environment in which the child actively learns, interneuron communication multiplies, creating an extensive network of neurons in the brain. Thanks to this human beings are able to expand their knowledge. The more activated the brain and the emotions of the child, the greater becomes the nerve cells and the links between them. Revolutionary change in the environment in which children are immersed, leads to what is different than today's adults, a nervous system with synaptic ties. And this is a change at the physiological level. This is an occasion to reflect on the importance of creating an environment in which our children will grow up.

The children's products industry educates the consumer in the early stages childhood, helping a child in his formation and his direction of development. However, the effect of children on the formation of their own living environment and development is virtually ignored. Perhaps we were wrong? Children are great creators. Adults should not interfere, but rather create the conditions for the realisation of their children’s entrepreneurial abilities. Moreover, it is not necessary to do it through school lessons, as is often suggested.

Take the case of billionaire Richard Branson. His first commercial scheme was born when he was about nine years old. He decided that he would grow trees for Christmas. With a friend, they planted 400 spruce seeds in a field near the house. Planning a Christmas tree business, a boy of nine operated as an adult. A bag of seeds cost only five pounds, and the tree could be sold for two pounds. Seven hundred and ninety-five pounds of net profit, he thought!  But rabbits devoured his seeds and the young Branson took revenge. He managed to get the rabbits shot and sold them to the local butcher, for a shilling apiece. It helped the future billionaire make a small profit.

Naturally, Branson was supported in all of his “foolish endeavours” by his mother, who instilled in him a key fact: he would benefit from undertaking a business he loved and that he shouldn’t think too much about money when starting a business. Branson started a youth-culture magazine called Student at the age of 16. The central theme of the magazine was helping the youth: from struggling nurses who wanted to have their salary raised, those looking for students-tutors and pregnant unmarried girls. The publication, run by students, for students, sold $8,000 worth of advertising in its first edition, which was launched in 1966. The first run of 50,000 copies was disseminated for free, after Branson covered the costs with advertising.

Then there’s the example of Cameron Johnson, who started his first business at the age of 9, making invitations for his parents' holiday party. Word of his skills spread, and by the age of 11, Johnson had saved up several thousand dollars selling greeting cards. He called his company Cheers and Tears, making party invitations. Before graduating high school, he was recognised as one of the most successful young entrepreneurs in the world. As a teenager he started a dozen profitable businesses and at 15, he became the youngest American appointed to the board of a Tokyo-based company. Needless to say, he was a teenage millionaire.

Looking at these success stories, it makes one ponder over a question: "Why do we rarely talk about the involvement of children in creating products for them?" Industry does test children’s products on children themselves. In many developed countries, there are attempts among major manufacturers to test children’s products on children and involve them in the production and development stages. Children see better and know what characteristics their toys, clothes and other products should have. But this practice is not common in countries like Russia and India.

The major problem with the involvement of children is public perception. Childhood is considered a time when children are not engaged in constructive cooperation within the society. A lack of communication makes the society less functional. Teachers do not talk to doctors about how to cultivate the practice of a healthy lifestyle. Architects are not interested in the lifestyles of people they build houses for, especially given the fact that children take up considerable space in the house. This author would argue that the world at present has gone full circle from the days of child labour being a norm to a time when childhood is overvalued.

The concept of “economic attractiveness of children” is taboo in the subconscious mind of the people. Children, though, need to have a greater role and a greater say in society. Their learning and perception, attention to detail, spontaneity, intuition and creativity are in many ways superior to that of adults. These qualities are most valuable in times of change, when the technology and even social structures changed many times in one lifetime. These abilities in children will receive a new impetus to the development of the increasing complex children's toys (some simple things that imitate adult products become more sophisticated technical devices and their functioning complex for adults). Children’s products can also bring about a change in the educational paradigm: Toys and games can create a more stimulating learning environment within children. The days of formative education, when the only source of knowledge was a school teacher and textbooks, are gone. The advancements of technology have a newer requirement for children and it is imperative they become part of the environment that creates their own products.

The writer is a Moscow-based public activist and founder of international initiative “Generation 2030: Tomorrow Begins Today.”