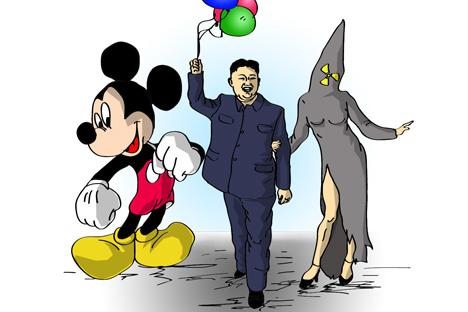 In early April, North Korea’s top leadership was shaken up – top military officers retired, civilian bureaucrats have taken over and a reform-minded premier has been reinstated. Korean historian Andrei Lankov argues that, while it is too soon to confidentially say North Korea is headed for a full-fledged, rational, market economy, the proposition is not implausible.

Drawing by Pototsky Dan. Click to enlarge the image.

Talk about escalating tensions between the two Korean states has distracted attention away from some other important developments within North Korea that would probably be much discussed in the media otherwise.

In early April there was a major reshuffling of North Korea’s top leadership. In some regards, these personnel changes are predictable. Yet some of the new appointments are remarkable and even surprising.

Last year was a time when power in North Korea dramatically shifted away from the military to top party officials. Lip service is still paid to the so-called “military first politics” (Songun) of the Kim Jong-il era. However, since his death, the military has undergone unparalleled purge.

Out of the four generals who walked next to Kim Jong-il’s hearse in December 2011, three have disappeared suddenly and without trace. The last one is known to have been released from his military duties and has been given a rather meaningless civilian job. A large number of North Korea’s top military officers have also been retired.

Another significant event was the partial takeover of the military by civilian bureaucrats. A good example of this is Ch’oe Ryong Hae, a lifelong party apparatchik who was promoted to vice marshall and made responsible for political indoctrination within the military. A former first secretary of Hwanghae Province, Ch’oe was ranked highest military officer in the party roster in April – well above career soldiers.

The greatest surprise, however, was the promotion (or rather re-promotion) of Pak Pong-ju, who was again made premier of North Korea. In the early 2000s, Pak was seen as a reform-minded bureaucrat. He is believed to be one of the masterminds behind the 2002 economic reforms – so far, the most radical attempt to restructure North Korea’s anachronistic and moribund economy.

When there was a backlash against “reformist tendencies” in 2005-2007, Pak found himself in trouble. In 2007, he lost his job as premier and was sent to the countryside to manage a chemical plant – a rather desirous demotion by North Korean standards. However, under the auspices of Kim Jong-un, he has made a comeback and, in early April, finally returned to the position he lost exactly six years ago.

What does it all mean? It would be premature to say that current developments indicate that North Korea is moving toward a more relaxed (or should we say more rational?) economic policy. Still, such an interpretation is looking more valid. The removal of these generals, most of whom are said to be hardliners, clears the way for some kind of radical change – assuming, that is, that Kim Jong-un’s government is willing to take the politically dangerous path of attempting to emulate China. Pak’s return to premiership seems to point further in the same direction.

It is often stated that North Korea’s economic reforms are not compatible with its outbursts of histrionics on the world stage, but this is not necessarily the case. Rather, in order to succeed, reformers may need to find a way to prevent the emergence of the active opposition. In this regard, it might make sense to aggravate international tensions from time to time. After all, reminding the North Korean public of the ever present outside “threat” is a good way to ensure it will become more docile and make less demands. In other words, loud talk about the imminent threat of foreign invasion is likely to be good for stability.

In addition, it is often argued that the influx of foreign capital will be vital to ensuring North Korea’s economic recovery. Therefore, the argument goes, tensions are bad for business. This is also not necessarily the case. Money from South Korea and the United States might come in handy for economic growth, but these funds are also dangerous, since such funds will likely be accompanied by the spread of information about South Korea’s prosperity. At the initial stages of reforms, such knowledge may be destabilizing.

Are we going to see a “reform with North Korean characteristics,” which might combine gradual moves toward a market economy with occasional saber-rattling? It is too early to say, but the proposition might be less farfetched than commonly assumed.