Why Russia will not forget the Iron Lady 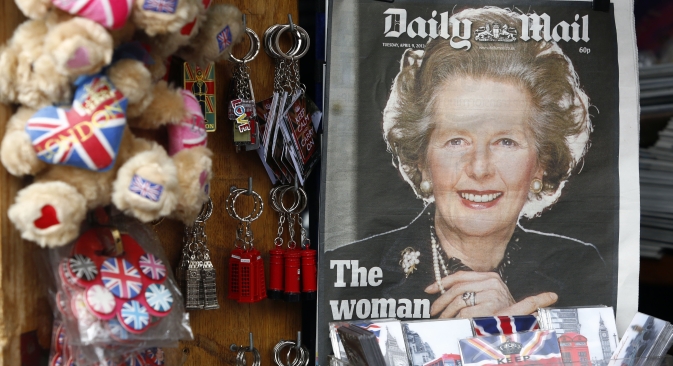 On the day of Margaret Thatcher’s funeral Konstantin von Eggert, former editor-in-chief of the Moscow Bureau of the BBC, reflects on the legacy left to the Russian intelligentsia by the Iron Lady.

When Baroness Thatcher died, my radio interrupted regular programmes to break the news and switch to special programming. This may sound an unusual step for a Russian radio station. But then the “Iron Lady” occupied a special place in the hearts of the Russian intelligentsia. She was probably the only Western politician who was ever genuinely respected and admired in my country.

I was a Moscow university student when the Falklands War began in 1982. I vividly remember how quite a few of us rushed to snatch the Communist “Morning Star” from newspaper kiosks (the only British newspaper we could read at the time) to follow the campaign and root for the British.

While the semi-alive Leonid Brezhnev was making the USSR sink deeper and deeper into the quagmire of the war in Afghanistan, here was someone who could actually lead a nation to victory.

Thatcher was everything the octogenarian Soviet leaders were not: energetic, determined, eloquent and passionate. After Mikhail Gorbachev's “perestroika” started, she conquered the hearts of many Russians once and for all.

In 1987, she was interviewed on Soviet television by three journalists – i.e. staff propagandists who for decades spouted lies about the “decay of the West”. It was a slaughter of the not-so-innocent.

The British prime minister used the interview to extol the virtues of free enterprise, democracy and individual responsibility in such an outspoken, yet elegant way that left the three stooges speechless and defeated.

It was the first time that the Soviet intelligentsia saw a democratically-elected politician in action – and we came away from our TV sets completely mesmerised. In her own way, Mrs Thatcher's contribution to the turning of Russian minds away from socialist dogma was not negligible.

The extent of Soviet penetration of the British trade unions, the Campaign for Nuclear Disarmament and other “fellow traveller” organisations is now much more evident than it was a quarter of a century ago. So the odds Mrs. Thatcher was against are even clearer now. Most of those tens, if not hundreds, of thousands of former Soviet citizens who now live and work in the UK could never understand the British left's visceral hatred of Mrs. Thatcher and Thatcherism.

Those who know first-hand what socialist slavery is see the late prime minister as an icon – a successful reformer, an accomplished military leader and a woman who could hold out and win in a men's world. Strength is an obsession with us Russians and, by God, she was strong.

It was probably inevitable, but the end of the Cold War signified the end of leadership as we knew it in the 20th century, at least in the Western world. Just look at the politicians today in the European Union or in the United States. None of them could even remotely be compared to Thatcher.

I suspect that if the “Iron Lady” was in No. 10 today, she would have preferred an honest face-off with someone more authoritarian, like Vladimir Putin, to dealing with the impotent Obamas and Hollands of this world.