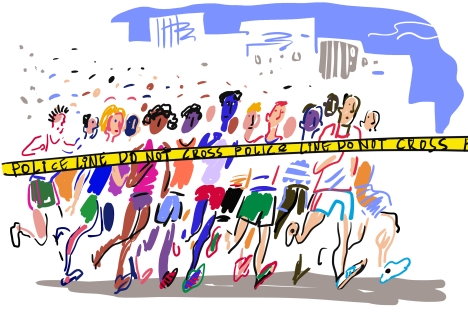 A long-time Russian resident of Massachusetts reflects on the Boston bombings and how the city will most past the tragedy.

Many Americans call Boston a boring city, and to a certain extent, I agree. Compared to Washington, DC or New York City, Boston lacks the patronizing self-assurance of the former or in-your-face arrogance of the latter. Boston is quiet, reserved and mindful on its own business, while privately exuding pride of the European beauty of its streets, worldwide reputation of its universities and the greatness of its professional sports teams.

I always felt that this low-key profile was one of the reasons why Boston has been spared of acts of terrorism. What purpose, I would ask myself, could terrorists see in attacking the city with no major government and financial institutions or national cult symbols, such as Times Square?

But I forgot about Boston Marathon, a signature event of the Boston spring, and I forgot about “soft targets.” Last Monday, two bombs exploded 12 seconds apart at the finish line of the annual Boston Marathon. Three people were killed and almost 200 injured in the blasts. It is a testament to the high professionalism of Boston’s doctors and the medical staff in the city’s hospitals that all 17 persons listed “in critical condition” a week ago are still alive today.

Given the amount of security cameras on Boylston Street, where the explosions took place—and the crowds of spectators snapping pictures of the runners and themselves—I had no doubts that the perpetrators of this crime will be soon identified. On Thursday, April 18, shortly after 5 pm, the FBI released pictures and video of two suspects, dubbed “black hat” and “white hat,” on the site of the blast, with “white hat” carrying a backpack believed to contain a bomb. The hunt for the suspects had begun.

Early Friday morning, I got an text message from my daughter: “Watch TV news!” I switched on the TV set, and there it was: a picture of two young men.

And a signature: Tamerlan Tsarnaev—dead; Dzhokhar Tsarnaev—at large. All of a sudden, things that I always kept separate in my head—the memories of the Oklahoma City bombing and the Dubrovka Theater siege, the horror of the 9/11 and Beslan, the shock of Moscow Metro blasts and the Times Square bombing attempt—all came swirling together right in my living room.

That Friday was completely surreal. The word of the day was “lockdown.”

A huge area of Boston and the immediate suburbs where approximately one million people lived was literally shut down, with government offices, schools, universities and private businesses closed; residents were urged to stay inside and not open the doors to strangers.

I was in the stage of a mental lockdown too: Unable to do anything else, I spent the whole day in front of TV watching images of the city’s most memorable places with no single live soul in sight. Or, for a change, a picture of a Humvee patrolling Boston streets.

When Dzhokhar Tsarnaev was finally captured late in the evening--and the whole city erupted in cheers - I felt more exhausted than after the hardest day at work. The last thing I remember before falling asleep was the sense of amusement at my grown-up children who, as if nothing has happened, went out to celebrate and spent the rest of the night partying with their friends.

The next few weeks will be the time for questions. Lots of them. What can possibly explain the apparently rapid transformation of the younger Tsarnaev from a “normal American kid,” as described by all his friends, to one of the most notorious home-grown terrorists in the recent U.S. history?

How will the American Chechen community, virtually unheard of only a few days ago, respond to the sudden media and public scrutiny? Who will take responsibility for the fact that a few dozens of armed, well equipped and supposedly well trained Boston police officers failed to apprehend two suspects, killing the one and letting escape the other?

Was the presence of a single armed criminal on the run a valid justification for shutting down the city where crazy guys with a gun and intent to kill is a fixture of daily life?

We have many miles to walk after this year’s fateful marathon.

In the meantime, life is going on. On May 26, the City of Boston is hosting another sports event: a half-marathon called “Run to Remember.” My daughter will be running, and my wife and I will come to greet her at the finish line in downtown Boston.

Eugene Ivanov is a Russian-born Massachusetts-based political analyst who blogs at The Ivanov Report.