What to expect after Iran’s presidential election 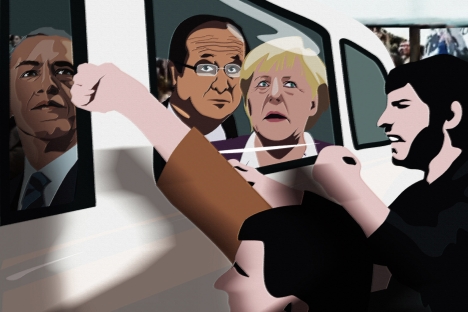 The presidential campaign in Iran got underway on April 21. No matter how events unfold in the Middle East, one thing is certain: Iran will remain at the center.

Drawing by Alena Repkina. Click to enlarge the image.

In two months, Iran will go to the polls to elect a new president. Whoever emerges triumphant, the world will view the result with hope. Mahmoud Ahmadinejad, renowned for his harsh, anti-Israeli and anti-U.S. sentiment, is leaving office, having served his maximum two terms.

However, all commentators recognize that it would be folly for the world community to expect any sudden changes in Tehran — including with regard to its nuclear program and its relationship with Bashar al-Assad in Damascus — even if a more moderate candidate prevails.

This means that the “Iranian issue” will still lie edgewise, including a final decision on whether Israel, the U.S. and the Gulf monarchies should accept the de facto nuclear status of Iran or prevent such a scenario at all costs.

A beacon of Islamic democracy

Ironically, prior to the Arab Spring, Iran was probably the most advanced democratic state in the Middle East (excluding Turkey, Israel, and occupied Iraq).

Compared with the Arab states, Iran stood out for the lively, pluralist nature of its politics. Elections were competitive, reasonably free and not a foregone conclusion.

Iran is, in many ways, a pioneer of the changes that have been sweeping the region since the early 2010s. Tehran did not welcome the events in Tunisia, Egypt and Libya for nothing, since all the dictatorial regimes were — if not overtly pro-Western — clearly anti-Islamic.

But Iran's enthusiasm dried up in Syria. Although the spirit of the secular and once pro-Soviet Syrian regime was far removed from the ideas of the Islamic Republic of Iran in terms of political structure, their joint rejection of Sunni dominance bound them closer than their ideological differences pulled them apart.

On the side of history

Although the historical framework is different, Iran 35 years ago and today's Arab Spring are linked by a single process: The awakening of the peoples of the Islamic East is leading to a fundamental geopolitical shift for which the major powers seem unprepared.

In the late 1970s, the tension inside Iran began to grow. For then-U.S. President Jimmy Carter, human rights were high on the agenda. Under his influence, the Shah of Iran relaxed the country's internal restrictions, which only stirred up the protesters.

Carter ended up not only having to provide sanctuary for the monarch, but also paying a huge political price himself. The seizure of the U.S. Embassy with a request to hand over the Shah, the scandal surrounding the publication of diplomatic correspondence, the catastrophic failure of the attempted operation to liberate the hostages and the humiliating bargaining with Tehran all cost Carter a second term.

In 2011, Barack Obama — another Democratic president — found himself in a similar situation. Loyal U.S. ally Hosni Mubarak was faced with mass protests. This time, Washington refused to support its long-standing partner, siding instead with the people.

The lessons drawn from the Iranian revolution mean that the U.S. was now fearful of being on the “wrong side of history.”

The burden of the past

The impasse with regard to Iran and the inability to find common ground are, in many ways, connected with the events of 1979–1980. America is secretly resentful that the insult has not been avenged, so hardlining is considered the only possible approach.

Some believe that a chance to turn the ship around was let slip in the late 1990s –early 2000s, when the relatively liberal President Khatami was in office.

On the eve of the new poll, no one is under any illusions: Whoever the president, Iran will reject external pressure. The only hope fed by Ahmadinejad's departure is that the openly provocative and politically incorrect statements will become fewer.

Of course, Iran's peculiar democracy could well produce an equally colorful character — all the more so given the people's growing dissatisfaction with the state of the economy as a result of biting Western sanctions.

No matter how events unfold in the Middle East, one thing is certain: Iran will remain at their center.

It will remain a pole of attraction for religious Shiites across the region dissatisfied with their lives. It will continue to be a major power with, at the very least, regional ambitions. It will still be a certain kind of political model.

And, in the event of acquiring nuclear status, it will be a state capable not only of changing the balance of power, but also a state capable of effectively erasing the Treaty on the Non-Proliferation of Nuclear Weapons, which is teetering on the brink of survival.

The next president of Iran is already guaranteed a place in history: Either he himself will something momentous, or, more likely, it will happen against his will.

The original version of the opinion is abridged and first published in Russian in the Ogoniok magazine.