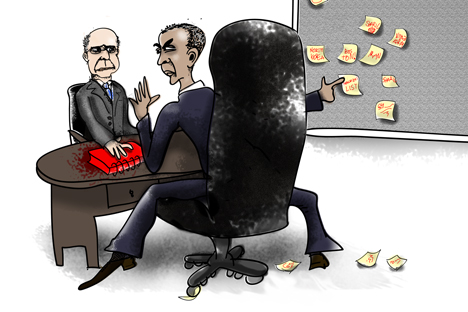 Fyodor Lukyanov, the chairman of the Presidium of the Council for Foreign and Defense Policy, explains why the Magnitsky Act will have long-term consequences on U.S.-Russia relations.

Conflicts associated with the Magnitsky Act are not going away any time soon. Congress will not drop the subject, and the White House is not willing to take any risks that might be involved in removing this irritant to U.S.-Russian relations.

Yet another step – arguably a conciliatory one – has been made in the U.S.-Russian confrontation caused by the Magnitsky Act. According to the U.S. State Department, there are 18 names on the list of persons subject to U.S. sanctions – a very limited number, compared to the nearly 300 names originally proposed by Rep. James McGovern of Massachusetts.

The congressman was quick to declare, however, that the work was just beginning and the document would still be expanded.

There can be no doubt that the work – or, more precisely, the political tug-of-war –between the U.S. administration and Congress (for which the tragic fate of the Russian lawyer is but one reason) will continue. After all, the story contains not only a bilateral aspect, but a domestic policy aspect, as well.

Yet there is also another reason.

The Magnitsky Act, passed at the end of last year as a result of a combination of specific reasons and interests, has become part of the American political toolkit, and Capitol Hill will not abandon a tool that can be used not only in connection with the Magnitsky case.

The Obama administration was never enthusiastic about Congress’s intention to give the Magnitsky case an international dimension. The White House and the State Department did what they could to slow down the process, in a bid to minimize the damage it would do to relations with Russia.

They were doing so for purely pragmatic reasons, rather than because of any sympathy for the Kremlin. The U.S. administration has a host of specific matters to resolve in conjunction with Moscow, mostly related to settlement of regional conflicts (Iran, Afghanistan, Syria, North Korea, etc.).

Congress, on the other hand, is not burdened by the need to take such considerations into account. The running joke on Capitol Hill is that every representative and senator has a foreign policy of their own, dictated by electoral concerns. After all, members of Congress are on a perpetual campaign trail, as the composition of the U.S. legislature is up for renewal every two years.

As a rule, American congressmen have no time for peripheral matters, which is where more-or-less all international affairs belong.

An agenda for foreign affairs can only gain traction in a couple of ways: If it directly concerns the interests of certain voters; if it is skillfully and actively promoted by lobbyists; or, if it provides the politician with an opportunity to establish himself or herself as a staunch supporter of values. The last method is especially effective if such a principled position contrasts with an opponents’ compromising stance.

The Magnitsky case combines a number of story lines that drew the interest of both representatives and senators. The topic surfaced through the lobbying efforts of Magnitsky’s employer, William Browder. It was Browder (working together with his colleagues) who was able to make waves on a global scale.

The need to repeal the Jackson-Vanik amendment – which had started getting in the way of American business – served as a catalyst to passing the legislation. Since Congress cannot simply up and annul a sanction against Russia (this would have been seen as a concession, even if the measure had long stopped making any sense), the idea to link the repeal to a new “act of retribution” was born.

The acute ideological confrontation between the Republicans and the Obama administration makes it an imperative to attack the White House in areas that are important and considered effective. Since the “reset” of U.S.-Russian relations had long been viewed as a relative success for Obama, it was only natural to deal a blow to it. It provided a good opportunity to accuse the U.S. president of forgetting about moral imperatives.

Finally, as one shrewd American observer has noted, as soon as American lawmakers became aware of the Magnitsky tragedy, they could not but be moved by it, because the victim was a lawyer – that is, a person of the same background and social origins as the vast majority of members of Congress.

Consciously or not, they projected the circumstances of Magnitsky’s death on to themselves, which only radicalized their approach.

This brings us to several conclusions for the future.

The conflicts related to the Magnitsky Act are here to stay. Congress will not drop this case – more for general reasons than because of Russia specifically. The administration will try to control the damage done to bilateral relations by the collision, but it is unlikely to charge ahead and take risks in order to get rid of this irritant.

The White House might still find the law a useful tool in the future. Plus, Obama and his team have an extremely intense palette of relations and interdependencies with Congress, whereas U.S.-Russian ties are far from the most important element. They are unlikely to want to expend political capital on such an issue, considering that they might need it badly for some other matters one day.