Freedom’s just another word for nothing left to lose 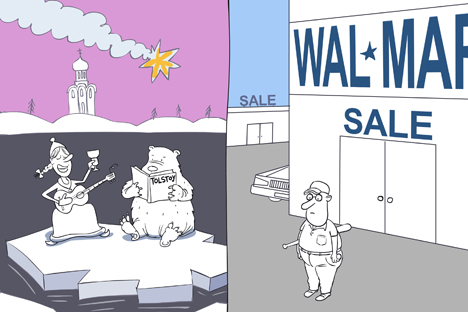 Author and longtime Russian expert George Feifer turns conventional wisdom on its head and explains the ways in which Russians are free and Americans are dully imprisoned.

Drawing by Sergey Elkin. Click to enlarge the image.

When Denis Diderot visited St. Petersburg at Catherine the Great’s invitation, the great philosopher and founder of the Encyclopedia whose writings made substantial contributions to the Enlightenment sometimes sounded like a selfish sophist.

How could anyone have said he “had the soul of a slave in France, where men thought they were free, and of a free man in Russia where men were called slaves?”

Feel free in the Russia of 1774, the vast majority of whose population was straightjacketed in serfdom?  But many Americans who have lived with Russians at home or abroad think that’s not absurd.

My own years in Moscow, during Soviet rule when many restrictions on my notion of fundamental freedoms remained abhorrent, told me Diderot was on to something.

Libraries have been written about the similarities of Russians and Americans — which is true in some ways deriving from our still relatively rough-hewn nature after national childhoods in wide-open spaces where formality counted for little but decidedly not in others, such as attitudes to work and to pleasure.

Russians can work all other peoples I know, including Americans, under the table, as they easily do with drink and maybe still combat, as during World War II, when motivated by a cause, ambition or an ideal.

However, relatively few are much moved by getting a job done for its own sake as opposed to from a personal calling by flesh, blood or fantasy.  As for pleasure, my experience has been that they enjoy it with considerably more abandon and less guilt than Americans, many of whom remain in the grip of one or another Puritan inhibition.

But it’s Diderot’s seemingly puzzling statement about freedom that prompts skepticism. I’d have felt even more hesitant to add my two cents to all that has been written if I hadn’t spent much of my working life in contact with Russians.

Having done so, much of my answer lies in the yawning gap between how they live their private and public lives.  As people, many I know are a treat because they behave distinctly more as free spirits than Americans who forever boast about their freedoms while fearing to be seen as eccentric.

As citizens, they’re invariably much less appealing, no doubt because their government has almost always been fairly-to-seriously miserable over the centuries, and the country’s civil society was and remains deplorably weak.

Starting with not needing to pretend you’ll soon be a success with them or in a good mood when it’s bad, their appeal as people — here meaning the kind likely to read this newspaper: roughly my counterparts with good but not exceptional education and social standing — is great even when their politics disappoint.

Long ago, a Intourist guide told me her training included practice in smiling for Americans because, she was instructed, we’re uncomfortable without that reassurance that has something in common with advertising when there’s no reason for it.

I value the Russian toleration for aberration even more. The country sometimes seem­s to me a giant preserve for oddballs — my category too — who seem to feel entirely at home.

A fairly recent description of the Russian psyche as managing to make its owners “broad, generous, reckless, narrow, mean, calculating — not in fits and starts, but all at once” seems to me on the mark.

As with the characters of Russian fiction, many seem emotionally uninhibited enough to hide little, from balmy generosity to gross vanity and grabbing.

“Our country possesses certain peculiarities that verge on the fantastic,” Tatyana Tolstaya, a distant relative of Leo Tolstoy, wrote in 2003.  “Russia has its own logic, which its most intelligent people have been unable to explain.”

Of course misfits are often unhappy but they can also be free in their way, a freedom of which few Americans are aware any more than of their own conformism.

While most were convinced Russians were robots during the Cold War, those with whom I kept company seemed to be connected to the legendary and real Russian disorder that gave the country a certain consistency, even if not order itself.

Americans driven to “make it” know little about the profusion of nonchalant and impetuous conduct — of impulse, whim, caprice, extravagance, obsession, unpredictability, insouciance, impracticality, surrender to urges, willingness to lose, willingness to expose self-doubt and vulnerability — and few would envy it if they did know.

Whether or not the Russian instinct to seize the moment developed because there were sadly few moments to seize, it’s powerful.

In “Comrade,” a play performed in New York by Vladivostok’s Maxim Gorky Drama State Theatre, the son of a very rich American living in Paris in the 1930s, keeps complaining about how boring everyone else is compared to Russians.

Lamenting his bad luck for not having been born in Russia, he tells his sister they must make the other guests at an upcoming New Year’s party think they’re also “gay and mad and charming.” “We’re congenitally dull,” he confesses to the butler.

“The trouble is, we’re congenitally savage,” replies the butler, a Russian prince who fled after the revolution for whom New Year’s is occasion for lament rather than celebration.

“Sentimental but barbarian.”  “Everything’s so sad, isn’t it” adds the butler’s wife, a former grand duchess who is now a maid. “Even happiness.”

“Comrade’s” half-caricaturist reflections about the Russian character rang bells for me, and so did an admirer of “America — What a Life!” the huge bestseller in Russia by veteran journalist Nikolai Zlobin about the American character.