Global politics: In search of the world's new policeman 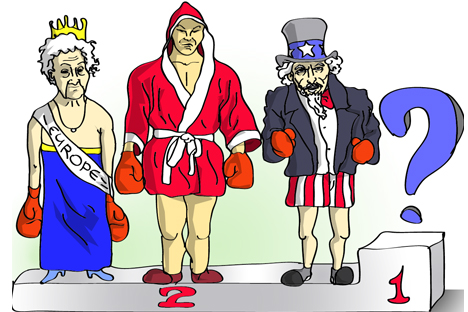 A global power vacuum has emerged on the planet in recent years. The United States has grown tired of its role as the world’s policeman and Europe clearly has too much on its plate. The search for a new world leader inevitably leads to Asia, but the continent has problems of its own.

In 1998, then-U.S, Secretary of State Madeleine Albright called the United States “an irreplaceable nation.” Fifteen years later, the U.S. is more like an exhausted nation, a superpower in decline that is more interested in its domestic affairs than in Afghanistan or the Middle East.

It’s hardly a coincidence that in his second inaugural address, President Barack Obama made no reference to John F. Kennedy’s famous words from his 1961 inaugural: “In the long history of the world, only a few generations have been granted the role of defending freedom in its hour of maximum danger. I do not shrink from this responsibility – I welcome it.”

Obama’s predecessor, George W. Bush, had a messianic vision for U.S. foreign policy, but Obama seems to favor the Eisenhower doctrine, whose proponent, despite being a war hero, during his eight years in power (1953–1961) did his best to avoid shedding blood – or at least American blood.

While this change of paradigm is not the end of the world, it’s hard to predict what will happen if America further pursues this isolationist stance.

There is nothing surprising about this exhaustion. Since the end of the Cold War, American soldiers have spent twice as much time at war as they had in preceding decades. Washington has injected unprecedented amounts of money into defense: the U.S. spent more on defense in 2011 than the next 19 nations combined.

It doesn’t take a rocket scientist to figure out that military spending played no small role in creating the country’s astronomical $16 trillion debt.

Obama’s latest address had a different message: that the decade of wars was about to end. The current U.S. president, a Nobel Peace Prize winner, didn’t come up with a succinct definition for the modern national idea, which could be spelled out as follows: America’s welfare and well-being are much more important than the rest of the planet.

Making forecasts for the modern world is a task that is as thankless as it is difficult. But it seems like Barack Obama’s second term won't bring great changes to U.S. foreign policy.

The economic and financial situation in the United States no longer permits the country to maintain its position as the world’s policeman – not only is this mission difficult, it is also very expensive.

So who will replace the U.S.? China has been somewhat distracted from foreign policy by its obvious economic problems; Russia has long lost the erstwhile might once possessed by the Soviet Union, which would have certainly taken advantage of such an opportunity. For India and Brazil, it’s obviously too early to be thinking about world leadership.

International organizations are dogged by serious problems too – the UN, NATO, and the EU are all reconsidering the entire system of their values in search of a place in the modern world.

In the U.S. itself, the prevailing opinion is that Europe can and must replace it in the post of global policeman. But the fact that the Americans want it this way doesn’t necessarily mean that the Europeans agree.

The most unpleasant thing for supporters of Europe’s new role is a lack of unity in the united Europe. This has been clearly demonstrated by the crisis and intensified disputes over austerity policies to combat it.

The bottom line is the U.S. doesn’t want to remain the global leader, while Europe is unable to become one. However you slice it, China is the most likely candidate.

As soon as Beijing sorts out its economic problems – which are not even close to what both the Old and the New World are experiencing right now – its hands will become untied. And China has never lacked the will to outdo America in everything.