G8: Does Russia stand among the great nations? 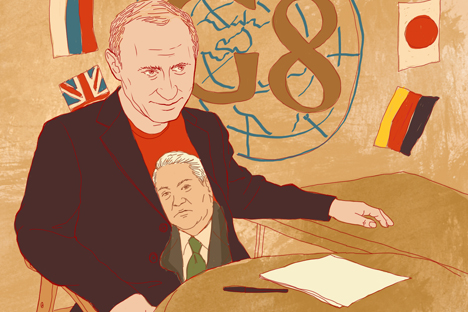 Russia debuted as a fully fledged G8 member in May 1998. Over the past 15 years, it has joined practically all international organizations it has aspired to. So what does it have to show for it?

Drawing by Natalia Mikhailenko. Click to enlarge the image.

It is almost exactly 15 years to the day that the first G8 meeting took place in Birmingham. It was an informal forum of the world’s eight leading industrial nations, to which Russia had just ascended.

Fifteen years later, Moscow has not only become a member of nearly every international club, but it has also gained experience chairing most of them. But has Russia taken a place among the global leaders – the nations that decide the fate of the world?

Birmingham '98 was a crucial milestone for the new Russia. Since the collapse of the USSR, Boris Yeltsin had sought membership in exclusive clubs in order to reclaim the symbolic status of a great power.

But just three months after its Birmingham debut, Russia defaulted on its debts and sank into a painful economic and political crisis. The illusion of equal status with the great powers dissipated very quickly when Russia had to beg Western governments for urgent financial aid, only to be turned down.

It’s rather strange looking back. Russia has long turned from a debtor into a lender, and has been discussing with the countries it used to ask for money how to help the single European currency or to bail out certain eurozone members.

Russia has long since earned its place in the most prestigious club on the planet.

That said, the state of affairs within the club and the environment surrounding it have changed dramatically since the late 1990s – and not for the good of the G8.

In the mid-1970s, at a time when a mechanism for informal consultations among the leading Western economies was just emerging, the point was to hold extremely frank discussions about the real state of affairs in as closed a format as possible.

As they expanded (from the original G5) and attracted more attention, the summits were gradually turning into a political show.

Fundamental shifts in the global power balance have stripped the narrow-circle meetings of much of their importance. At some point it became clear that discussing the global economic outlook without China was simply impossible. But welcoming Beijing into the G8, supposedly a community of democracies, wasn’t acceptable either.

The emergence of the G20 at the height of the 2008 crisis has resolved this dilemma, although the G20 has failed to become a global government.

Having played a positive role at the initial stage of the crisis, when the mere fact of representatives of 20 leading economies getting together had a soothing effect, the forum has since evolved into a fairly protocol undertaking.

Nevertheless, every country that has found itself at the helm of the G20 has tried to use the opportunity to fashion itself as a responsible global power. Now it’s Moscow’s turn.

Russia has repeatedly presented initiatives on global issues over the past few years, yet all of them have fallen flat. The reason is two-fold.

On the one hand, Russia is yet to learn how to demonstrate leadership in the new world because of the inferiority complex it still feels following the collapse of the USSR.

Plus, Russian politicians have not yet mastered the art, so brilliantly perfected by their Western colleagues, of how to wrap their own selfish interests in an extremely altruistic looking packaging.

On the other hand, global initiatives simply no longer work in the modern world. There is no infrastructure – whether formal or not – to work in to implement ideas.

It has become commonplace in today’s world for decisions made at the global level to work the worst. The most glaring case in point is the failure of UN-sponsored efforts to control climate change.

Energy saving and greenhouse gas emission reduction technologies are starting to proliferate everywhere at the national level – but for profitability and competitiveness rather than for the sake of saving  humankind.

During the 15 years since Boris Yeltsin first attended the G8 meeting as a fully fledged member, Russia has fulfilled and even over-fulfilled the task of achieving a high international status set by its leadership back then. But it’s still unclear what actual role it will have to play in the years to come.

It’s the quality of Russia’s domestic development rather than its ability to present itself correctly at international forums that will ultimately play the decisive role for the country’s positions in the world.