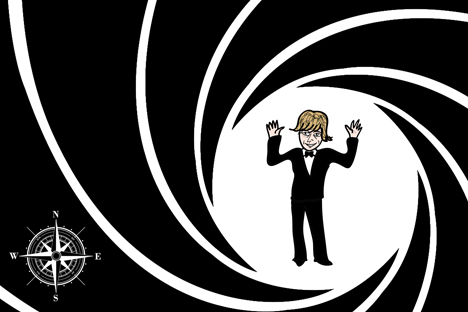 Moscow views the incident as falling within the boundaries of traditional rivalry between the secret services of both superpowers.

I learned about the detainment of the American spy and third secretary of the U.S. Embassy, Ryan Fogle, while I was in Morocco at a conference.

Participants in the meeting, including some of Washington’s sworn enemies – political observers from Iran, representatives of the Palestinian movement HAMAS from Gaza, and members of Hezbollah – were discussing the outlook for cooperation between Russia and the West in a new Middle East at the time.

But after hearing about the spy scandal, none of them relished the thought of a potential deterioration of relations between Moscow and the United States.

On the contrary, some participants noted that a cautious rapprochement between Moscow and Washington on the issue was a positive trend.

Perhaps such restraint in assessing the Moscow incident is largely explained by an understanding that it won’t affect the Russian–American dialogue over the short or the long term.

It is possible that the Russian special services that took part in the operation to detain the American spy had an understanding of the existing positive trend in relations between Moscow and Washington.

That’s why they weren’t afraid of making the situation worse by their actions.

It’s a moot question whether Russia’s Foreign Minister, Sergei Lavrov, knew about the impending detainment of Fogle before his meeting with U.S. Secretary of State, John Kerry, in Sweden.

But the fact that the top diplomats of both countries didn’t waste their time parsing the detective yet "theatrical" story of an American spy who went on a recruiting mission carrying a set of wigs, a briefcase full of cash, an old mobile phone and a compass has demonstrated a lack of desire on the part of the foreign ministers to meddle in the affairs of the special services.

It’s obvious that they deliberately avoided discussing the sensitive issue, because one of this year’s most important foreign policy events was at stake – a second international conference on Syria, where Russia and the West will once again try to bring together all interested parties capable of exerting some real influence on the participants in the regional conflict.

Moscow’s declaration of the detained American a persona non grata was a natural response from the Ministry of Foreign Affairs to this situation.

At the same time, despite the highly publicized detainment of the U.S. citizen, the Kremlin’s reaction was very muted: it expressed regret over the illegal actions of a diplomat that lowers the level of trust between the two countries.

Will the Moscow incident trigger a new war between the special services of Russia and the United States?

I don’t think this is going to happen any time soon – the Americans need a multi-track dialogue with Russia these days, and an overreaction to a spy scandal can have a negative effect on the intensity of the political dialogue. And nobody is interested in such a turn of events.

Still, why was the third secretary of the U.S. Embassy detained in such a publicized manner? Was it only because the diplomat had become "impudent," as an anonymous source at the Russian special services told an American newspaper?

It’s not only that, and there could be various explanations. I find the version that the FSB’s operation was directly tied to the American investigation into the Boston attack to be the most plausible.

The attack has triggered a public squabble between the Russian and American law enforcement agencies. The Russians claimed that they had long alerted the U.S. special services to the Tsarnaev brothers, but they paid no attention.

Not to be outdone, the Americans accused their Russian counterparts of allegedly withholding information.

Let’s look at the facts: A third secretary at the U.S. Embassy in Moscow tried to pay a million dollars to recruit a Russian special services officer who was dealing with the Caucasus and had access to information, including information on the Tsarnaev brothers.

Perhaps the U.S. special services counted on this information to corroborate the American story and rehabilitate them in the eyes of the White House.

The CIA’s forceful approach irritated the Russian law enforcement agencies that decided to detain the American on the eve of the Lavrov–Kerry meeting.

Naturally, the spying incident won’t be forgotten altogether. In particular, it will affect the reputation of U.S. Ambassador to Moscow, Michael McFaul, who could not have been unaware of the activities of his mission’s third secretary.

The diplomat will now have to answer difficult questions about the spy story at his meetings in Russia.

That said, most Russian experts and politicians are not expecting a new wave of anti-American sentiment from ordinary Russians.

Moscow tends to view the detainment of the American spy as a purely local incident that falls within the exclusive purview of the traditional rivals, Russian and U.S. special services. They refute allegations of a political contract hit circulated by some American media.