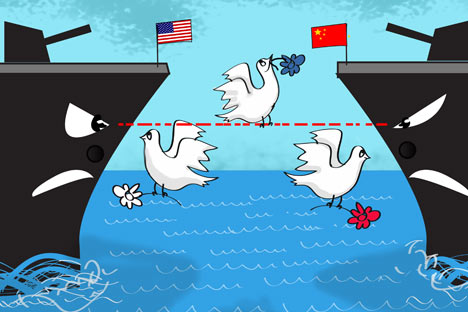 Increased economic, political and, potentially, military competition in the Asia Pacific is becoming a core of global politics. Russia can play a critical role in the world political architecture if it successfully defines its policy in the region.

China’s tremendous economic growth in past decades has long become a conventional part of global agenda. If current trends continue, the world’s most populous country and the largest exporter is on a fast track to becoming the world’s largest importer next year, the largest economy in terms of GDP in few years and the largest consumer market by 2020. However, Beijing’s April 2013 announcement that it will continue developing armed forces "commensurate with China's international standing and meet the needs of its security and development interests" attracted a lot of international attention.

Russian international affairs experts and practitioners once again started reconsidering the role of Moscow in the new global power structure centered around Sino-American competition that is expected to last for decades. In 2010, the US released a Quadrennial Defense Review Report that starts with a description of a changing global situation by admitting China’s rise. “China is developing and fielding large numbers of advanced medium-range ballistic and cruise missiles, new attack submarines equipped with advanced weapons, increasingly capable long-range air defense systems, electronic warfare and computer network attack capabilities, advanced fighter aircraft, and counter-space systems” says the report. Russia has a more considerate view of China’s increasing its military power. According to the Deputy Head of the Institute of Contemporary International Studies at Russia’s Diplomatic Academy Ivan Safranchuk, “the most likely conflict China may have is a conflict involving US allies and US weapons – that is the reality China lives in. Of course they have to think how to be prepared for it”.

Since publication of a 2010 Quadrennial Defense Review Report, the United States has been reviving relations with allies to balance already existing and potential power of China. The US network of alliances in the Northern Hemisphere is based on two major pillars: NATO in the Atlantic and bilateral security arrangements with several countries and territories in the Asia Pacific including Japan, South Korea, Taiwan and the Philippines. Moscow has not been part of a military alliance with the US since World War II, however, it is also reluctant to join security agreements with other great powers. Russia’s foreign policy concept shows that it envisions itself as an independent pole of power in the multipolar world being equally a member of G8 together with Western powers as well both BRICS and SCO together with China.  According to the Program Director of the Russian Council for International Affairs Ivan Timofeev, “Russia is not interested in joining any of the sides in the US-China competition and it probably won’t unless it is forced to. Moscow cannot risk its economic ties and good neighborly relations with China by joining Japan and South Korea in an alliance but it is also not going to become China’s junior partner”.

Obama’s administration focused on establishing a network of economic alliances similar to existing security arrangements. A Trans-Pacific Partnership (TPP) is a free trade agreement promoted by the US in the Asia Pacific Region. During the US presidency in the Asia Pacific Economic Cooperation forum in 2011, it became one of the national foreign policy priorities. According to a research fellow in the International Security Program at the Belfer Center, Harvard Kennedy School Key Koga, “using TPP, the United States aims at creating certain global economic rules in the region and beyond”. In the State of the Union address in February 2013, President Obama announced talks on “comprehensive Transatlantic Trade and Investment Partnership with the European Union” to complement the future US-centered free trade zone in the Asia Pacific.

TPP talks are widely seen an alternative to China’s ASEAN+6 integration project that is aimed at fostering its economic development. “China has been participating in several multilateral fora in East Asia since the 1990s, such as the ASEAN Regional Forum (ARF), ASEAN+3, ASEAN+1, East Asia Summit, ASEAN Defense Ministers Meeting, etc. Their aims are both to increase China's balance of influence vis-a-vis the United States, and to accommodate/reassure those states which might be threatened by China's rise” – says Dr. Koga.  “Russia is not consistent about its East Asia policy. Even though Russia says that it is taking its "rebalancing" or "pivot" policy, it is not clear to what extent Russia can maintain such a policy as the United States.” Russia has been mildly supporting ASEAN+6 format against TPP although it is not eager to participate fully in either of them. According to the Director of ASEAN Center at Moscow State University for International Relations Victor Sumsky, “there are no clear benefits for Russia in supporting TPP while negative aspects, including unnecessary complications in the relations with China, are quite obvious”.

Safranchuk agrees that it is too early for Russia to consider taking sides in economic alliances. “There are many possible options yet beyond those that are on the table. For example, there is a possibility that there will be no agreement on the Transatlantic Partnership as Europeans very well understand that natural gas price in the US is 2-3 times lower than in the EU creating a competitive advantage to US companies”.

Balancing partners, policy and regional priorities in Russian foreign policy is often seen as lack of commitment. Yet, in the case of the Asia Pacific and global strategy, certain ambivalence may be a productive approach as overall it slows cold-war style coalition building in the region. According to Sumsky, “for its economic development Russia is interested in an evolving status quo, not radical changes in the region”.  Being a smaller economic and conventional military power than the US and China, Russia can still be an important player if it utilizes its soft power potential in the Asia Pacific to be a smart power.