Syria: Does the path to peace run through Geneva? 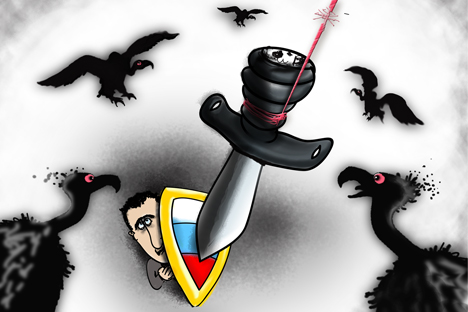 The campaign to resolve the Syrian crisis has entered a new phase. However, if the upcoming international conference, dubbed Geneva-2, focuses entirely on increasing the pressure on President Bashar al-Assad, there will be a long way to go before peace is achieved in the war-torn country.

Moscow and Washington agreed on May 7, during U.S. Secretary of State John Kerry’s visit to Russia, to hold an international conference to help resolve the Syrian crisis. In an unprecedented move, Russian Foreign Minister Sergey Lavrov and Kerry decided to join efforts for the first time to have representatives of both the opposition and Damascus take part in the conference.

A week later it was reported that the conference would take place in Geneva under the auspices of the United Nations at the level of foreign ministers. Moscow insists that the key countries of the region should be engaged, specifically Iran and Saudi Arabia.

Essentially, this is Geneva-2, i.e. a reproduction of the same conference that took place last year in the same Swiss city. Back in 2012, the participants agreed that a political dialogue was needed between the conflicting parties. However, no such dialogue has been launched so far.

The main reason for this is that the West, its allies in the Middle East and the Syrian opposition all insist on al-Assad’s stepping down as the main condition for the country to start resolving the conflict.

Meanwhile, Moscow seeks to have the crisis resolved without any external pressure. Such forceful changes of power with the help of external forces have resulted in violence in Yugoslavia, Iraq and Libya during the last 25 years alone.

Given Putin’s lack of enthusiasm at his meeting with Kerry in the Kremlin on May 7, Moscow and Washington are still divided on this crucial issue, and neither side is ready to make concessions.

This, however, has not stopped political maneuvers — British Prime Minister David Cameron recently visited Russia and the U.S.; Israeli Prime Minister Benjamin Netanyahu paid visits to Beijing and Moscow; the Turkish prime minister had a recent visit to Washington; and the U.S. Secretary of State and the Russian foreign minister communicate on a regular basis. However, the problem of al-Assad remains front and center.

Syrian Information Minister Omran al-Zoubi has said that the Syrian authorities wouldn’t attend an international conference to resolve the conflict with the opposition if such a conference discusses whether al-Assad should stay in power or whether the constitution should be amended.

Meanwhile, Kerry has made it clear that the United States would like to see the Syrian leader among the participants in Geneva-2.

The Syrian leader faces the threat of an increase in support for the opposition, which will include both a doubling in the amount of support by the U.S. by 2014 and the lifting of the embargo on arms supplies by the EU.

The United Nations is putting pressure on Damascus as well. On May 16, Saudi Arabia and Qatar initiated a new resolution by the UN General Assembly to condemn Damascus. However, the current trends are not in favor of the Persian Gulf monarchies.

The direct use of force is just as important. Evidence that Damascus has used chemical weapons is reason enough to begin an international military operation in Syria, although no proof may be required, as was the case with Iraqi biological weapons.

The sword of Damocles is hanging over al-Assad’s head, and there is a good chance that no UN Security Council resolution will be required to use force. This became clear after Israeli warplanes carried out two strikes in Syria on May 3 and May 5. Turkey is also threatening Damascus, believing that Syrian special services are behind the May 11 attack in the town of Reyhanlı.

Thus, the alternative to his intractability is clear to al-Assad. However, if pressure on the president becomes the key argument during the Geneva talks, there will be no peace in Syria any time soon.

Andrei Ilyashenko is a columnist on the Middle East issues for several Russian media and military magazines.