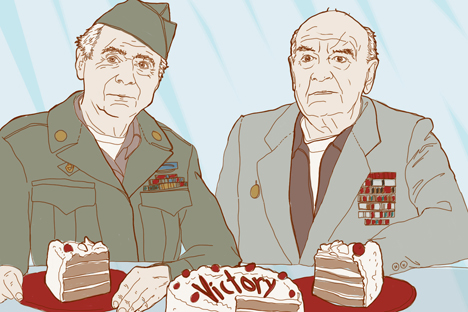 The historical memory of World War II is as significant to Russia as democracy and civil rights are to the U.S. The two nations have plenty of reasons to celebrate together on the same date, but venture to add that this may not be enough.

Drawing by Natalia Mikhailenko. Click to enlarge the image.

On Memorial Day, May 27, Americans will stand on the sidewalks of each Main Street  and watch their beloved veterans march by.  Russians recently celebrated May 9, Victory Day, a day few Americans take note of. So, the two nations have plenty of reasons to celebrate together on the same date, but venture to add that this may not be enough.

It would be a wonderful feat if on April 25 — Elbe Day, when Russians and Americans first celebrated the unified victory over fascism on a bridge over the Elbe River — the two countries could share their memories of common victory, the most important achievement of the 20th century.

But this would just be the beginning. In order to see what we mean, we can compare the role of historical memory in these two societies. World War II remains the most significant historical event for Russians, and it is the memory of the victims and the Great Victory that unites the country like nothing else.

Americans rely on other sources to maintain their unity. The most important are probably the shared values of democracy, political freedom and civil rights.

If Russians manage to understand that democracy is not mere words, and if Americans understand that “the Great Patriotic War” (as Russians call World War II) is not just a chapter in history books, we will understand each other much better.

This past May 9, Victory Day, Russians of all ages and generations celebrated their war veterans, visited war memorials and Victory parks, watched fireworks and ate delicious meals — as Americans will do on May 27. It is the day when Russians see themselves as one people more than on any other day of the year.

We can also outline a path to bring the two nations closer. The Americans, whose fathers and grandfathers fought in World War II not only to protect their land, but also to preserve democracy in Europe and the U.S., should consider that it was the heroism of the Soviet people that helped save democratic nations from the Nazi invasion.

We haven’t heard Russian leaders sincerely commit to the values of democracy and freedom in a long time. Apparently, Russian politicians lack an understanding that Americans are very serious about these values. Once they bridge this gap, it will be easier to move forward together.

Countries and people may have diverse interests and may not agree on all issues on bilateral and international agendas; however, a better understanding of each other’s motives and values will help reduce conflict in the relationship.

This understanding could become the main achievement of Russian-American relations in the new century.

In the United States, May 9, and even May 8, are not seen as important. The date when Americans joined the war in Europe has much more significance. Apparently, it is not the victory that remained in the national memory, but the determination to fight the Nazis.

Another memorable day, April 25, the link-up on the Elbe, hardly rings a bell in Russia and the U.S. The handshake of two soldiers became a symbol of a new world, and a new world order, in which the Soviet Union and the U.S. would dominate.

During the Cold War, as well as unreasonable moves by the two nations in the last few decades, Russia and the U.S. have accumulated a slew of mutual accusations and complaints.

One way towards restoring mutual understanding is to share the memory of the military alliance and sacrifice that the two nations made in their fight against their common enemy.

This Memorial Day, Americans might think about the heroism of the Soviet people and the sacrifices made to eradicate Nazism.

And Russians might understand and appreciate the heroism of the Americans on June 9, when they remember those who gave their lives during the Normandy landings and those who fought in Europe and in the Pacific.

It was the Soviet-German front that determined how World War II would end. Yet no one really spoke about this in the U.S. during the Cold War. President John F. Kennedy was the first one to mention the role of the Soviet people in the war after 1945 in an American University speech that paved the way for a brief yet intense rapprochement.

Charles Sullivan is a PhD candidate at George Washington University in Washington,D.C.