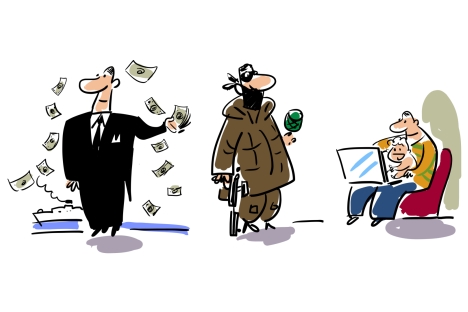 As a middle-class Muscovite in the UK, I find it difficult to escape the notion that I’m on a mission: to prove I’m not an oligarch, hitman or benefit scrounger.

UK immigration has always been a fun topic for expat Russians living in London (of which I been one for the last seven years). Every time Russians meet each other here, you inevitably end up talking about visas, passports and other papers and documents that the aboriginal population (i.e. Queen Boadicea’s compatriots) have the luxury of not having to worry about.

Let’s all move to Moscow-on-Thames

You can probably imagine that the current Coalition Government hasn't exactly made our lives easier, either. Recent measures designed to limit immigration to “tens of thousands” rather than “hundreds of thousands” mean that it became virtually impossible for non-EU residents to come to live in the UK (some of my British friends are surprised that Russia is not a part of the EU, by the way).

The policy creates a long-term problem by closing the door to a highly-skilled workforce from abroad. Previously the only way to get into the UK from outside the EU was to have the right qualifications, education, experience and salary level. This was the system that brought all those people who helped Britain to become an international hub for creative industries, banking and IT.

Another category of migrants that have fallen victim to the new rules is Russians with UK university degrees, who previously had the opportunity to work in Britain for a year after graduation. This was a year to shine and prove to potential employers that they were worth the visa hassles it took to hire them. Now these talented people go straight back home after they receive their world-class UK qualifications.

Surely, they have left some space for the super-bright, you say? They have. There’s a quota of 1,000 visas for the “exceptional talented”. But how many of these visas were issued last year? The answer is: 37. I guess those people must feel really exceptional.

There’s another interesting side-effect of this immigration policy; Russians here live in a never-ending identity crisis. Middle-class people the world over are prone to this, but somehow it’s worse for Russians. Due to the aforementioned visa and immigration rules, you literally have to be a middle-class Russian to live here.

And yet (due to some unfortunate media stereotypes), Russians living in the UK are almost always assumed to be not middle class, but one of two categories: one is a more-money-than-sense oligarch-biznesmen - who has a model wife (plus girlfriends), private jets and billions of skeletons in numerous walk-in closets.

The other one is a good old-fashioned Daily Mail migrant: an unskilled, uncultured mythical creature that somehow manages to pull off the impossible - to steal British jobs and claim benefits at the same time.

So for the first five years you are in the UK, you feel like you are Tom Cruise on “Mission Impossible”.

British student about his life in Russia

You must prove to your British friends that you do not have an oil company back in the Motherland, that you are not planning to sue your former boss (ex-comrade!) for billions of pounds for providing a mafiakrysha (yes, unfortunately, all my British friends are now familiar with this term from the 1990s), that gunmen are not after you and even the KGB are fairly unlikely to slip polonium into your milky English tea.

Last year, I went to the opening of the Russian Film Festival on Piccadilly. The organisers picked a film by Boris Khlebnikov, “Till Night Do Us Part”, a brilliant comedy set in a Moscow restaurant. All the dialogue and characters in the film were based on actual people and conversations overheard by a journalist. To me it looked like a cruel, but fairly true representation of Moscow zeitgeist.

But in a discussion that followed the film, opinions among the Russians were split down the middle.

Half of them (still on the Mission!) were furious, because they had invited their British friends to show the cultured life of Russians in London, and what they got instead was a film that reinforced all the newspaper stereotypes: Russian women choosing between love and money, the creative class completely out of their depth, mafia types ordering hits, hungover party people and other assorted fauna.

And the other half? Well, they must have just given up on the Mission. The reality for most of us Muscovite Londoners is that we just learn how to live with these ghosts. When we turn on the telly and yet another Russian billionaire has just bought yet another Premier League football club, or a London newspaper - well, you just shrug, and remember that you need to buy nappies.

Konstantin Pinayev works as a market research executive in London. His popular blog, Notes of an Emigrant, can be read in Russian at: http://moscowlondon.livejournal.com/