Kudrin as a successor to Medvedev? 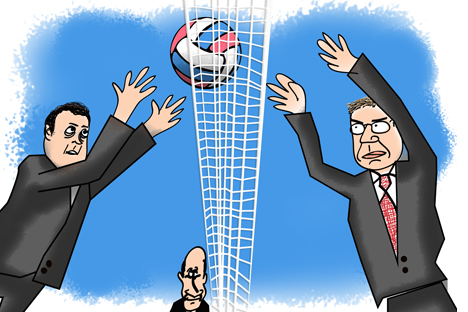 The former finance minister looks to be a contendor to take over as the country’s next prime minister, but Dmitry Medvedev may just have continue with the second highest post in the country.

There has been a lot of noise about the possibility of Russia’s  Prime Minister Dmitry Medvedev being sacked and replaced by former Finance Minister Alexei Kudrin. We think it will happen – just not yet, but possibly as soon as this autumn.

President Vladimir Putin is partly driving the speculation. He has gone out of his way to be nice to Kudrin, who quit his job last year following a very public row with Medvedev over military spending. On several occasions, Putin has singled out Kudrin for public praise and made it quite clear that he is still a senior Kremlin player.

So what is going on here? According to the speculation in Moscow, Kudrin has been offered several high-level jobs, including the head of the Central Bank and most recently head of the presidential administration, one of the most powerful roles in the country. But according to the conventional wisdom here, Kudrin has turned everything down – and is holding out for prime minister.

Certainly, Kudrin has been behaving as if he were running a campaign and has been a very vocal critic of the government recently, calling for deep reforms to avoid economic stagnation.

"Even if we roll up our sleeves and set to work right now, we’ll need from three to five years to achieve new elements of efficiency," Kudrin said at a parliamentary hearing.

Kudrin laid some of the blame for Russia’s current lackadaisical growth at the feet of the ruling United Russia party, saying: “The political system is lagging behind the challenges of time, and does not ensure the mechanism for arranging the modernization of the country.”

He also dismissed the economy minister’s optimism (and that of the consensus in the market) that growth will pick up in the second half of this year.

Given that the media is largely state-controlled, Kudrin’s high-profile, sharp criticism wouldn’t be possible without a nod from the Kremlin.

Analyst Chris Weafer speculates that Kudrin is being used as a goad for two objectives.

“One was Putin showing the Russian people that the man they consider the proverbial ‘safe pair of hands’ is waiting in the wings, so that if there is any crisis he can be called upon," He said. "The second objective was to remind the current PM and his cabinet that if they mess up and can’t deliver an improved economy, then the next PM is currently on your TV screen.”

This is probably true. To understand the situation fully you have to first assume that Putin is a long-term planner who has already mapped out his program through to 2020: Phase II of his long-term strategy. Phase I, which ran from 2000-08, was about taking back control of the political system from the oligarchs, patching up the worst economic problems and beginning the second round of large privatization.

Phase II phase kicked off with Putin’s inauguration last year, and has the goal of asserting government authority again – this time over its own employees, who have been helping themselves. And the reform roadmaps, initiated last May, are an attempt to systematically improve Russia’s system from the ground up.

In practical terms, this means Putin has several clear stages to move through. He pre-empted the roadmaps at the Sberbank investment forum in 2011 while still prime minister, but in the last nine months nearly 30 roadmaps have been launched and all are in the hands of Medvedev to formulate and implement. However, these are only a first preparatory stage; implementation comes later.

In parallel to setting the economic agenda, Putin also launched the main thrust of his political strategy: take tighter control over the government, i.e. crack down on graft.

An attempt to institutionalize this campaign came a few months ago with new laws that ban deputies and government officials from owning assets abroad. This is a big agenda. In 2000, when Putin called in the oligarchs to a now infamous meeting, there were only 20 men to cajole; this time he has a staff of well over a million officials and bureaucrats to bring in line.

It is clear that Medvedev is politically vulnerable at the moment. The current economic slowdown was widely expected (although it has been more extreme than expected) and clearly Medvedev is an ideal scapegoat who can be sacrificed at any time. But while Russia is suffering economically and the people are worried, things are not bad enough yet to play the “sack Medvedev” card.

No risk of recession in Russian economy this year – Kudrin

Kudrin against ban on foreign bank accounts for officials

Several Russian newspapers have speculated that he will go in the autumn – and then only if the economy falls further.

A second argument for delay is that Putin’s political capital is actually very limited. He has just launched a very frightening attack on his own political machinery and so he needs to be on top of that process before he can think of yet another shakeup. The audits of both deputies and state companies are going to be ready in June or July when the process of enforcing the new rules will start.

Bringing in Kudrin is bound to cause a dislocation. The word in Moscow is that not only does he want to be prime minister, but he wants sweeping powers to make real reforms, which will end up treading on a lot of the elite’s toes. And Kudrin, like Gref and Medvedev before him, would need a lot of support from Putin to make his changes stick.

Bringing in Kudrin would be a watershed in reality, but also for Russia’s image. Foreign investors love Kudrin and would give their eyeteeth to see him appointed PM with real power to effect change. It would certainly be followed by a big uptick in both direct and portfolio investment. This is a very sexy card to play, given the government’s stated goal of increasing investment, so the timing should be done to maximum advantage.

When is that? Certainly not now. Russia is right at the bottom in the currency global popularity stakes. The situation should improve if the widely expected global economic pickup in the second half of this year kicks in. Or indeed wait until next year when the recovery in Russia and elsewhere is a lot more robust. Or possibly he will wait longer than even that, as this is a seven-year campaign: leave Medvedev to do much of the dirty work and bring in Kudrin to polish after.

Of course, none of this could happen at all, but I can’t think of a simpler and sexier way to turning the Russia story around and getting people interested in it again as a business destination.

Ben is the editor of Business News Europe (BNE) and an Eastern Europe specialist, who has been covering Russia since 1993. He is a former Moscow bureau chief for the Daily Telegraph and a regular contributor to The Wall Street Journal, The Financial Times, Institutional Investor.