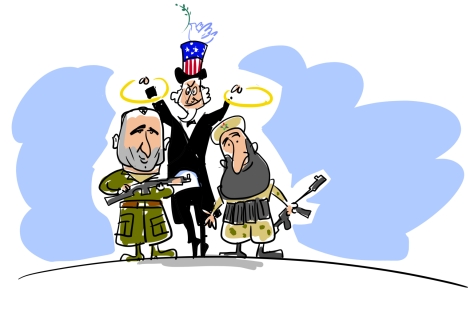 It seems that all external players are aware that the upcoming peace conference on Syria will serve as a turning point. If a shift occurs in favor of a compromise between the warring parties, it will be a truly historic event, given the long-standing impasse.

Arrangements for the forthcoming peace conference on Syria are being made, accompanied by reports of Russian arms in the country. Western headlines abound with leaked information about Yakhont missiles and S-300 anti-missile systems, which are either already there or on their way. Moscow refuses to be drawn into the polemics, though it does not deny the rumors, citing that old contracts must be honored.

It is notable that the expected wave of accusations of bloodthirsty cynicism and blatant double standards against Russia is quite muted — at least on the part of the West (the pronouncements in the Arab world are tougher). What exactly is happening on the Syrian political front, which has turned into a major global arena?

It seems that all external players are aware that the conference will serve as a turning point. If a shift occurs in favor of a compromise between the warring parties, it will be a truly historic event, given the long-standing impasse. Nonetheless, even if no rapprochement emerges, the status quo will not last, with the likeliest outcome being a sharp escalation of the conflict.

Such a failure would be a signal to the opposing forces that a solution can only be found on the battlefield. The participants and their patrons in neighboring countries would triple their efforts in an attempt to turn the tide in their favor. Proponents of self-restraint (of which the Obama administration is one) would find themselves under intense pressure: How much longer is it possible to sit by and watch as the streams of blood become rivers?

Direct intervention is all but off the table, but the calls of lobbyists demanding that the rebels be armed will be hard to resist. Russia, for its part, will continue to do everything it can to preserve the balance of power — which means assisting Damascus. A new spiral of tension is inevitable, the consequence of which could indeed be an indirect Russian-U.S. confrontation: a so-called "conflict by proxy." Many believe this to be the case already, but that is not so.

Russia's latest steps are intended, according to Moscow's logic, to improve the chances of the peace process. The Kremlin is steadfast that any alternative would only worsen the chaos, since the allies of Damascus will not allow its opponents to gain the upper hand. And they will avoid intervention at all costs.

It is a harsh and fairly risky game to play. Supplying advanced weaponry to either side at the height of the conflict is not a noble act and, in terms of image, makes for a vulnerable position. True: Russia is deliberately supplying Syria with defensive means, which can only be used to prevent a large-scale intervention. From the very outset, Moscow has clearly and unequivocally opposed any Libya-style involvement.

Generally speaking, in respect of the Syrian hostilities, Russia’s stance is both intransigent and consistent — two qualities by no means inherent to Russian policy, which have therefore wrong-footed its partners. Over the past two years, Moscow has been coaxed, exhorted, criticized, abused and mocked for its alleged short-sightedness. Bemused observers have constantly looked for signs of a softer approach... But to no avail.

Russia's intransigence today is more imposing than it was a few months ago, partly due to the fact that Russia has palpably demonstrated the futility of any attempts to manage the conflict without its assistance. The second reason is the increasingly gloomy outlook for the future of post-Assad Syria, widespread among foreign supporters of the opposition.

The prospect of the country splitting along religious and ethnic lines now seems more than likely, and that will almost guarantee the spread of the conflict into neighboring countries, including Turkey, Jordan, Lebanon and the highly fragile Iraq.

Although Russia may have made symbolic gains (its status as an indispensable player is fully recognized), the achievements are small-scale in practice. From the outset, Moscow has acted as a conservative power. It has tried to resist the destructive impulse of change, fearing the inherent instability generated by the ongoing revolutions will have a resonance effect that may one day be felt in Russia itself — in various forms, all the way up to jihad in the Caucasus.

The fears are entirely legitimate, but such an approach is dispiriting. No matter how the war ends, stability is a thing of the past. Regardless of whether Assad remains, or whether the handover of power is smooth or tumultuous, the former Syria no longer exists.

I repeat: Stability is a thing of the past.

Moscow's principled stand will be justified only if it results in some kind of political solution. But, if the Syrian conflict ends in collapse, Russia could step aside, in which case two and some odd years of painstaking effort will go to rack and ruin, reinforcing the country's unpleasant reputation as an ally of yesterday's people.

When the Syrian bloodshed comes to an end (in whatever form that may be), there should be an international "black box analysis" to determine the points at which an escalation could have been prevented and a resolution found — not to punish the guilty, but to draw lessons for the future. But that will not happen. In modern politics, lessons are not drawn as a matter of principle. The proverbial rake in the face reigns supreme.