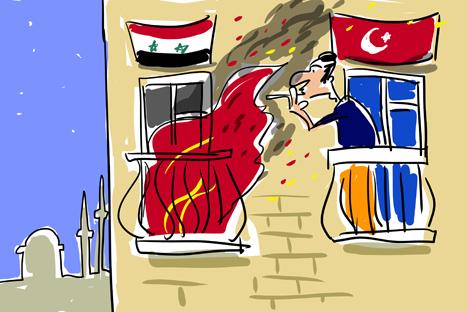 While the protests against Turkey's government show wide discontent in society over various issues, they are unlikely to lead to full-scale revolution

For several days now, Turkey has been seeing mass demonstrations against the ruling party’s policy, with demonstrators calling for the resignation of Prime Minister Recep Tayyip Erdoğan.

In the capital of Ankara alone, the number of demonstrators reached 20,000, and police and army units have been deployed to secure state institutions.

In terms of structure and dynamics, the events are reminiscent of the wave of protests in late 2010–2011, which triggered the Arab Spring in the Middle East and North Africa. Has the “Arab awakening” reached Turkey, and will it develop into a Turkish “hot summer”?

The mass protests in Turkey were triggered by a seemingly insignificant event. The Turkish authorities decided to cut down the trees in Gezi park (one of Istanbul’s few parks located on the European side of the city, near Taksim Square), to widen the road and clear the space for a retail center and a parking lot.

The rally staged by the protesters against felling the trees was dispersed by police, with the help of tear gas and a water cannon. The local media reported a large number of arrests.

Unexpectedly for the authorities, solidarity actions flared up in many Turkish cities and quickly developed into mass demonstrations against the regime.

The felling of the trees in the park and the crackdown on the demonstration in support of the park — like the similar events that led to the Arab Spring — were just the catalyst that caused the pent-up discontent with the ruling regime to erupt into the open.

In Turkey today, some accuse the moderately Islamic Justice and Development Party (JDP) of pursuing “Islamization” of the country; others accuse the party of dragging its feet over reforms.

Many are disenchanted with the country’s foreign policy. It suffices to cite the failing “Zero Problems with Neighbors” doctrine put forward by Foreign Minister Ahmet Davutoğlu, which involves not only dialogue but also the use of force to keep neighboring countries in order.

The Turkish press has dubbed it “zero neighbors, zero problems.”

It has to be noted that, over the last 10 years, the Turkish Republic has experienced massive transformations, and, today, the world community is dealing with an entirely new country ideologically.

With the advent of the JDP, secular Turkey set about building a moderately Islamic model, which Turkish experts juxtapose to the radical Iranian model.

How did this come about? Throughout the republic’s history, at the slightest sign of departure from the secular way of development, the military has staged coups, taken power into its hands and quickly carried out a series of reforms before giving power back to the civilians.

Erdoğan, however, showed more prudence than his predecessors.

Unlike them, he did not directly raise the Islamic topic as prime minister, while slowly but steadily transforming the judiciary, initiating criminal cases against the military, creating an economic base through Islamic funds and fostering a loyal new elite.

Yet the potential of the demonstrations to develop into a full-scale revolution is not high, the main reason being lack of charismatic leaders: In Turkish political tradition, people look not to parties but to individual leaders.

The opposition in Turkey is highly divided not along clan lines but along social and political lines.

The ideological tenets and interests of social classes are so heavily politicized that there is a danger they might develop into a civil war in the absence of national bonds — the principles of the founder of the Turkish Republic, Mustafa Kemal Atatürk — which held the nation together for 80 years before the JDP came to power.

The goings-on in Turkey cannot but concern the word community. The country is wedged between Europe and Asia, the Balkans and the Middle East. It meets part of Europe’s energy needs.

Internal political stability in the country is critical for European security, since Turkey has the second biggest army among the NATO countries and a far-flung network of bases (for example, Incirlik). It is also the closest ally of the U.S. in the region.

Moreover, events in Turkey are important for stability in the Middle East, because many Arab Spring countries have embraced Turkey’s moderate Islam model and, in many ways, look to Erdoğan’s policy.

Russia’s interests may come under threat, too. Projects worth billions may be frozen: for example, the building of a nuclear power plant in Akkuyu, the running of pipelines and tourism.

In the short term, the protests are likely to fade out. The chances of them turning into a revolution or a civil war are low. Yet the world community would do well to follow the principle: “Hope for the best, but prepare for the worst.”

Vladimir Avatkov is a Turkey scholar who teaches in the MGIMO Military Department and in the Middle and Near East Languages Department.