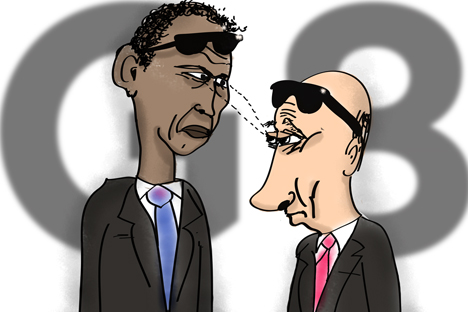 The upcoming G8 summit will show whether the U.S. President and his Russian counterpart will be able to see eye-to-eye on deadlocked issues during their meeting.

Both U.S. President Barack Obama and Russian President Vladimir Putin come from humble beginnings, but the waves of social change that brought them both into power at home are moving in opposite directions. Can these two cautious heads of state find enough chemistry between them to work out deadlocked issues during their meeting in Northern Ireland?

Barack Obama and Vladimir Putin have met twice. The first time was in the summer of 2009, when U.S. President Obama visited Moscow and met with then Russian Prime Minister Putin, who had previously served two terms as the head of state. The second meeting took place in the summer of 2012, when Putin — once again president — attended the G20 summit in Los Cabos, Mexico.

The first meeting turned out to be an extended monologue over tea and caviar. When Obama asked about bilateral relations, Putin delivered a 40-minute speech on what he thought about Washington’s policy and the implications of the George Bush presidency, in particular.

President Obama listened attentively and promised to think about what his colleague had said. As a result, a real “reset” was initiated that fall: a process of diplomatic exchanges that took relations out of the impasse they were in during the second half of the 2000s.

The atmosphere during the second conversation was strained. Putin had just returned to the Kremlin as president, pushing aside Dmitry Medvedev, with whom Obama had been getting along quite well. President Putin began his third term by refusing to attend the G8 in the United States and visit his American counterpart.

All of the commentators noted the detached expressions on the faces of the two men, but the final document was a masterpiece of correctness, with the parties neatly sidestepping all the controversial issues and concentrating only on what they had in common.

How Washington took a few pages from Stalin's Book

The background for a third meeting of the two heads of state — to be held in Northern Ireland — is extremely unfavorable. Toward the end of 2012 and the beginning of 2013, Moscow and Washington were at loggerheads over issues that belonged to the idealistic sphere and had no bearing on real politics.

Then followed an uneasy period of stabilization, when both sides indicated they did not want to quarrel. If the Northern Ireland meeting passes off in a restrained and calm manner, at least the bar will not be lowered.

If you look at their lives, they have only one thing in common. Neither Putin, who grew up in a working class neighborhood in Leningrad (present-day St. Petersburg), nor Obama, a mixed-race African-American of exotic origin who spent his childhood in various corners of the world periphery, could have imagined what heights they would reach.

Both reached the political Olympus by chance. On all other counts, they are antipodes.

Obama comes from the milieu of grassroots social activists and became a professional politician through his work in civil society. A truly charismatic public leader, he is able to gain support from both small local communities and big constituencies or states, and to persuade them to do whatever he wants or needs.

Putin is the product of a closed-caste organization, where publicity and open policy made a person somebody to certainly keep a sharp eye on, if not an enemy altogether. Furthermore, this structure is based on a hierarchy.

Although the meteoric rise of both Putin and Obama is the result of fundamental changes in the social mood, the directions of these changes are divergent.

Obama was elected on the people’s desire to see change. Putin was elected by a country weary of interminable change and wanting to see stability.

More importantly for foreign policy, Obama and Putin both have a sensitive ear for the fundamental changes taking place in the world — changes that do not permit America and Russia to behave as they did before.

What Obama’s critics describe as a lack of principle and weakness — his cautious attitude toward conflicts, reluctance to interfere without a need, and relative indifference to issues of democracy — are, in reality, his convictions that the environment is not what it used to be and the tried-and-tested recipes may turn out to be counterproductive.

Putin also feels that one should tread carefully in the modern world. He has a much deeper and stronger sense than most Western politicians of how things are interconnected and how dangerous it is to act without carefully weighing the consequences — hence his genuine commitment to the status quo, both in his foreign and domestic policies.

The Russian president, in addition, is very sensitive to issues of national prestige, which he is prepared to go to great lengths to boost. He thinks Russia was too humiliated by events in the 1990s to make any concessions today.

Obama is in a different situation: America, from his point of view, is so great that it can well afford a couple of small steps backward and toward greater flexibility, as long as something useful emerges. This is humiliating to many Americans. However, it is unlikely that anyone can charge him with retreating on substantial or fundamental issues.

The two presidents are unlikely to develop a chemistry. Nor is there a need for it. What is more important is that both are convinced that a cavalier attitude in the modern world should be avoided. Both are basically in the mood to make a deal, even though they think of it in different terms.

Finally, the most important thing: In spite of their huge power (and both Putin and Obama are among the world’s most powerful people), the dependence of the two presidents on the spontaneous course of events is greater than their ability to influence them. However, neither would ever admit it.

Fyodor Lukyanov is the head of the Council on Foreign and Defense Policy, the editor-in-chief of the Russia in Global Affairs magazine.