Russia-US: No compromise over missile defense yet 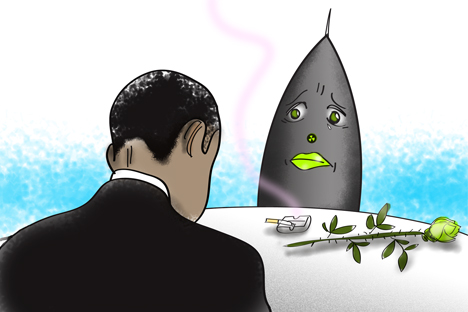 The missile defense controversy will remain in the Russian-American relationship for a long time, unless the presidents of the two countries manage to find a reasonable compromise at their meeting slated for this September.

Missile defense and the Syrian issue are expected to top the agenda for the meeting between the presidents of Russia and the United States on the sidelines of the G8 summit in Lough Erne, Northern Ireland, on June 17–18.

It is hard to say what new benefits Barack Obama can offer Vladimir Putin in exchange for Russia taking a softer stance on missile defense. Most likely, Obama will try to convince his Russian counterpart that U.S. defenses in Europe are not aimed at Russia, and that the capacity of the U.S. missile defense to have impact on the Russian nuclear containment potential is limited.

In the meantime, the recent exchange of messages between the two heads of state revealed that Russia and the United States remain divided on this issue. Russian representatives have been making repeated statements that Russia wants additional guarantees – namely, a legally binding agreement stipulating that U.S. defenses are not aimed against Russia.

The U.S. will hardly meet Russia’s requirements. For one thing, 11 years after they unilaterally withdrew from the 1972 ABM Treaty, there is no sense in them renewing it, especially given the progress in their missile defense program. The U.S. Senate – controlled by the Republicans – will never pass any sort of treaty limiting missile defense, which the Republicans have already made clear.

On the other hand, we should understand why the United States is ready to seek compromise over missile defense. It is crucial for Obama – both personally and politically – to go on with the campaign for Russia and the United States to cut their nuclear stockpiles.

However, it seems that the ambitious program to reduce the nuclear threat that he announced in Prague in May 2009 is not the main reason for this; nor is the resolution that the Senate adopted when ratifying the New START, which requires Obama to begin negotiations with Russia, with the aim of reducing the Russian stockpile of non-strategic nuclear weapons.

One gets the impression that Obama wants to make it into history books as the politician that made the reduction of the nuclear threat his chief foreign policy priority and succeeded in implementing most of his plans, thus proving that he is worth his Nobel Peace Prize.

Does Russia need to further reduce its nuclear arsenal, especially its non-strategic weapons? I am sure it does not. First, the New START stipulates limitations on strategic offensive arms – both warheads and carriers – that suit Russia.

Furthermore, these figures are used as benchmarks by the program for the modernization and development of Russian strategic nuclear forces. To further cut the nuclear stockpile (for example, to 1,000 warheads, something that leading U.S. experts insist on) amid active efforts by the United States to build up its missile defense capacity would be illogical, to say the least.

When it comes to the reduction in non-strategic nuclear potential, the situation is even more obvious.

The European segment of the U.S. global missile defense system will eventually be able to replace non-strategic nuclear weapons as this cementing element. Therefore, Washington can quite easily meet Russia’s requirement to concentrate its non-strategic nuclear arsenal in its national territory as a precondition for beginning negotiations for Russia to reduce its nuclear arsenal.

However, Russia’s non-strategic nuclear weapons are an important means of nuclear containment, because Russia borders on many states that either possess nuclear arsenals or seek to build them.

Therefore, efforts to encourage the Russian president to further cut the nuclear arsenal in exchange for the transparency of missile defense programs – especially mutual transparency – obviously have no chance of succeeding.

My guess is that the missile defense controversy will remain in the Russian-American relationship for a long time, unless the presidents of the two countries manage to find a reasonable compromise at their meeting slated for this September. Obama’s agreement to refrain from deploying defenses in Poland and the Baltic and North Seas may cause Russia to take a softer stance.

Naturally, the resolution of the missile defense issue must not be made contingent on the beginning of some process to further cut nuclear arsenals.