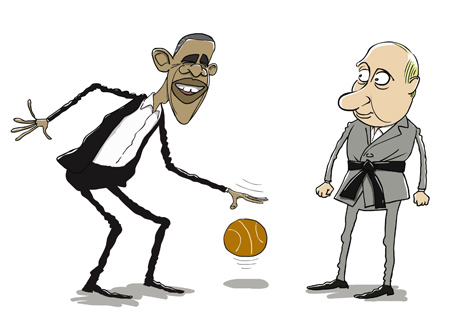 During the G8 summit in Northern Ireland, talks between Putin and Obama revealed conflict. Russia is unwilling to change its stance on Syria, and irreconcilable differences persist on the issue of U.S. missile defense in Europe.

Drawing by Sergey Elkin. Click to enlarge the image.

Russia does not intend to change its stance on Syria. This much became obvious after the Putin–Obama meeting on the fringes of the G8 summit in Northern Ireland. Irreconcilable differences persist on the issue of U.S. ballistic missile defense in Europe.

Even so, the two leaders are trying to find a “positive agenda” for the bilateral summit that is due to be held in Moscow on Sept. 3–4.

“Syria was one of the main topics of negotiations [in Northern Ireland],” the Kremlin press service reports. Putin’s comments on Syria after the talks with the U.S. president were fairly reserved: “In some ways, our positions still differ. But we share a common desire to stop violence, to stop the growth of victims in Syria, to solve the problem peacefully, including through Geneva negotiations.”

Obama echoed this position by saying that, “with respect to Syria, we do have different perspectives on the problem.”

However, one must note that, on the eve of the G8 meeting, Moscow sounded irate: It declared that it considered evidence on the use of chemical weapons by Syrian government troops to be untenable, and it saw U.S. claims to that effect as merely a pretext for launching open military support of Assad opponents.

Arms supplies to the rebels, according to Putin, “hardly have anything to do with humanitarian values that have been preached in Europe for centuries.”

Putin is set to continue opposing military interference in the internal Syrian conflict, even in the face of the consolidated position of the other G8 leaders headed by the United States.

Although the argument seems to revolve around the problem of whether Syrian President Bashar Assad should step down, Moscow’s thinking is based on its fundamental rejection of regime change through outside pressure – as in Yugoslavia, Libya and Iraq – no matter how odious their leaders may have appeared.

Judging from the statements by Russian and U.S. leaders, not an inch of progress was made on strategic stability issues either. “We have a special obligation to try to continue to reduce tensions, to build on the work that we did with the New START,” Obama told journalists after the meeting, hinting that it is high time to continue nuclear disarmament negotiations.

However, Moscow declared back in May that further talks on the topic are unthinkable without linking them to the problem of ballistic missile defense in Europe, which greatly worries Russia.

In general, the Kremlin is only prepared to discuss disarmament on a multilateral basis, in the context of the overall conventional, tactical and strategic arms balance.

Photo of the day: G8 summit in Northern Ireland

Obama is not ready to give this character to his idea of a nuclear-free world.

At the same time, the Putin–Obama meeting undoubtedly marked a step forward from their last talk at Los Cabos, on the sidelines of the G20 a year ago.

At the time, Moscow, by its own admission, scrapped the concept of the “reset” in bilateral relations proposed by Obama. It is not normal to constantly reset a system, but rather a sign of malfunction, as Russian Foreign Minister Sergey Lavrov allegorically described the situation.

However, because the hardware – the Russian and U.S. presidents – have remained the same, there is an obvious need for new software, or, a new agenda.

The joint statement made after yesterday’s meeting notes that Russia and the U.S. “have reached understanding on a positive agenda for relations between our countries.”

This includes regular contacts between the Russian prime minister and the U.S. vice president in expanding trade and investments, as well as launching a 2+2 dialogue between the foreign and defense ministers to discuss strategic stability.

These formats are not new in bilateral relations. Still, cooperation on cyber threats is novel.

The United States and Russia have agreed to establish a communication channel for emergency groups responding to computer incidents between the nuclear threat reduction centers and high-level officials.

This is an overdue step toward creating a code of conduct in the computer sphere between states. Its relevance was highlighted after the Unites States officially admitted that it was developing and using a combat computer program in the Middle East – notably, against Iran.

Finally, the two leaders reaffirmed commitment to increasing cooperation in combating international terrorism, in the wake of the terrorist bombings in Boston and Makhachkala.

However, all of this is just a sketch of a new agenda. The two leaders may discuss it during the U.S. president’s official visit to Moscow on Sept. 3–4. The talks will precede the G20 summit in Russia’s second capital, St. Petersburg. There, Putin will not be as isolated in his position on Syria as he was at the G8 summit in Northern Ireland.